This series on local diner institutions began with a premise that these community fixtures fly under media radar, but deserve wider and brighter exposure. With that stimulus, I sought to learn how long-standing diners have remained relevant and successful, many for several decades. One emergent theme is that the personalities of flourishing diners reflect the beliefs and sweat equity of their owners.

Mike Mihalitsas has owned Mt. Hope Diner since 1989. Mike's parents, Pat and Sandy (the original restaurant's namesakes), opened it in 1966, and ran it with Mike's Uncle Gus for 23 years. This dynamic diner family, at various times, also played ownership and operational roles in both Jay's Diner and the Country Club Diner. To get a sense of Mike's deep roots here, consider that growing up in this same neighborhood, he would often walk from #49 School on Lattimore Road to (then) Pat and Sandy's for lunch. To appreciate the sense of family that still pervades Mt. Hope Diner, consider that Mike's daughter, Dina, and Mike's girlfriend, Lisa, both work as servers, while both Lisa's son and Mike's son, each named John, work in the kitchen. On a recent polar vortex morning, Dina's five-year-old daughter Melody, with school cancelled, wandered about, cheerily chit-chatting with customers and workers alike.

On that morning, as I spoke with Mike in one of the booths lining the diner, the volume of customers stopping by to greet him impressed me. Similarly impressive was the diversity of the clientele and the camaraderie among them and the staff. This was no accident. Mike has made it his mission to know his customers and demonstrate appreciation for them. He and his employees -- many of whom count their years there in double-digits -- are there for customers. 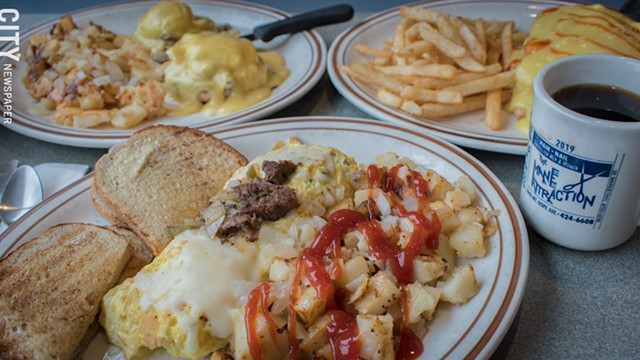 "We're not here to judge, we're here to serve and take care of you," Mike says. "As part of our hiring process, we even ask 'Are you a kind person?'" He added, "We all do our best not to say 'no.' For instance, we'll make just about any kind of omelet anyone requests. Customers must always leave here knowing they're right." One witnesses this readily and regularly during a meal at Mt. Hope.

Mike went on to say, "We're hitting 53 years here and I still see people that have never been here. I need them to know that we care about our product and our customers. I'm still in the kitchen every day. After 53 years I still say 'Thank you' every day."

A distinctively inviting feature unique to Mt. Hope Diner is its Book Exchange rack of books and magazines standing near the entrance. While cleaning out a house ten years ago, Mike found a cache of books, which he then put out to share with customers. This compelled customers to bring in their books to give away, and the Book Exchange was born. It's been self-sustaining ever since.

Then there's the food. I had the opportunity to enjoy three different stalwart sandwiches at Mt. Hope Diner. The fried chicken sandwich ($7.95), a large, thick, crackling-crisp, peppery breast on a toasted hard roll with lettuce, tomatoes, onions, pickles, and mayo was tasty, unpretentious, and filling, making it easy to see how it makes the restaurant's best sellers (listed at the top of the menu). The sandwich came with similarly crispy, well-cooked fries, to which I added a side of hot, well-seasoned, and importantly, not glutinous homemade brown gravy for dipping.

Another best-selling sandwich, ordered during morning hours (all menu items are served all day), was Dad's Favorite ($7.35). Honoring Mike's father, this sandwich includes two grilled-to-order overlapping cheeseburgers on a slab of Martusciello's French bread. Though it was delicious, I couldn't finish it. This was partly a preemptive move to save stomach space for the sublime rice pudding ($2.65), a dessert any diner worth its salt should do well. Mt. Hope exceeds that threshold. Mike adapted this recipe -- full of cinnamon and vanilla notes, and denser than most, with firmer rice -- from his grandmother, and I loved every aspect of it.

Hot sandwiches with gravy (roast beef, turkey, meatloaf, and the like) are the backbone of any legitimate diner. I chose to indulge in Mt. Hope's hot turkey sandwich ($7.65 with mashed potatoes, of course), and it didn't disappoint. Chopped, freshly roasted turkey breast filled the space between two slices of soft white bread, which was smothered with surprisingly yellow and piquant gravy (again, not glutinous) that also blanketed substantial mounds of creamy mashed potatoes.

Soups are also a hallmark for good diners. Interestingly, Mt. Hope Diner, like Country Club Diner, also serves Manhattan-style clam chowder ($3/cup, $3.50/bowl) daily -- a rarity in our prevalently New England-style chowder culture. Relating his family's connection with Jay's Diner, famous for its New England chowder, Mike explained simply, "Jay's did New England, so we did Manhattan, and it's been that way for 53 years." The warming, tomato-y chowder contains tender clams and large chunks of potato, carrots, and celery. On another day, I indulged in the soup du jour, Chicken Romano ($2.85/cup, $3.35/bowl), a comforting tomato-based soup with shredded chicken, pasta shells, and carrots. 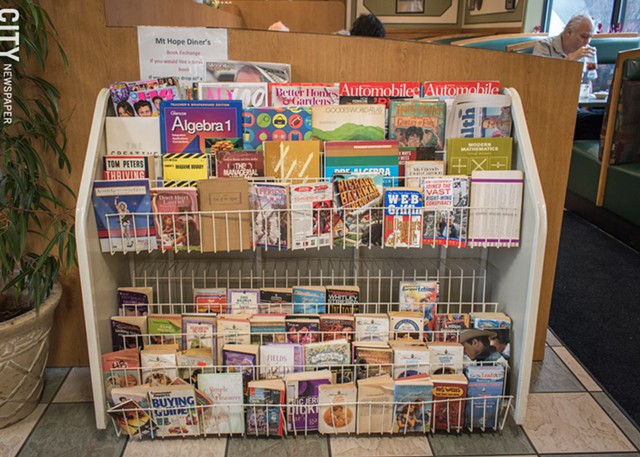