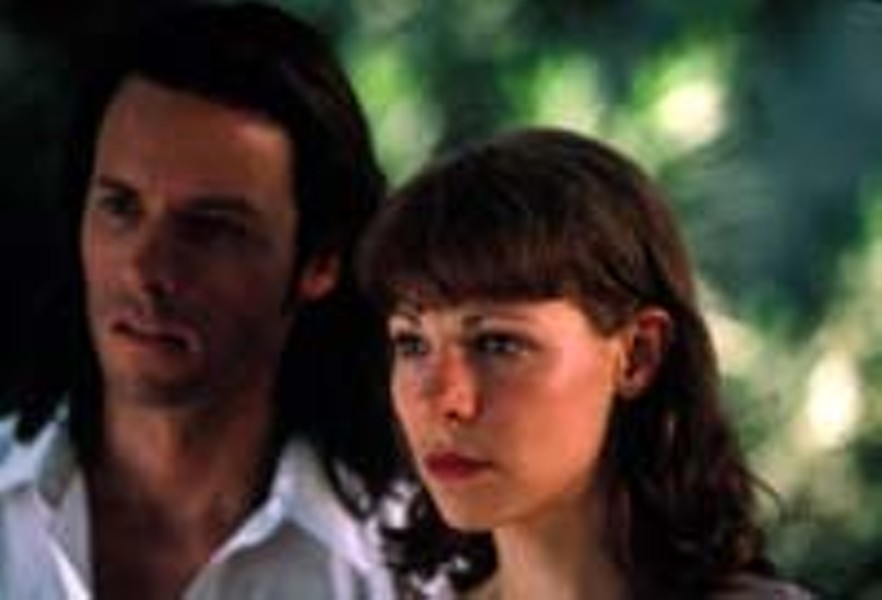 Lions Gate Films All for (obsessive, disturbing) love: Lili Taylor and Guy Pearce in A Slipping Down Life.

Three movies playing around town right now tell tales of obsessive love spawning disturbed behavior. A Slipping Down Life, a pleasantly rewarding indie film just now making it into theaters after five years of technical wrangles, has the most natural approach, and seems in danger of being overlooked for its lack of sensationalism.

The story, based on a novel by Anne Tyler (The Accidental Tourist), takes place in the South without making too much of it, and for once a natural range of Southern accents can be found. More than anything else, though, it takes place in the Land That Time Forgot.

Lili Taylor plays Evie, a depressed kiddie-fair-worker drifting about through the dusty remnants of other eras. Everything in her small town, even the cars, seems hopelessly vintage. This would be a little weird if it didn't work emotionally. (All of the film's few flaws are discreet and relatively unimportant.) The only contemporary thing in town, and thus her way out, is the local music scene, which is where she discovers Drumstrings Casey (played by Guy Pearce with impassive, grungy glamour).

She seizes less upon his music (penned by the likes of Robyn Hitchcock, Vic Chestnutt, and Ron Sexsmith, and sounding creditably like one author) than the pretentious, mystic ramblings he interrupts himself with onstage. It's a measure of what is great about this movie that these spoken interludes are both mocked by the film and endorsed as valid. Evie's obsession leads her to a shocking, disturbed act, which the film treats similarly (as do, charmingly, the other characters).

The emotionally remote musician allows his manager to exploit her as a promotional tool. From there, haltingly, a relationship develops. Watching this play out is a pleasure that lies in the performances, the nuances and rhythms of real life, and great underplayed moments of throwaway humor.

Criminal Lovers (1999) also comes to us five years after its inception. French director François Ozon's (Swimming Pool) second feature appears at first to just offer up two young attractive psychopaths on the road, a boring cinematic trope by now if there ever was one. But when they get lost in the woods and drift downstream in a boat, this cue of Night of the Hunter tells us we are launching on a dreamlike departure from the genre.

Suffice it to say that they start to seem pretty normal once they meet their match in a cabin-dwelling hermit who uh, takes them in. While they deal with that, the film deftly portions out flashbacks that increasingly fill in what at first seemed the sketchy, lazy convention of the murder that kick-started their adventure.

Criminal Lovers is so stately, measured, and assured in the progression of its revelations that it was boggling to learn that in France a DVD release places the events in chronological order. Lucky for us, this version does not, and as it weaves in and out of psychological realism and fairytale allegory, it just gets weirder and weirder. At times, it's so depraved as to be irresistible.

Less so is France's most recent hit, Love Me if You Dare, which has found success by sucking on Amélie's creative exhaust fumes. The film starts out in full dazzle mode with the moment Julien and Sophie inaugurate a back-and-forth game of dare that will last well into their adult lives, mutating from an obnoxious children's game of pranks to an obstacle that keeps them from admitting their love for one another.

The film rarely indulges the view of the children as the brats they are, as it can ill afford to, although when it does it not only feels more honest but makes them more sympathetic (the pranks are a means of acting out the pain of their private lives). Instead the pair is treated as miniature adults, with all kinds of witty dialogue. Precociousness and preciousness are bound together with suffocating whimsy, and we are meant to take delight in it.

The visual flash, which felt perfectly right in Amélie and City of God but feels like mere strategy here, eventually settles down and is replaced by the wringing out of every drop from annoying verbal conceits. If someone said something --- ugh--- symbolic as a child, you can count on it being "cleverly" revisited more times than can be counted when they are adults.

I was eventually swept into the emotional logic of the contrived premise, as with Criminal Lovers, and it became interesting and fun to see the psychotic lengths the two go to to ruin each other's lives (as adults, the pranks move from hurting other people to hurting each other).

But just as I was being won over, a bogus ending possessing less emotional logic than discombobulating poetic pretension forced me away from its aims once more. The poetic force of Criminal Lovers, with strength in its thoughtful simplicity, is far more haunting.