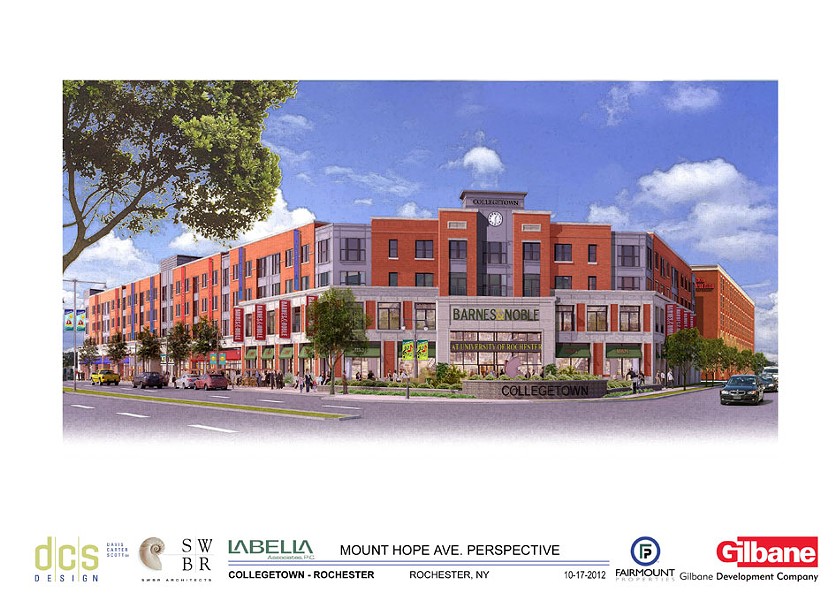 Upper Mount Hope neighbors have succeeded in getting changes to the design of the Barnes & Noble store that will be part of the massive College Town project.

College Town, which was initiated by the University of Rochester, will be built on 16 acres on the west side of Mount Hope between Elmwood Avenue and Crittenden Boulevard. Groundbreaking is expected next spring on the $100 million project, which includes a hotel and conference center, offices, grocery store, and street-level retail with apartments above.

Barnes & Noble, which will be the UR's official campus bookstore, will be built at the corner of Elmwood and Mount Hope.

Dan Hurley, president of the Upper Mount Hope Neighborhood Association, says neighbors weren't happy with the bookstore's design when it was unveiled by the project's developer in October.

"It really seemed to set everybody off," Hurley says. "It just looked really plain. It didn't have the 'gateway' look to it, like the one they showed several months back. Actually, somebody compared it to Erie Harbor."

(Erie Harbor is a new housing complex on Mount Hope. The design, especially the color scheme, has divided many in the community.)

The Barnes & Noble building has been redesigned to add depth, texture, and other features to make it more attractive. It's an improvement, Hurley says, but the design committee working on the project wants even more changes. He talks about making the windows bigger, adding more embellishments, and just making the store more of a presence on its prominent corner.

Also in regard to College Town, the Upper Mount Hope group is working to standardize alternative parking rules to keep people from monopolizing on-street parking.

"The goal is to remove as many cars as we can from the streets," Hurley says.