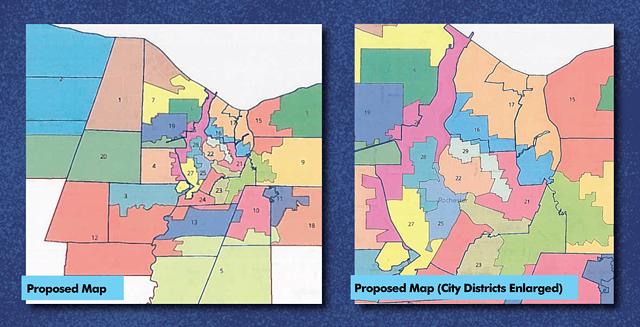 A controversial map delineating new district boundaries in the Monroe County Legislature has sparked infighting among Democratic legislators and is expected to soon be put up for a vote.

At the heart of the fight is a sharp disagreement over how city legislative districts should be drawn, particularly when it comes to ensuring that Blacks, Latinos, and other minority voters have a voice in Legislature races.

“This is a moment in history to correct the wrongs of the past, empower the disenfranchised, and act in the best interests of our community instead of ourselves,” Legislature President Sabrina Lamar said Tuesday during a meeting of the body’s redistricting commission at which it was agreed that legislators would soon vote on the map.

The map on the table would create five districts in historically impoverished neighborhoods that ring downtown Rochester. LaMar, a Democrat who caucuses with Republicans, has been vigorously advocating for that redrawing with Democratic Legislator Rachel Barnhart.

Barnhart has called the proposed map a compromise that would protect the interests of minority voters in a way that’s consistent with federal law — particularly the Voting Rights Act — while making other districts, including suburban ones, more competitive.

“This map makes sure that every voter, in each of those districts, their vote counts the same,” Barnhart said. “That's not true when you put high voter turnout white areas in with areas that are disenfranchised. This map was deliberate, it was thoughtful, and it's a very strong plan.”

But 13 of the 14 other legislators in the Democratic caucus have cast the map as harmful to city and suburban voters alike.

Yversha Roman, the Legislature’s Democratic minority leader, was one of two members of the five-person redistricting commission to oppose bringing the new map to the full Legislature for a vote. She made her case by pointing to the current map, which has six districts in the city where minorities make up a majority of the voting-age population.

The proposed map, she said, would take parts of some heavily Black neighborhoods and “pack” them into adjacent districts in order to create the five majority-Black districts. She said that could have the effect of diluting the city’s growing Latino population.

Roman and other legislators have suggested that Barnhart’s district, which is based in Beechwood, would become whiter under the new map.

"We want communities to remain as intact as possible, specifically in the city of Rochester, so that constituents will be able to be engaged by their legislators,” Roman said. “We want minority-majority districts that allow for the voice of disadvantaged communities throughout Monroe County. We are opposed to the notion of 'packing' voters."

Redistricting is a process that legislative bodies are by law required to undergo every 10 years in response to the results of the decennial census. It is perhaps the most tedious and contentious high-stakes initiative under way in the Legislature right now. The highly-technical process is vulnerable to political influence and maps can be redrawn to make districts friendlier to one party or voter group.

This isn’t the first time Democrats have clashed with each other over redistricting. 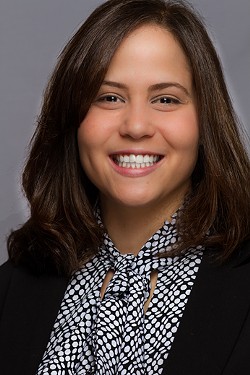 During the same process that spanned 1991 and 1992, Democratic legislators were split between proposals from Legislature President Kevin Murray and fellow Democratic Legislator Ron Thomas. Murray’s plan would have created 10 districts that blended parts of the city with neighboring suburbs. Thomas wanted fewer blended districts and the creation of several majority-Black districts in the city.

Following negotiations, votes, and a lawsuit, Thomas prevailed. The map drawn that year is still largely in effect, though there were tweaks following the 2000 and 2010 censuses.

The 1991-1992 redistricting fight aggravated an existing intraparty rift between a group of Black Democrats loyal to the late Assemblymember David Gantt and a group of east side and suburban Democrats, who were largely white. That long-running conflict persists and underlies the current disagreement over the maps.

Dave Garretson, who is a past chair of the Monroe County Democratic Committee and who has closely followed the redistricting process, said the proposed map addresses several concerns. In particular, he said, it includes fair, competitive districts in the suburbs and provides for good minority representation in the city.

“The main thing I think that people will see if they're looking at this map, if they're Democrats and insiders — it depends on how you feel about Sabrina LaMar and her colleagues,” Garretson said. “This map does make it possible for them to take one or two districts that they may not have been able to take in another way."