Delay ball! A round-up of the best baseball films 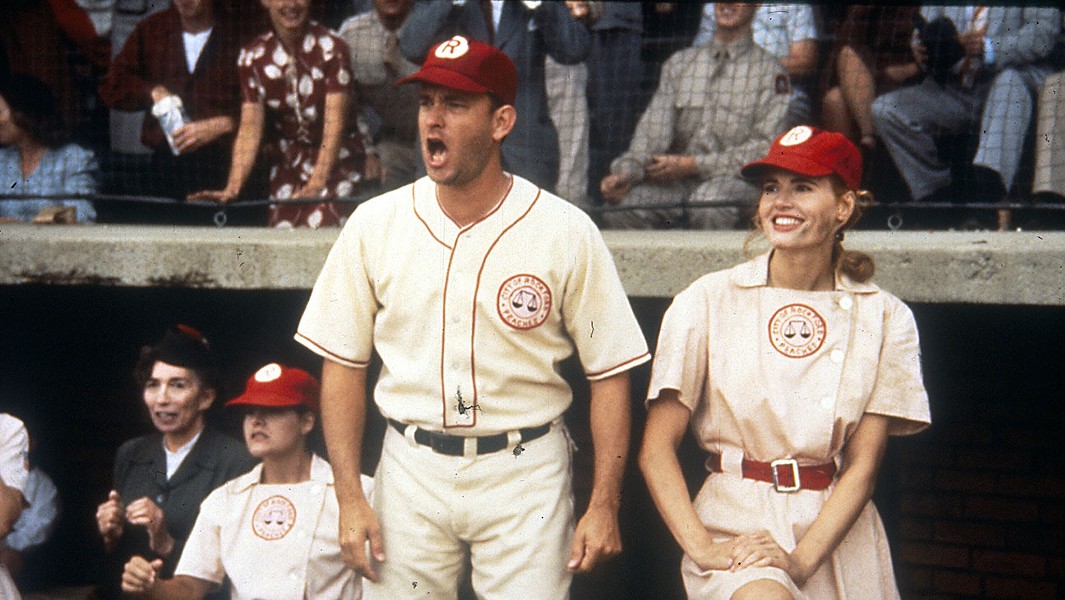 PHOTO COURTESY COLUMBIA PICTURES Tom Hanks and Geena Davis in "A League of Their Own."
Thursday, April 9, would have been Opening Day for the Rochester Red Wings, but sadly the start of the season has been postponed (like most events these days) due to the COVID-19 pandemic. With no new date yet announced, it seems that local baseball fans may not be headed to the ballpark for some time.

Luckily, we’ve still got baseball movies, which at their best can be just as thrilling, inspiring, emotional, and filled with all the drama of a real game. With that in mind, I've compiled a list of some of the best films about baseball currently available to stream. And hey, if you want to make it as authentic an experience as possible, why not order up your favorite variation of the Rochester plate and a few cans of Rohrbach’s Red Wing Ale for curbside pick-up? It’s the next best thing to fill the void until our hometown team can once again return.


“42” (2013)
A pre-”Black Panther” Chadwick Boseman stars in the stirring, true story of the legendary Jackie Robinson, the first player to break the color barrier in Major League Baseball when he was signed to the Brooklyn Dodgers in 1947. Boseman is fantastic and, even when the movie paints in broad strokes, it’s impossible not to be moved by Robinson’s story.

“Everybody Wants Some!!” (2016)
Sure, it’s not the most packed-with-sports-action out of the films on this list. But Richard Linklater’s charming hangout movie, about the members of a college baseball team bonding while living together in the months leading up to their season, gets at something honest and genuinely sweet about the camaraderie that comes from playing on a team.

“Field of Dreams” (1989)
Struggling Iowa farmer Ray Kinsella risks his financial livelihood to build a baseball field after hearing a whispered voice in his corn field tell him, "If you build it, he will come." A sentimental and admirably earnest tribute to America’s pastime.

“A League of Their Own” (1992)
Penny Marshall’s fictionalized account of the formation of the first all-female professional baseball league during World War II is a beloved entry in the baseball movie canon for good reason. Funny, emotional, and blessed with an impeccable cast, including Geena Davis, Tom Hanks, Lori Petty, Rosie O’Donnell, and Madonna. Pure joy.

“Major League” (1989)
The new owner of the Cleveland Indians — who has inherited the team from her recently deceased husband — purposely puts together a horrible roster in order to tank the team and give her an excuse to move it to Miami. Of course, against all odds the loveable losers start to win. An eminently quotable sports comedy classic.

“The Natural” (1984)
Robert Redford stars as Roy Hobbs, an unknown player with a mysterious past who joins the struggling New York Knights ball club as a 35-year-old rookie. With seemingly superhuman talent, he dreams of becoming the greatest player who ever lived. While it’s more than a bit hokey, this film is loaded with moments that have since become iconic. Plus, many of its baseball scenes were filmed in Buffalo!

“Pride of the Yankees” (1942)
This famed drama pays tribute to the life and career of New York Yankees first baseman Lou Gehrig (played by Gary Cooper) and his battle with amyotrophic lateral sclerosis (ALS), the disease eventually named after him.

“Rookie of the Year” (1993)
This childhood fantasy is about a wannabe little-leaguer who develops astonishing pitching abilities after accidentally breaking his arm, and finds himself recruited to be a major league pitcher for the Chicago Cubs. One of my favorites as a kid, it’s definitely silly and a little cheesy, but director Daniel Stern allows a genuine affection for the game to shine through.

“The Sandlot” (1993)
“You’re killin’ me, Smalls!” During the summer of 1962, shy new kid in town Scottie Smalls gets a crash-course in friendship when he’s inducted into the world of baseball through the scrappy neighborhood pickup baseball team. Nostalgia, heart, and fantastic casting of the ensemble of young actors made this an instant classic.

“Sugar” (2008)
This indie drama from directing duo Anna Boden and Ryan Fleck (“Captain Marvel”) tells the story of Miguel “Sugar” Santos (Algenis Perez Soto) a ballplayer from the Dominican Republic who’s recruited to the U.S. minor leagues, hoping to make it to the majors. It’s a touching character study, effective both as a sports film and a story about the life of an immigrant in America.

Bonus recommendation: If you’re hankering for the commitment of a true binge watch, legendary documentarian Ken Burns’ 18-and-a-half-hour “Baseball” (1994) offers a fascinating and thorough history of the game.


Adam Lubitow is a freelance writer for CITY. Feedback on this article can be directed to becca@rochester-citynews.com.