Never let a soul, including your own, tell you it's too late to achieve a goal. At 84 years old, Rochester-based retired educator and writer Lynn Rosen has published her first novel, "A Man of Genius," which tackles the concept of corrupt but respected figures, and how we handle our own problematic heroes.

Though billed as a "gothic romance," Rosen says "A Man of Genius" is really a moral story with gothic elements. The fictional story of a renowned architect, Samuel Grafton-Hall, is pieced together by a biased and unreliable narrator, Arthur Dolinger, a retired lawyer who says he "took pride in the belief" that he was a friend of the misanthropic Grafton-Hall. 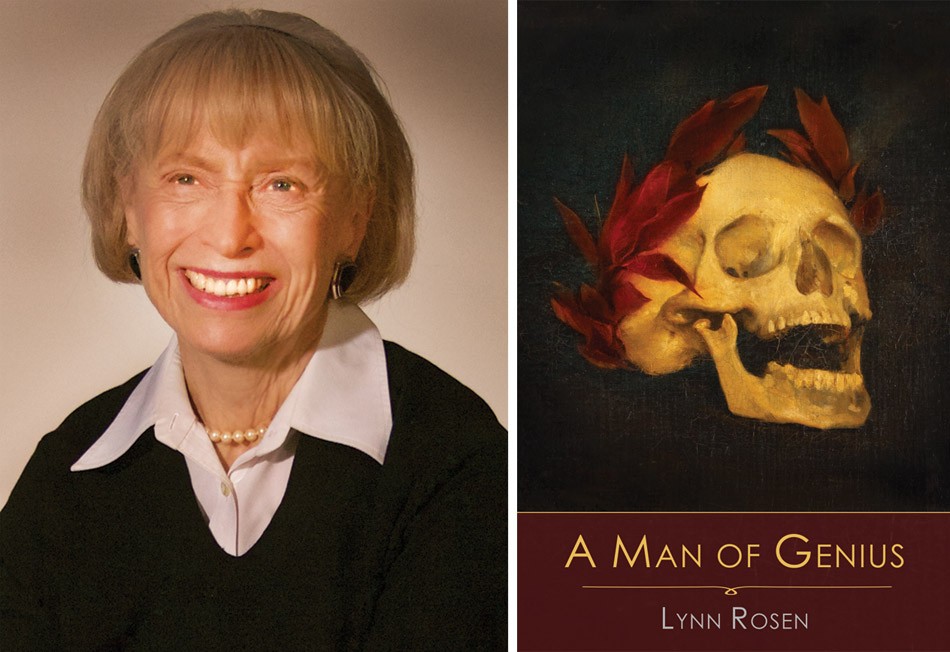 A chance meeting with his former colleague, Carlyle Richards, sets Dolinger on a mission to make sense of how Grafton-Hall's transgressions continue to hold sway over other lives even after his death. Rosen guides her readers through a slow-reveal of the compelling story as Dolinger discovers more about Grafton-Hall and fills in the blanks where answers do not surface.

"My argument is that all narrators are unreliable," Rosen says, "but they don't show their bias as openly as Dolinger does."

A central conflict of the book is the struggle in how to think — and what to do — about a person who offers the world much, but acts unethically. Some of Grafton-Hall's more serious offenses spiral out into a triple homicide, a decades-long cover-up, and sympathetic characters who are manipulated by the man from beyond his grave.

The inspiration for the story originated in an experience Rosen had as an undergrad. She convinced some fellow students to drive her to see Frank Lloyd Wright's "Taliesin" house and studio in Wisconsin by spinning a tale that there were some attractive and lonely architect fellows working there.

Despite the house being closed to tours on the day the group arrived, Rosen was invited in for tea by Wright's third wife, the caretaker of the estate.

"The conversation was very stilted on my end, because there was a question that was on the tip of my tongue. I knew if it got out, I'd be out of there in two seconds," Rosen says. "What I wanted to ask her was if her husband really killed his mistress."

There are similarities between the violent murder of Wright's mistress Mamah Borthwick and five others, for which a servant was accused, and the events in "A Man of Genius."

Though Rosen held her tongue at Taliesin, the seed of a compelling story was born.

"The thematic, binding things about this is idolatry, and what we owe to genius," Rosen says. "And as we look at the people in media, the people that we select as our authority figures...what are the criteria that we apply to them? And what does it say about us, and our own systems of moral obligation, that we make these selections, and we lead our lives looking up to these figures, even forgiving them for unforgivable things?"

"A Man of Genius" includes the secondhand stories of three vastly different women caught in Grafton-Hall's web. His first wife, Catherine, was swooped up by the already successful Grafton-Hall immediately after she graduated in the 1920's, when women had little hope of achieving success in the professional realm. She accepts a tenuous agreement to use him as her lifeline to practicing architecture.

"Even today there are fewer women architects than men," Rosen says. Her own life informs Catherine's plight — she worked in public relations before it was a common occupation for women, and was the first woman to serve as an academic dean in Ohio. "I was a professional all my life," she says. "I know what Catherine went through."

Though Catherine and Samuel are arguably a partnership — she secretly refines his designs, and he lets her alterations stand — he does not share the glory. Over time, Grafton-Hall scorns her, disgusted by his own dependency on her, and dismisses her protests with effective spells of gaslighting.

Just as Catherine begins to pace her cage, she discovers his liaison with the petulant but savvy Daphne, who proves to be his manipulative equal. She too has been placed in a box — secreted away from scandal, as his affair with her began when she was a teen — but has no intention of remaining in her confines.

The story sees Grafton-Hall's third woman, his second wife Elizabeth, who is loyal and forthright about her desires, faced with a morally loaded decision after his death. Elizabeth and Carlyle, who is charged with executing Grafton-Hall's will, are the keys to the story's moral ambiguity, each similarly embodying Rosen's interest in the untidy decisions life presents to us.

"I wanted the reader to walk away thinking, 'What would I have done?'" she says.