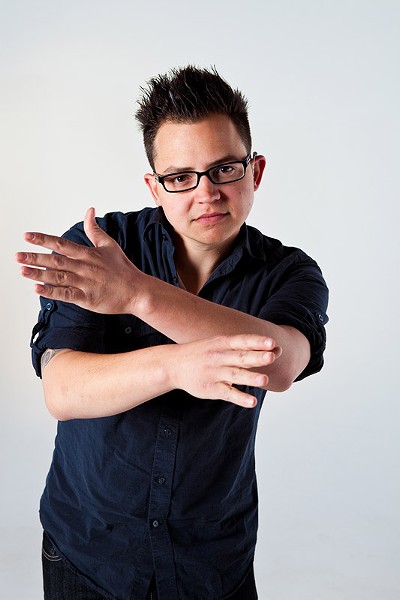 Sean Forbes is a rapper. A good one, too. But that, in and of itself, isn't all that extraordinary. That is until you consider the fact that this young artist can't hear what he's doing. Sean Forbes is deaf. It's a perplexing dichotomy that precedes him: a deaf rapper.

Forbes got online to field a few questions. An edited copy of that conversation follows.

Sean Forbes: My wife and I just became parents in June to a beautiful little girl. Besides becoming a dad, I just finished recording my sophomore album, and my nonprofit organization D-PAN, The Deaf Professional Arts Network, just finished another amazing American Sign Language music video that is going to be released very soon. D-PAN is also doing some new stuff outside of music that we're going to debut in the beginning of 2016.

Why did you choose hip-hop?

I like to think that hip-hop chose me. I grew up on rock and country, but when I felt hip-hop for the first time it resonated with me. I love drums, and I love lyrics so the two are really the forefront of hip-hop; add in a few spices and you've got me.

What do you write about lyrically?

I want to use my music to share a message of overcoming adversity and doing what you want to do. I hate songs about rims, girls, and money; those things don't resonate with me. When I was working on my first album there were a few songs that were just purely positive motivation, then I have a song like "Def Deaf Girls." Yes it's about girls, but if you really read the lyrics it's about liking strong women, especially ones that are deaf. A lot of artists today aren't necessarily role models, it's not something that "sells." But I never wanted to follow the trend and I continue that on my next album.

Have you been deaf since birth?

I have been deaf for as long as I can remember. I lost my hearing at one.

How do you hear or feel music?

I feel music. I feel it both physically and emotionally ... I like to think that I'm programmed with it. It's just a part of my DNA.

Are people who see you for the first time surprised you're deaf?

I get that question a lot: "You're deaf and you do music?" To me, deafness is an identity. If I wasn't deaf I wouldn't have gone to RIT/NTID; I wouldn't have met all the people that I've met; I wouldn't have travelled the world inspiring thousands of people to chase their dreams just like I did ... I love being deaf.

What's something you can do musically that a hearing performer can't?

This might sound strange, but when I'm performing, I know the songs, I know where I'm going with the signing and rapping, so it's almost like a muscle reflex that is natural. I sometimes watch people's conversations while I'm performing, and they'll be asking themselves, "Is he married? I wonder how deaf he is." Then when the song is done, I point them out and answer their questions. I love to shock people and let them know that I am tuned in.

Are there other hearing impaired artists who have inspired you?

Chuck Baird is an inspiration. When I came onto the "Deaf Scene" I often felt like a misfit because people were like "Who is this guy? Where did he come from? He's doing music for the deaf?" It was Chuck, a famous deaf painter who passed away a few years ago, that came up to me and started talking about jazz musicians and how they weren't accepted, and making a comparison without making a comparison. He made me feel welcome. I have one of his artworks on the wall right outside my studio, so I see it every time before I go to work on a new song.

What inspires you the most?

Young kids that think they don't have a future, then I hang out with them and tell them my story, ask them what they want to do, and I ask them, "What's stopping you," and they never have an answer. I always encourage them. Giving up is the easiest thing to do, but working hard for what you want is the most rewarding.

I like to fly by the seat of my pants. I like to think I've done pretty well for myself taking that approach. It's not ethical and it wouldn't work for everyone, but things have happened for me organically and I'm going to continue that. So I'll ask you: what's next?