Davina and The Vagabonds 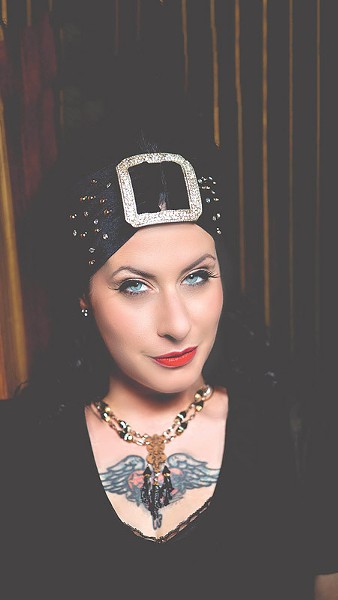 Proving that rock 'n' roll can still thoroughly thrive without the guitar, Davina and The Vagabonds lay it down with a vintage instrumentation — piano, horns, bass, and drums —and hi-tone retro ambition. It boogies and woogies as if spilling out of Preservation Hall, or more like the parlor music heard in New Orleans brothels of yore.

At the front of the band, parked behind the piano, is Davina Sowers, a songstress that comes across like a mix of Rosie the Riveter and a pin-up queen painted on a B-29. But Sowers' likeness doesn't adorn nose cones, nor is she building them for the war effort; she's knocking 'em dead night after night, town after town with her band's jazzy jump and swing.

What really knocks folks out, however, is the vocal voodoo in Sowers' powerful and animated singing, specifically her phrasing. She plays around with a syncopated delay as if the words were batter on a spoon. And you can taste the songs over the band's bop. Bring a date, and don't forget the napkins.

City woke Sowers up — it had been a late night grinding it out at the piano — to shoot a few silly questions her way. An edited transcript of that conversation follows.

City: When did it all start?

Davina Sowers: My goodness, how do I condense 12 years? I moved to Minneapolis 12 years ago. We started playing once a week at this hole in the wall, and now, I don't know how, but we're working 250 days out of the year.

So you're on the road a lot.

How do you keep it fresh?

I think the people do, I really do. Traveling and meeting new people makes it a new experience wherever we go. Keeping a new repertoire of new songs helps, too.

How did you get hooked on vintage music?

I grew up listening to older music. My mother was a folk singer. I was raised on early 20th century, pre-war jazz, blues ... traditional music. I don't know; it just comes out of me. It's a love of mine, but we have some pop songs — not pop necessarily, but more mainstream. Still there's a retro edge to them.

That's probably due in part to the instrumentation.

Yeah, the piano. And there is no guitar.

What's a typical show for you?

I don't know if there's anything typical about this crazy lady you're talking to.

Have you ever considered coming out from behind the piano and just singing?

I have. But I don't know what to do with my hands.

Music-wise, I don't think I could be a heavy metal rap star. But seriously, I'll never phone it in.