Rochester Latino Theatre Company's "W.A.C. Iraq" takes a complicated subject and presents it in a simple, powerful way. This tribute to Latina women in the Armed Forces who have served in Iraq honors their contributions, details their sacrifices, and asks some disturbing questions about a country that gives poor women opportunities in the military and often takes them away when they return from service. The format is a dialogue between a distraught G.I. (Jay O'Leary) and a kindly operator in a military base call center (Denise Herrera), interrupted by a monologue from a proudly patriotic young Latina soldier (Wednesday Mann), and concluded with a powerful, paradoxical monologue accompanying pictures of Latina soldiers in Iraq. It may not sound like much on paper, but it is affecting and effectively performed, particularly by O'Leary.

If any woman's life could fill up a solo show, it is surely that of Sarah Bernhardt, the great dramatic actress of the late 19th and early 20th centuries. The reigning theatrical diva in an age that boasted plenty of them -- and one of those fabulous self-invented Frenchwomen like Colette and Chanel -- Bernhardt knew adventure, scandal, and glamor. You get a vague sense of all that fabulousness in "Bernhardt on Broadway," playing at MuCCC and written (book, music, and lyrics) and performed by the industrious Carol Dunitz, but alas, it adds up to a shapeless and only occasionally diverting show.

The title suggests that Bernhardt (who I don't think ever appeared on Broadway) was a sort of Belle Époque Ethel Merman, and in Dunitz's play the Divine Sarah seems more like a music hall star than a great tragedienne, going from name-dropping Victor Hugo and Cornelius Vanderbilt to singing jaunty ditties, blowing kisses to the audience, and lifting her skirts to show a bit of leg. (These songs include a Piaf-like setting of Bernhardt's great set piece, a speech from Racine's "Phedre," which I can only describe as a camp classic.) Dunitz's French accent ranges from piquant to impenetrable, but she has an appealing enough personality and her singing does have a bit of Gallic tang. And she navigates the whole affair with great confidence. 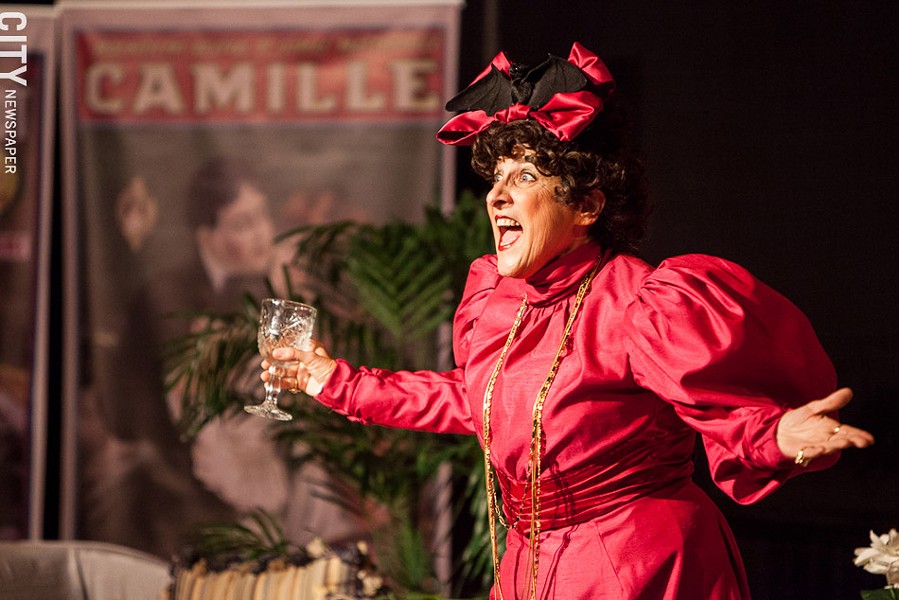