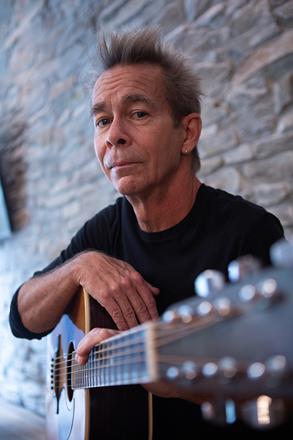 Guitarist Tim Reynolds played CMAC in Canandaigua a month ago with the musician that helped him become a household name and solidify his reputation as a virtuosic talent — Dave Matthews. On Aug. 13, Reynolds returns to Canandaigua when he headlines the Lincoln Hill Farms BrewFest 2022 with an acoustic set, this time as a solo artist.

Most fans of Dave Matthews Band were introduced to Reynolds on the duo’s engaging double album “Live at Luther College” in 1999. But by then, the speedy player with technical precision and stylistic versatility for days had already established himself as the leader of the funk-rock-jazz fusion band TR3 and as a soloist.

With two Grammy nominations, more than 20 albums released under his own moniker, and studio and live records as Dave Matthews’s lead guitarist, Reynolds shows no signs of slowing down. Following the solo stop at Lincoln Hill Farms and subsequent shows around the country with DMB, Reynolds and the rest of TR3 — bassist Mick Vaughn and drummer Dan Martier — head to the Charlottesville studio Haunted Hollow in October to record the trio’s first acoustic-based album.

Reynolds and CITY recently carved out an hour to chat about his biggest influences, his sensibility as a soloist, and achieving widespread popularity in a supporting role to Dave Matthews. An edited transcript of the conversation follows.


CITY: Your sound as an acoustic guitarist is reminiscent of classical guitar music, ’80s heavy metal, new wave, and jazz, while belonging to none of those genres. Is there a particular stylistic influence, or the influence of a particular musician, that finds its way into your music regardless of what you’re playing?

Tim Reynolds: I could say with total confidence that it’s been a very schizophrenic, or even — what do they call it — bipolar guitar approach. But I just really like a lot of styles. Over the years to list them, it sounds kind of crazy, but I was interested in more or less one at a time, so it seemed like a bunch of stuff. Especially when you’re young, something makes a big impression on you, and you want to make a deep dive. I remember Allan Holdsworth — what the fuck — what a great guitarist. I remember getting a book that had a lot of transcriptions of his solos, yes, but his chordal thing was way more advanced than most people are.

When I was young, there was a solo jazz guitarist named Joe Pass. I went and saw him. And then when I got more into solo acoustic, this other guy, years later, from Tuck & Patti — Tuck Andress — he kind of had a Joe Pass approach, but was very funky. He did Stevie Wonder covers, and he made his big, giant jazz guitar. He had some kind of special rig that was almost acoustic. So I remember when I started really wanting to be more of an acoustic soloist as a thing. I remember thinking of that guy.


You played CMAC in Canandaigua recently and played at Anthology with your trio in January. Is there something particular about audiences in the area that keeps you coming back to the Rochester-Finger Lakes region?

Originally, my booking agent, who’s passed away since, he was smart in that he would kind of, “Ok, if you and Dave played here, let’s book a solo gig a month or two after, so they remember that you came.” That kind of thinking. So partially, going up to New York is just practical for those reasons. But also, just ’cause I've always loved playing New York because people really dig the music. I don’t know, it’s hard to explain. Of all the states I play, that might be the one I play the most, it seems like. Like I say, there’s just a lot of good places to play. You know what I mean? It’s fertile ground for little places, which is my shit.

It’s been almost 30 years since you released the album “Stream.” Is there one thing about the way you compose and play acoustic music now that would have surprised you back then?

Maybe just more learning how to play independent parts better. And that’s just song by song, over the years. Some songs developed, like a baseline and a melody that kind of had to be fit together in a certain way. Whereas then, most of that stuff just came about really not off-the-cuff, but really kind of spontaneous writing. You know what I mean? Like “Stream,” I just wrote that whole thing in the kitchen. I mean, there's a whole section that’s improv. But you know, it's obvious the beginning and the end is that lick.

So yeah, a lot of the songs in that period, as it were, are simpler in a way and I guess I wrote more complex things, you know, and kind of challenged myself as I got deeper into it. Because at that point, when I recorded “Stream,” I was only a couple years into playing solo like that, really. I mean, obviously, I’ve played guitar for a long time. So I brought some of that to that, but you know, I still am kind of learning how to play solo. But I'm also really excited to play these tunes with Dan and Mick — this kind of makes me the happiest of anything right now.


If you could boil down your essence as an acoustic musician to just one of your songs, which would it be?

There’s one that’s much newer, but to me it’s very quintessential. It’s the first song on “That Way” (released in 2017) called “Tangled Web We Weave.”

And what about that song feels like it’s particularly true to you?

I guess it’s because the way it uses the guitar as a solo instrument. There’s a melody played against the drone at the beginning. And then there’s some bass lines, and some melody and bass together, and that’s quintessentially what I do.

Is there a Dave Matthews song that feels so natural to you, you feel as if you could have written it? Is there a song by Dave that draws you most out of your comfort zone when you perform it, because it’s the least like something you would gravitate toward as a composer?

I can’t really think of any songs that I would have written in DMB, ’cause I guess I’ve just been around it so long. He’s got a lot of different kinds of songs. I like the ones that take me out of my comfort zone. You have to think about it more, and some of those actually, because I had to think about it, they’re simpler to play. ‘Cause that’s all you have to think about, is the part that you were uncomfortable with, but now you know it.

I think it’s just appreciation of how certain chords feel, like (on the song) “#41.” I don’t know if I could have written that song, but the way it starts, it’s just the simple chords. So it’s in the key of E minor, it starts with A minor. That’s the sweetest chord of all.

You’ve enjoyed sustained success and longevity as a solo musician and as a band leader, but you’re best known as Dave Matthews’s guitarist. Has your attitude toward that fact evolved over the years? If so, how?

It’s definitely evolved over the years. You just kind of settle into it after all the years. At first, when I was doing my thing almost all the time, it took a while to get used to that being your thing all the time. You know what I mean? I used to do my thing all the time and it was cool, and there’s a satisfaction in that. And I realize now after all these years, I really love Dave, and I really do love his music. When you’re younger, you don’t see how the longevity of that is a blessing. You’re just trying to go through whatever you do.

Over the years, I guess I get more settled into it, you know what I mean? And also, just being lucky being able to make a living comfortably. And even though it used to be all I ever did was my thing, I still get to do it, and I still get to have a nice house in Florida. And so you learn to appreciate things for different levels. Also, knowing if all I ever did was just my thing, I’d have to work a lot more — like literally all the time, pretty much.

Was there ever a time when you felt resentment about the popularity of Dave Matthews Band, as opposed to your solo stuff?

I’ve always been OK with that. But, you know, when you’re younger, you get a flash of that in your mind. But then you realize, well, it’s not a healthy place to let my mind sit, ‘cause it’s just not right. But on a human level, you know, you just have to accept reality, really. And it comes at different levels at different ages. In your 20s, you have less of a long-term view because you haven’t had a long view to know. And then in your 40s, it’s a little longer, then your 50s it’s longer, and in your 60s it’s longer…Then you realize, well, when I’m 74, ten years from now, I’ll have more long-view information to not be upset about, or to be upset about. But usually, the older you get, the less you give a fuck about anything. And it’s just kind of zen.

What am I trying to say? Just not to worry about things, basically. ’Cause that’s the thing that drives everybody crazy: worrying about shit in their head. The older you get, there’s more you could worry about, ‘cause you know of more things, but more things happen. But the wisest thing is to let go of everything you can, you know, and not fret about things as much. Which in this day and age, is almost impossible. That’s why the drink keeps coming.

For more on Lincoln Hill Farms BrewFest 2022, including ticket info, go to lincolnhillfarms.com/brewfest.


Daniel J. Kushner is CITY's arts editor. He can be reached at dkushner@rochester-citynews.com.