PHOTO BY ELISE HUGHEY Writer and artist Dave Chisholm began work on "Canopus" in 2018 as a way of addressing his personal struggle with resentment through a sci-fi lens.

davechisholmmusic.com
For an artist who has never been interested in creating autobiographical comic books, Rochester graphic novelist and musician Dave Chisholm toes that line — tracking the dust of his personal history as he relies on the strength of fantastical storytelling.
His first book, 2017’s “Instrumental,” followed the story of Tom, a struggling jazz musician who, having become disillusioned with his stagnant career and his seeming inability to reach an audience, is gifted a powerful trumpet that can simultaneously make captivating music and cause apocalyptic destruction. 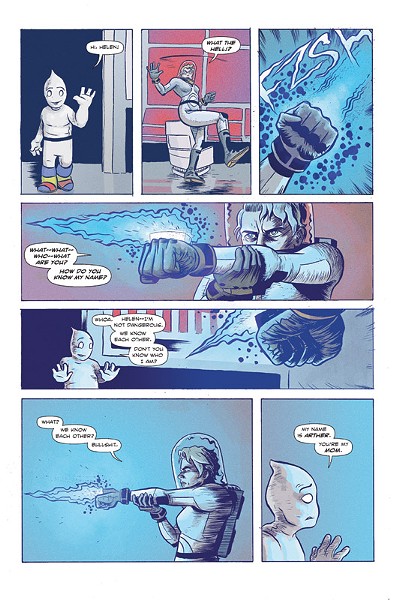 His sophomore effort — the first chapter of which is available now from Scout Comics — is the four-part book “Canopus.” The serialized sci-fi adventure begins with scientist Dr. Helen Sterling crash-landing on an enigmatic and lifeless planet that orbits the star Canopus, 309.8 light years away from Earth. Suffering from amnesia, and accompanied only by a robot-like creature named Arther who refers to her as “Mom,” Helen tries to remember how and why she got there, and fix her ship in order return to Earth and save it from a fiery doom.

“This was me trying to understand myself: How do I escape this cycle in my head of hanging onto this poison of resentment?” Chisholm says. “So it’s hard to say, 'cause the word forgiveness comes up, but it’s not quite that. It’s not quite forgiveness. But it’s more like letting go of that anger and poison that you carry around.”

Chisholm first got the inspiration for the new comic book while on a flight to Boston on February 28, 2018. For the next five months, he was fixated on the idea. Given the “lost in space” premise, he had questions about the essence of personal identity and memory. How do our memories make us who we are? And how do we break free from resentment?

As Helen explores the planet in search of the materials needed to fix her ship, she finds items that trigger flashbacks of painful and cathartic moments in which she felt let down by others. Chisholm uses a meticulous approach to visual storytelling, arranging the comic’s panels in such a way that they articulate the psychological realities of the characters.

“It’s all about having a sense of normal that you can then disrupt,” he says, “and using the comic’s language, and restricting yourself for most of the story so that when you take away those restrictions, you do it at key story points.” Chisholm also uses a surrealistic style that recalls the screenplays of Charlie Kaufman, in which the psychological issues that characters experience are often manifested physically in the tactile world.

The subsequent three chapters of “Canopus” will be released monthly, beginning in March. Chisholm also has another big project, yet to be announced, to be published later this year. While the details of this new story have yet to be shared publicly, you can trust that the author will confront his own truth in the work.

“I have to be true to myself on two fronts,” Chisholm says. “One, I have to make books that are authentic to shit I’m confronting in my life. But on the other hand, I wanna make books that I would read.”