Rochester artist Dave Chisholm first combined his skills as an illustrator and a jazz musician in “Instrumental,” a 2017 graphic novel in which a frustrated trumpeter named Tom encounters a strange trumpet that could reverse his fortunes, if it doesn’t usher in the apocalypse first. 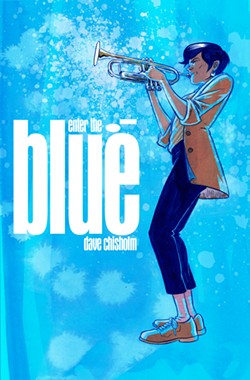 Chisholm returns to the trope of the disillusioned jazz musician in “Enter the Blue,” his latest music-meets-“Twilight Zone” graphic novel, commissioned by Blue Note Records and published by Z2 Comics (originally scheduled for  Sept. 27, the release date for "Enter the Blue" as been delayed due to unforeseen shipping circumstances). This time, the story follows Jessie Choi, an all-but-failed music school grad who reluctantly picks up her instrument again to rescue her mentor Jimmy Hightower from being trapped in an alternate plane of existence known to jazz musicians as “The Blue.”

Despite the surface similarities in the graphic novels’ plots, their protagonists are polar opposites, Chisholm said. Tom is inherently driven and selfish, whereas Jessie is considerate, self-denying even. Tom is self-important, but Jessie suffers from impostor’s syndrome and struggles with self-acceptance as a musician.

“I think I’m a bit more like Tom than Jessie,” Chisholm admitted. “I think I’m a bit more comfortable putting art out there, putting music out there. I’m pretty comfortable performing, especially on trumpet. And my frustrations as an artist — as a musician and as a visual artist — are almost always rooted in, ‘Why am I not getting enough attention?’ And that’s much more of a Tom angle.”

Music lovers and comic book fans familiar with Chisholm’s work — perhaps most notably “Chasin’ the Bird: a Charlie Parker Graphic Novel” from 2020 — will recognize the artist’s exuberant, surrealist style when depicting music being played. Notes cascade over the pages with a feverish energy, as if they’re about to leap off the music notation’s bar lines.

Chisholm draws like an artist who not only loves music, but truly believes in its transformative power — which is perfect for a story about jazz musicians who encounter a conspiracy theory about the legendary label Blue Note and its connection to Jewish mysticism and the secret path to entering “The Blue.”

“I think that learning the language of this music, the real-time improvisational language of this music, is a magical thing,” he said. “And when you do participate in that on a deep level, with other people who are participating with it on a deep level, I think that there is a kind of communion with history that happens. It’s not quite as literal as what you see in this book.”