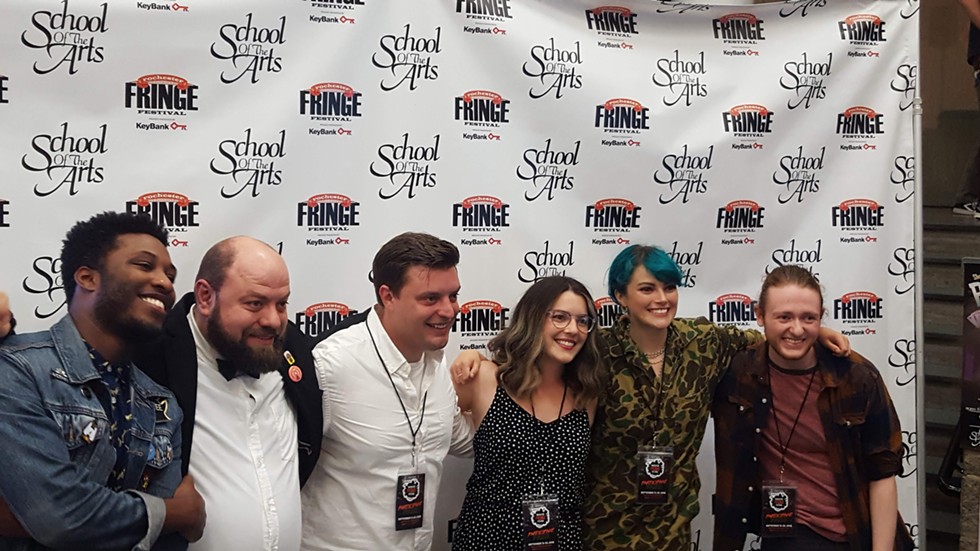 Rochester Fringe Festival is to be applauded for booking a mini-festival featuring local comedians. I’m referring, of course, to “This Year’s Models,” an eight-night series of performances curated by Rochester comic and stand-up impresario Woody Battaglia.

Saturday night featured the third such comedy lineup in the series; the snapshot it provided of the local scene was varied, and for the most part, deeply humorous. The hour-long showcase began with the musical duo Saunt Yübear. Sisters Madeline Hubert and Gracie Walsh performed satirical songs with dead-eyed confidence and subtle, folk-y treatments of situational comedy.

Yübear was at its best when detailing the inevitable awkwardness of human interaction — from the tortured monotony and soul-draining small talk of working at an office, to the moment when you realize an old acquaintance is contacting you online merely to sell you Mary Kay products.

Battaglia, ever the affable host, worked in a sketch based on his real-life experience of being suspected as a bank robber, only to reveal an embarrassing secret to police. The first featured comedian of the night was newcomer Kain McCall, an RIT student who also happens to be studying astrophysics. McCall’s routine felt like listening to your roommate amusingly regale you with his thoughts from earlier that day. He successfully made banal, everyday happenings thoroughly entertaining with his quirky sensibility.

Billed as “Rochester’s #1 comedy bad boy,” seasoned stand-up Kyle Baker came onstage wearing sunglasses, and quickly launched into an exceedingly crude but funny joke. It’s unclear whether Baker correctly assessed the reaction in the room or he simply got self-conscious, but the audience’s reaction was mixed — as if some of those present were afraid to laugh — and Baker backed off from the initial schtick. His most successful bit was his skewering of a local event called “Plateapalooza.”

As a whole, the evening was well-paced, and a lighthearted, upbeat vibe was prevalent. What was a strong showing of comedy became an unmitigated success with headliner Malcolm Whitfield’s set. This fact became evident almost immediately, with this opening icebreaker about being black: “I’ve been called ‘approachable’ by a lot of white people.”

Whitfield is undeniably charming — with a smile that seems miles long — and while his winning personality went far, his material was unequivocally strong. A great example was when the comedian explained his anti-National Anthem stance (“What, you just listen to 200-year-old music?...Damn, is that Bach?”). Another gem was Whitfield’s self-effacing quip, “Everything about me says ‘out-of-work Old Navy mannequin.’ ” Admirably, the comedian also incorporated crowd work into his set, something no other performer on the bill attempted.

Whitfield had long won the crowd over, but it was his joke about being racist toward birds that was so clever, I’m tempted to call it genius. The stand-up achieved that rare balance of laugh-out-loud absurdism and hard-hitting social commentary, and the joke killed. “It’s not like I see a seagull, and I’m like, ‘String ‘em up!’ ” Whitfield said. “I’m like a more subtle, midwestern housewife — I just don’t like them to be near me.” I’ve never heard a funnier, more devastating take on the lingering prevalence of racism in our time.

“This Year’s Models” continues for five more shows (featuring different comedians each night) at School of the Arts: Club SOTA on Sunday, September 16, as well as Wednesday, September 19, through Saturday, September 22, at 7:30 p.m. $10. Appropriate for ages 18 and older.