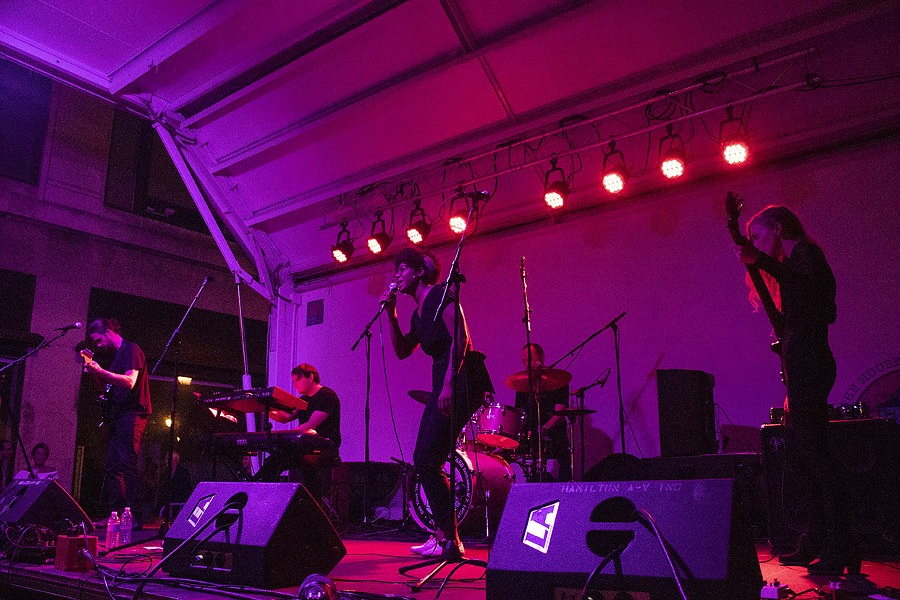 Gold Koa performed its first-ever concert on the Gibbs Street Stage on Friday, and the band’s existence seemed especially natural, logical — even inevitable.

Frontwoman Cammy Enaharo — best known to Rochester audiences as a solo, indie folk artist — sounded as if she were born to front an R&B-pop outfit. Her voice was brimming with sultry confidence. Matt Battle and Kamara Robideau held down the rhythm section as only they can. Battle’s drumming hinged on precision, but his danceable, mid-tempo beats had a kind of cool and loose amble to them, accentuating the chill vibes of the music. Robideau’s bass playing was sure and steady.

The trio of musicians were joined by keyboardist Andrew Links and guitarist Chris Potter — Battle and Robideau’s bandmates from Oh Manitou. That band’s high-octane indie rock was replaced here with infectious pop that frequently flowed into what sounded like atmospheric, after-hours slow jams.

Gold Koa was impressively polished for its first live go-around. It will be interesting to track the band’s progress as it attempts to further develop its sound while its members live in different cities (Rochester and Los Angeles). I’m sure we haven’t heard the last of this talented bunch.


Later that night at the Multi-Use Cultural Community Center (MuCCC), another group performed a very different kind of show. Actually, to call what The Velvet Noose does a “concert,” or even a “performance,” is not entirely accurate.

This Fringe appearance was more like a “happening.” Amid electronic drone music and a smoky haze, a masked figure, wearing a crimson red cloak and a fur collar, traipsed around the stage and brandished two bundles of sticks. Meanwhile a veiled person in a dress circled menacingly before retreating to play a gong further upstage.

Eventually, a woman entered wearing a pelt on her head and, opening a leather-bound book, began to loudly recite cryptic poetry, as if yelling into the void. “Grant me passage to the self,” she cried, “for I want of care.”

The Velvet Noose is the performance of personal catharsis. In this space populated by shadowy characters practically seething with intensity, innermost feelings and internal struggles are made manifest in a continuous series of bizarre, externalized rituals.

Even after having experienced The Velvet Noose on at least four separate occasions, it’s difficult to determine what I’ve actually witnessed, and to what end. Perhaps because of the ceremonial quality of the proceedings, certain elements recur without any noticeable changes from one performance to the next. The spoken word, for example, has gone largely unaltered, which can make the experience feel somewhat stale.

That said, there is always the feeling that anything could happen at Velvet Noose performance, and the possibility of the unexpected spectacle is enough to keep things feeling fresh. I don’t really know what I’m looking for in The Velvet Noose. I just know that what the performance art collective does is necessary and important. Experimental performance is always readily felt, but not always easily articulated.