Daniel Prude was suffocated by Rochester police, his family says

PHOTO BY MAX SCHULTE Daniel Prude's brother, Joe Prude, outside City Hall on Wednesday, Sept. 2, 2020, to announce plans to sue the city over Prude's death.
When Rochester police officers came upon Daniel Prude in the middle of Jefferson Avenue in the early morning hours of March 23, he was naked and in distress. The temperature hovered around freezing.

He had allegedly just gone on a destructive tear, according to police reports, smashing out the windows of several storefronts, and ranting about having the coronavirus. A passing tow truck driver who called 911 described Prude as being covered in blood.

Police body-camera footage shows officers who responded confronted Prude near Dr. Samuel McCree Way with Tasers drawn and ordered him to lay down on the road, which was slick from a light snowfall. Prude complied, laying face-down on his stomach, and officers cuffed his hands behind his back.

But in time, the 5-foot-10-inch, 230-pound man grew agitated. He began yelling vulgarities and tried, unsuccessfully, to stand up. Officers ordered him several times to return to the prone position before placing a white hood over Prude’s head, known as a “spit sock,” and restraining him by holding him down by his feet and his head, and applying pressure to Prude’s back with a knee.

A week later, Prude, 41, would be dead, and an attorney representing his estate said on Wednesday that he intended to sue the city, claiming that the maneuvers police used to restrain Prude caused his death.

“You can only use deadly force in response to deadly force,” the lawyer, Elliot Shields, said. “A knee to the back is deadly force.”

An autopsy report from the Monroe County Medical Examiner’s Office listed the cause of Prude’s death as “complications of asphyxia in the setting of physical restraint due to excited delerium due to acute phencyclidine intoxication,” an indication that Prude might have been high on PCP.

In a statement Wednesday, state Attorney General Letitia James acknowledged that her office is actively investigating the incident.

Prude died at Strong Memorial Hospital on March 30, a week after his altercation with police, and two months before George Floyd’s fatal asphyxiation at the hands of police in Minneapolis sparked protests nationwide.

The incident slid under the radar until Wednesday, however, and release of its particulars by the Prude family and their lawyer, including police reports and police body-camera footage, sent shockwaves through the city and beyond.

By the early afternoon, demonstrators had converged at the Rochester Police Department headquarters on Exchange Boulevard, where a handful of activists were arrested after they attempted to enter a news conference being held by Mayor Lovely Warren that was reserved for city officials and credentialed media, although many reporters were not given access, either.

One of those activists, Stanley Martin, of Free the People Roc, an organization that evolved out of the Black Lives Matter protests this summer, had earlier in the day stood with members of Prude's family at City Hall to demand that the officers involved in Prude's arrest be fired and prosecuted.

"It is abhorrent that Rochester has no capacity to respond to mental health crises in any other way than state-sanctioned violence and coercion," Martin said.

The officer who arrested Martin said she was being charged with trespassing.

In addressing the delay for Prude's death being made public, Mayor Lovely Warren explained at her news conference that jurisdiction for investigating the case fell to the state under a 2015 governor's executive order.

That order, signed in the wake of the death of Eric Garner, mandated that deaths of civilians caused by police be investigated by the Attorney General's Office.

"I want this community to know that at no point in time did the (police) chief or I not do everything possible to make sure that this case was being handled according to the way it was outlined in Executive Order 147," Warren said, referring to the order in question.

It was not immediately clear, however, why that order precluded the mayor from speaking publicly about the incident prior to Prude's family going public. Shields, the lawyer for Prude's estate, said the Warren administration had been made aware of the incident through correspondence with his office.

Warren extended condolences to the Prude family and said she was "very disturbed" by the video of Prude's arrest.

The Monroe County District Attorney's Office issued a statement saying that it became aware of Prude's cause of death on April 16 and that District Attorney Sandra Doorley referred the matter to the state Attorney General's Office on April 21 pursuant to the executive order.

"The entire Monroe County District Attorney’s Office offers their deepest condolences to the family of Daniel Prude,” the statement read in part.


Attorney General Leticia James also issued a statement that called Prude's death "a tragedy" and offered condolences to his family.

“As with every investigation, we will follow the facts of this case and ensure a complete and thorough examination of all relevant parties," the statement read in part. "We will work tirelessly to provide the transparency and accountability that all our communities deserve.”

Police reports provided to CITY by Shields show that three officers were involved in restraining Prude. Officer Francisco Santiago held down Prude’s legs, Officer Mark Vaughn held down his head, and Officer Troy Talladay placed his knee on Prude’s back to “stabilize” him. All three officers noted in the report that as Prude calmed down, they applied less pressure to their holds.

“They got annoyed and they decided to hold him down,” Shields said.

Officers reported restraining Prude until the ambulance they had summoned arrived, and noted that Prude vomited into the spit sock shortly after paramedics showed up.

Footage of the incident shows a handcuffed Prude lying and sitting on the road rambling, often incoherently and aggressively, before officers held him down.

Officers made their move when Prude said, "Give me that gun," while sitting up and handcuffed and still hooded.

But his demeanor immediately changed when the officers moved on Prude. He began whimpering and said, "You're trying to kill me."

When officers noticed Prude had stopped breathing, they reported, they released him from their holds and unlocked his handcuffs so the paramedics could perform CPR.

Ambulance workers resuscitated Prude en route to Strong, according to police reports, but he was in critical condition and a doctor told Prude’s family that Prude had been without oxygen for an extended period of time and would likely be “brain dead.”

Prude had only been living in Rochester a short time. He had recently moved in with his brother, Joe Prude, to a house on Child Street.

When he was transported to Strong that morning, it was the second time in the span of hours that Prude had been to the hospital.

The prior evening, March 22, he had been there for a mental health evaluation after his brother noticed Prude was displaying signs of having suicidal thoughts, according to police reports. 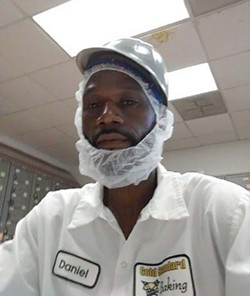 Prude was released from Strong and returned to home around 11 p.m.

But four hours later, around 3 a.m. on March 23, Joe Prude called 911 to report that his brother had left the house wearing only a white tank top and black long johns. He worried that his brother might be headed to nearby railroad tracks, according to police reports.

That was the beginning of a string of events that would ultimately lead to Prude’s death.

"When I say 'get lynched,' that was a full-fledged on-going murder, cold-blooded, none other than cold-blooded murder," Joe Prude went on. "The man is defenseless, butt-naked on the ground, he's cuffed up already. I mean, come on. How many more brothers got to die for society to understand that this needs to stop?"

Police investigators who reviewed the officers’ accounts of their confrontation with Prude on Jefferson Avenue and their body camera footage said in their report that “the officers’ actions and conduct displayed when dealing with Prude appear to be appropriate and consistent with their training.”

Chief La'Ron Singletary on Wednesday said an internal investigation that he ordered the day Prude was arrested has not been completed. It was not immediately clear if the investigators' report that found the officers to have acted appropriately stemmed from the chief's order for an internal probe.

The tactic of applying pressure to the back of a person laying face down, however, has been questioned.

The National Law Enforcement Technology Center warned in a 1995 bulletin that people lying on their stomachs have difficulty breathing when pressure is applied to their backs. It also noted that a person struggling to breathe will likely put up more resistance, prompting an officer to apply more pressure in turn.

New York City recently passed a law banning officers from various holds that restrict a person’s blood or air flow, including holds that place pressure on the back.

Police reports show that a paramedic who arrived on the scene described Prude as “actively resisting” the officers and “talking incoherently.”

“(The paramedic) stated that the observations of the subject were that he could be experiencing ‘excited delirium,’ which she described as a condition in which the subject is experiencing agitation and aggression; increased heart rate and respiration; overheating — which she stated would explain the subject being naked on a night when temperatures were around 32 degrees and mixed snow and precipitation — sweating, flushed appearance; excessive strength, a high tolerance for pain and incoherent speech,” the report read.

“Excited delirium” is a contentious term in the law enforcement and medical fields.

As a concept, it emerged in the 1980s to refer to a person, typically under the influence of drugs like cocaine and PCP. An article in the West Journal of Emergency Medicine states the syndrome is marked by “agitation, aggression, acute distress, and sudden death, often in the pre-hospital care setting.”

“Since the victims frequently die while being restrained or in the custody of law enforcement, there has been speculation over the years of police brutality being the underlying cause,” the article later reads. “However, it is important to note that the vast majority of deaths occur suddenly prior to capture, in the emergency department (ED), or unwitnessed at home.”

On Jefferson Avenue that morning, according to police reports, the paramedic told police that “excited delirium” was often associated with the use of drugs like cocaine and PCP.

As she went to retrieve medication to calm Prude, the report read, he went silent.