In 2007, Marc Ornstein made his fifth trip to Peninsula, Ohio to compete in the Midwest Championships, the flagship event on the interpretive freestyle canoeing calendar. His routine ran just shy of 4 minutes. He donned a dress shirt, black vest and black bowtie, and to the 1980s love ballad "Lady in Red," Ornstein matched music swells with dreamy movements, directing the 13-foot boat in a slow waltz across the Ohio pond. He swept the paddle in a wide motion across his body, like he was churning a giant vat of butter. The canoe pirouetted on a dime, sending ripples that disappeared within feet. Even without music, the movements would be melodic.

The 40 or so spectators clapped politely as the routine earned Ornstein second place. Four years later, it became the most influential routine of his life. 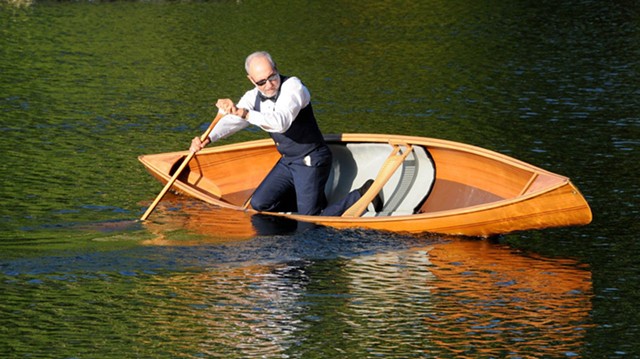 Sometime in early 2012, Ornstein was working in his expansive backyard when a friend called to say a video of him canoeing had half a million views. "I thought he was pulling my leg," Ornstein told CITY during a recent interview at his home. "Then I was like, 'Holy crap,'" he said. Footage of his "Lady in Red" set had popped up on Reddit, giving the routine new life.

Interpretive freestyle, or canoe dancing, is like competitive ice skating with a boat. Each competitor has a minutes-long routine of predetermined moves set to music and assessed by a committee of judges. Competitors wear costumes, including one notable routine performed by a young man in a Phantom of the Opera cloak. Canoe designer Charlie Wilson has described interpretive canoeing as "advanced whitewater maneuvers on Quaaludes."

Shortly after his video went viral, Orenstein was on a free flight to the Old Warner Brothers Studio in Hollywood to film an episode of the short-lived "The Jeff Probst Show." Ornstein walked Probst and a live audience through his routine. The show was soon cancelled, and the episode never aired.

Weeks later, the veteran Swedish pop band Vit Päls called, requesting Ornstein star in the music video for the song "Sov hos migg inatt (Sleep with me tonight)." Again, Ornstein thought it was a joke. Within weeks, a team of Scandinavian musicians and technician trucks descended on Ornstein's 11-acre property to film lush close-ups of his routine.

Friends began sending links to parodies of his performance throughout 2011. Ornstein respected the send up delivered by Stephen Colbert's self-titled charter in a 2011 episode of "The Colbert Report" ("He wields the paddle like Picasso wielded... a paddle"), but he said he did not care too much for Fred Armisen's impression on "Portlandia." In the second season episode "No Olympics", Armisen — dressed precisely like Ornstein down to the glasses — evoked a debonair absurdity through exaggerated canoe pantomimes. Each action, such as playing the paddle like a guitar and keyboard before toppling into the water, drew earnest country club claps from a smattering of wine-drinking spectators.

"Maybe I don't get the show, but I thought it was just silly what they did," Ornstein said. "He was just flailing around in a canoe."

When Ornstein arrived at the 2012 Midwest Championships the next summer, he encountered a video crew from National Geographic and several strangers shouting his name and wearing "Marc Ornstein" T-shirts. He realized he now had groupies.

"I don't even think it was my best routine," Ornstein said. "But over the years, a variety of things happened as a result."

Back in Rochester, few of Ornstein's acquaintances understood the sport that was bringing him minor celebrity status. "People think, 'Oh, you canoe. You get in your boat and you float down the river,'" he said. "Then they find out what the rest of it is. They think it's pretty cool. Or they think it's pretty crazy. Always one of the two."

Ornstein said he still gets calls from people who saw the "Lady in Red" routine online and want to learn about freestyle canoeing. Aspiring canoeists reach out for advice or schedule private lessons in Honeoye Falls. "It all traces back to that video," he said.

His personal pond, guarded by tall phragmites and cattails, is set back behind a long gravel driveway and two-story house he shares with his black lab, Rascal. Deer trod the acreage beyond the pond, which Ornstein elects to leave untouched. There he teaches and hones new routines when the Western New York weather permits. 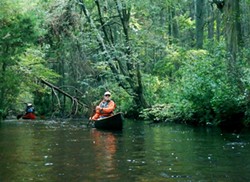 After winning four golds and four silvers, he no longer competes in the Midwest Championships, but gives exhibitions at canoe symposiums across the country.

In a basement-turned-workshop, Ornstein crafts wood-strip paddles and boats. Paddles go for $450 and canoes for a few thousand, depending on the order.

Ornstein said he rarely watches the famous routine, which now has more than 1.2 million views, but that he appreciates the moments the routine provided: wild experiences for a retired roofer to promote his passion, and hopefully, bring canoeing dancing in from the fringe.