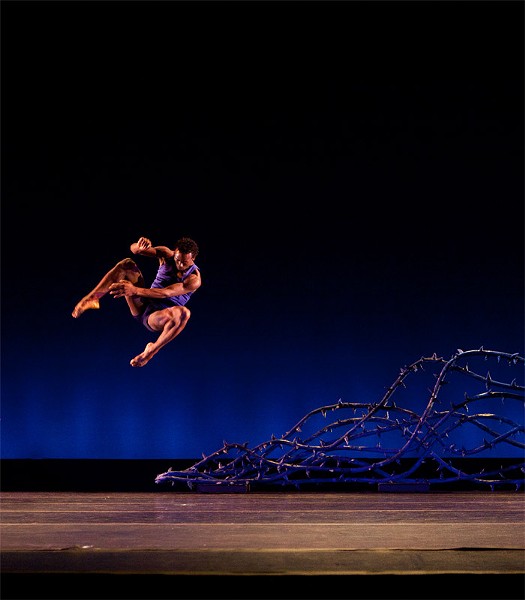 Garth Fagan Dance is home from its travels for the Rochester premiere of a new collaboration between Tony and Olivier Award-winning choreographer Garth Fagan and Grammy Award-winning jazz great Wynton Marsalis. The piece, "Lighthouse/Lightning Rod," is the second collaboration between Fagan and Marsalis; the first — "Griot New York" — was created by the duo back in 1991 and fast became a beloved staple of the Fagan repertoire.

"Lighthouse/Lightning Rod" received a healthy round of accolades from New York City dance critics during its world premiere at the Brooklyn Academy of Music in September. Time will tell whether the piece possesses the staying power of "Griot New York." Five out of the eight sections of "Griot" will be presented to Rochester audiences this week along with the entirety of Fagan's new piece.

The two works are not intended as companion pieces, however. They are, Fagan acknowledged in an interview earlier this month, separate entities, united only in that they each boast scores by Marsalis.

Rochester audiences will not have the luxury of the Wynton Marsalis Septet's live accompaniment during the local performances, but our city can lay claim to setting the scene for the blossoming of the two artists' creative partnership. It is a story Fagan has told many times. He encountered Marsalis wandering along East Avenue more than 25 years ago — the musician was distraught after a band dispute — and Fagan staged an impromptu company performance for him that marked the beginnings of their working friendship. It's a friendship that Fagan says is based on trust and shared vision.

The collaboration for "Griot New York" started with a poem Fagan had written in the voice of an African storyteller, also called a "griot." The poem served as Marsalis' peep hole into Fagan's vision; it guided his composing. With "Lighthouse/Lightning Rod," Fagan gave his friend little more than the title of the proposed piece and a few basic guidelines.

"I told him only that I needed sprightly marine-based music. Fifteen minutes of adagio for the memory section and 15 minutes of electric music for the lighting-rod section. I wasn't clear yet about the middle section," Fagan says.

"Wynton gave me nine sections of music, told me to do what I wanted with it, and left for Europe. That's a big gift from a composer. He trusted my vision and my ear."

Fagan divided the music and his choreography into three separate but connected sections, calling the first "Lighthouse," the second "Memories," and the third "Lightning Rod." He so loves one section of the music that, in "Memories," he uses it twice, first in a rhythmically experimental solo for Norwood "P.J." Pennewell that encompasses super-fast footwork and legato arms; and then again in the next section that depicts a ménage a trios between dancers Natalie Rogers-Cropper, Nicolette Depass, and Vitolio Jeune. (This will mark a return to the stage for Rogers, director of the Garth Fagan Dance School, after a seven-year hiatus.)

"Griot New York" and "Lighthouse/Lightning Rod" can both be considered abstract pieces of dance, but with some very concrete images. Fagan describes the former as a loose depiction of urban struggles during the 1990's, with topics including poverty and AIDS. His new work explores the dualistic relationships between danger and security, between emotional balance and emotional depth and growth. It was the idea of a lightning rod itself that first captivated him.

"It's intriguing that positive things exist in dangerous areas. Tumultuous ocean waters and rocky areas are not to be fooled with, but lightning rods can protect. In all our lives there are lightning rods and lighthouses. Like with kids. A parent knows what the lightning rod is to calm that child down. Or when you're having a bad day, you know where you need to find that lighthouse or lightning rod — maybe a cup of tea, maybe a glass of wine," he says.

The abstract is rendered concrete by Guggenheim fellow Alison Saar's edgy set design, her striking sculptures rising from the stage.

"Never did it occur to me that her lighthouse would be an 18-foot tall woman with one breast out," Fagan says. "So beautiful and poetic. But it was too tall for our purposes. It spread out the focus between the dancers and itself too much, so we refined it a bit to better suit the stage."

Saar's work also adds impact to the ménage-a-trios section in "Memories," in which a sort of brambly headed sculpture — fence? hedge? — with glowing red eyes seems to bear witness to the intimate encounter.

The last section of "Memory" pays tribute to important Fagan dancers who have died, as well as touches on slavery.

"I reflect back on slavery, but not the blame-game slavery. I focus on two women healing each other, loving and supporting each other, while running around them you see people in pain and terror," Fagan says.

The section ends with another nautical image, a ship pulling across the stage while the two women, Lindsay Renea and Shanon Castle, physically support each other.

Costume designer Mary Nemecek Peterson, who worked on the musical adaptation of "The Lion King," also deserves a nod for her emotionally evocative creations, especially in the frenetically wrought "Lightning Rod" section that opens with the whole company — except Pennewell — on stage. Solos, trios and quartets resonate with electric energy. It is FAST.

Or, as Fagan puts it, "They really boogie up a storm."