February 07, 2020
Even after a blistering round of mid-year staff cuts, Rochester City School District superintendent Terry Dade predicts the district will still be approximately $35 million short at the end of this budget year. 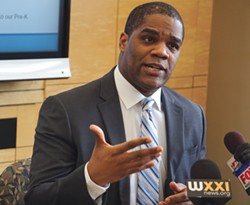 The district is now seeking a state bailout to plug that hole. Dade and Assembly member David Gantt have both asked the state to front $35 million to help the district — money it would have to pay back over time — though Gantt wants the state to require monitors for the district. The monitors would have oversight over the school board and district officials.

But even if the district gets the $35 million, it won’t be the end of its money troubles. During a news conference Friday afternoon, Dade said he expects the 2020-21 budget to have a $55 to $60 million gap.

“This is due to a lot of structural issues we have to face here at RCSD,” Dade said during a news conference Friday afternoon. “An over-expenditure of expenses and not getting the revenue we need is compounded by a lot of the decisions over the years.”

State auditors warn that RCSD budget is still $40 million short
By Jeremy Moule
News
Dade pointed specifically to the hiring of about 600 new staff members over the past decade as the number of students in the RCSD has fallen.

While schools across the nation are grappling with dropping enrollment rates, Rochester’s losses are steeper than at least some of their peers. Buffalo City Schools, for example, had 31,203 students in the 2018-19 year. A decade prior, they had 32,732.

The state assistance the district is seeking is not a permanent solution, and the District’s issues run deeper than a one time budget gap, Dade acknowledges. But not receiving the $35 million in state aid spin-up, which the district would have to repay, would place RCSD in a dire situation.

A report from the state Comptroller’s Office, which was released in late January, cautioned that without severe cuts, borrowing, or outside intervention, the district wouldn’t be able to pay its bills by the end of June.

The cuts would have to be pretty severe to bridge the impending gap. Dade estimated that mid-year teacher and staff layoffs, which took effect at the start of this year, will save the district about $20 million through 2021.

With the problem snowballing year over year, Dade said now is the time to make structural changes and adapt how the district operates.

The district recently rolled out one such plan, which would consolidate 500 pre-k slots at schools 57 and 44. Those slots are currently designated for local nonprofits.

That could save the District over $4 million on an annual basis, Dade said.

“At the end of the day, whatever Governor Cuomo wants to put in place to get us the $35 million we need, I am not going to argue against,” Dade said.