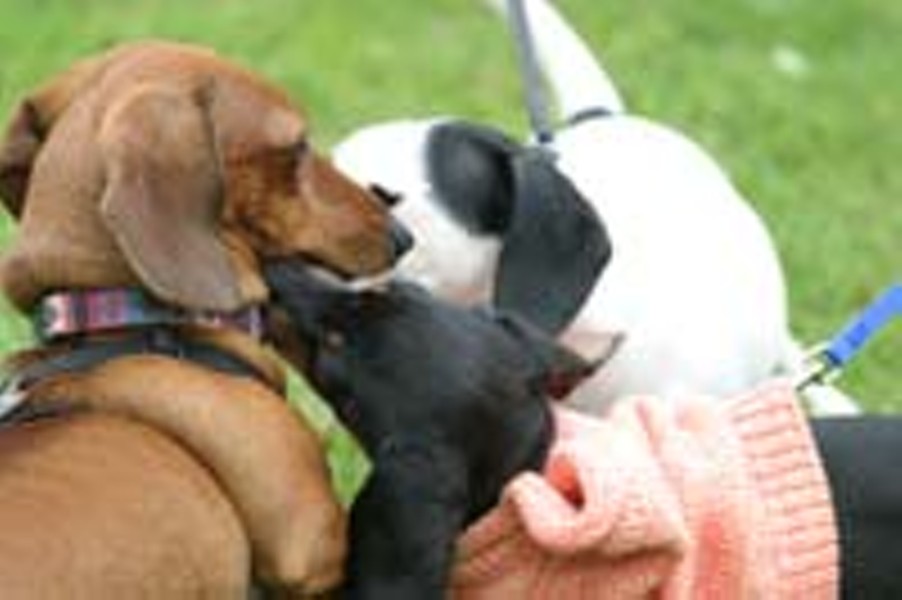 Mary Lyle, one of the organizers of Rochester's Dachshund Parade, expected about 60 dogs to gather this past Saturday for the third annual march down East Avenue. "We had 41 dogs last year, and this year we've had interest from people as far as Buffalo," she says as she distributes photocopies of "The Doxie Song." ("It has an oom-pah-pah beat.")

Imagine her elation when more than 100 dachshunds, many decked out in tiny jackets, long, narrow sweaters, and even (va-voom!) red pleather, assembled on the lawn of the Episcopal Church rectory. Traditional black and brown, wire-haired, longhaired, miniature and spotted dachshunds were all represented.

And the owners were no less varied. Patty Ragan calls Ginger, who, at 16 may have been the grandmother of the bunch, her "very first baby." Pre-teen sisters Kellianne and Alaina Mohorter brought their dogs, also siblings, in from Canandaigua. Rolf Paschedag brought three-month-old Lily out for her first official dachshund strut. Looking out over the lawn, Paschedag sums it up best: "Not a frown in the bunch. I've never seen so many happy people."

Ray Rowling and his wife Billie were there with their two-dachshund herd.

How long have you been wrangling dachshunds?

Cyrus is 3 and Pocahontas (Pokey) is 5. We had another dachshund 40 years ago, then we took some time to do other things. Once you've had a dachshund, you'll never want to have another kind of dog.

What's so great about them?

They have a mind of their own. They'll keep you laughing all day long.

What do they do that's so funny?

Oh, they'll jump in bed with you and then roll around, they'll play with you.

Did you participate in last year's parade?

Yes, we did. The lady in charge stopped traffic on East Avenue, and we all walked across the street, up and around the Eastman House driveway and back here to the rectory. It was wonderful.