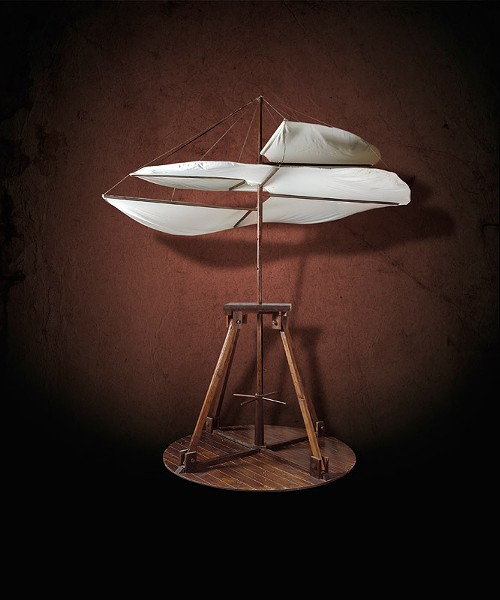 PHOTO PROVIDED One of the flying machines, modeled after Leondardo da Vinci's sketches, on display at Rochester Museum and Science Center as part of the "Da Vinci the Genius" exhibition.
Through May 17Rochester Museum and Science Center, 657 East AvenueMonday through Saturday, 9 a.m. to 5 p.m.; and Sunday, 11 a.m. to 5 p.m.Admission to special exhibition including RMSC general admission: $2-$17, free to children under 3 years old271-4320 | rmsc.org

Humble beginnings don't predict all there is to a life. Leonardo da Vinci was born out of wedlock to a peasant woman and a respected notary, but due to a precocious talent that exposed him to the movers and shakers of the day, he would go on to became one of the most celebrated figures of the Italian Renaissance — and influence the thinking in many fields of learning. The Rochester Museum and Science Center is currently hosting an extensive exhibit on the prolific man, whose work in diverse subjects is still relevant nearly 500 years after his death.

At 86,000 square feet, this is the largest exhibition that RMSC has ever hosted. Teaser components of the show — which are included with museum admission and don't require the special exhibition fee — include a short video in the first-floor Bausch & Lomb auditorium on da Vinci's "The Last Supper," and a second video on the second floor landing featuring live-action storytelling of the artist-scientist's life.

The main exhibit takes up the majority of the museum's third floor, and is divided into sections focusing on his work as an artist, anatomist, and inventor in various fields, including engineering, music, optics, and weapons. Visitors can borrow a device to take the audio tour and learn more about da Vinci's life and endeavors at numbered sections of the exhibit.

Curving hallways lead this way and that toward replicas of flying machines and an in-depth look at the enigmatic "Mona Lisa," but in the space that functions as the exhibit's lobby, we are given an introduction to the iconic figure himself. Da Vinci packed his life of wonder into a mere 67 years (he lived from 1452 to 1519). He was close friends with historian and political philosopher Machiavelli and painter Botticelli, and he experienced rivalry with fellow artist Michelangelo.

At six-foot-six, da Vinci was a gentle giant: a vegetarian and a pacifist whose ideals were at odds with some of his work. He took commissions to develop weapons and crafty war tactics for the military in order to fund his more civil concerns.

The section on da Vinci's weapons inventions and improvements is fairly disturbing, his level of brutal ingenuity hard to reconcile with the earnestly anti-war voice in his writings. It's always been the case that talent has been exploited by those with means, and uneasy covenants are still a thing. For example, earth-loving geologists have been funded by those who would use the research to locate and mine for minerals and fossil fuels.

More than 6,000 pages of da Vinci's notes, sketches, and diagrams survive to this day, and are divided into various codices held in the collections of institutions around the world. Replicas of these pages are placed throughout the exhibit, under glass in recreated notebooks, or blown up and mounted on walls to offer close examination of meticulously detailed anatomical studies.

Though da Vinci's particular attempts at flight never came to fruition, it's important to note the importance of his more workable, if less glamorous, engineering ideas.

Da Vinci was an empiricist, but also a scholar of history, and his notebooks make reference to the innovations of those who came before him. He often worked to improve upon existing tools and systems, whether tweaking a device for threading screws or redesigning the city model to prevent future plagues.

Great flying machines beckon from behind glass doors and down the hallway to the right, but don't overlook the replicas of smaller inventions placed just inside the space. With little more than wood, rope, metal, and canvas, da Vinci developed — or improved upon earlier models for — sensitive devices to measure the force and direction of the wind, the speed of wind or water, the measurement of humidity, and a slope machine to determine whether a flying craft was level with the horizon, or not. A fun, hands-on section of some of da Vinci's engineering innovations is located in a hallway to the left of the exhibit's main room.

The flying machines themselves are imposing, and vary greatly in approach to the problem of getting heavy humans access to the sky. An avid student of nature, da Vinci's obsession with flight manifested in apparatuses that emulated the flight of birds and bats. Exhibition info notes that da Vinci eventually realized that our bottom-heavy weight and strength distribution would not allow us to fly by means patterned after birds, which spawned da Vinci's designs that foreshadowed gliders, airplanes, helicopters, and parachutes.

Many of the models are accompanied by scientific notes which follow an "if, then" model — "If the operator can manipulate this lever quickly enough, then lift will be created" — and when proven false, the inventor would rework or abandon the plan for a new model. It's both fascinating and terrifying to consider that individuals tested out these necessary precursors to modern flight.

Experiments in improving instruments of music, optics, and time are explored with objects recreated from sketches and notes, and include a wagon-drawn, early drum machine, which was meant to make an approaching army sound much larger than it was; and an early model of a projector.

Tucked in and around the invention displays are replicas of da Vinci's masterful paintings — commissions by powerful men who paid the artist's living so that he could pursue his fascinations freely. Prominent subjects are the riches-dripping wives of the ruling class and figures from Christian lore.

Quite a lengthy potion of the show is devoted to the mysteries of the iconic Mona Lisa, with intriguing bits of trivia regarding her creation, her winding history, and the new technology that has revealed more about da Vinci's artistic genius than ever before. This particular space feels like a place of worship, with its numerous saturated, enlarged reproductions of the small painting's nuances, and the resonant sound of Renaissance choirs, instruments, and whispered prayer drifting throughout the space.