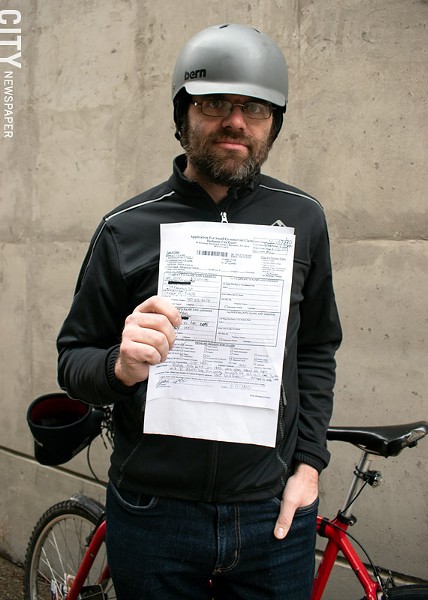 UPDATE: Judge Marilyn Milian dismissed the motorists claim against against cyclist Bryan Agnello. "She wasn't too happy with him," Agnello said Friday.

A Rochester man who was struck by a driver as he biked on Culver Road, and was then sued by the driver for damaging his car, has had his day in “The People’s Court,” and the episode will air at 5 p.m. Thursday on Fox Rochester, channel 31.

Bryan Agnello’s can’t-make-this-stuff-up story was picked up by news organizations across the world and became internet famous. The attention was fueled in part by wild claims from the driver, Jovonte Cook of Rochester, and it landed Agnello and Cook a segment on the reality show starring Judge Marilyn Milian.

The appearance was taped on July 16, according to Agnello, a senior broadcast engineer at WXXI, a media partner of CITY. He said he could not discuss the verdict until the episode was broadcast.

Agnello was biking on Culver Road near the I-490 interchange in January when Cook, who was driving a Ford Fusion, rear-ended him, according to a police report. Agnello, who had a blinking red light on the back of his bike and was decked out in reflective rain gear, had moved to the left side of the north-bound lane and slowed to make a left turn onto a side street when he was hit.

The force of the collision flung Agnello onto the hood of Cook’s car, but he escaped serious injury, according to the police report. His bicycle, however, was mangled.

A month later, Cook sued Agnello for $700 in small claims court to cover the damage to his car. Agnello, in turn, filed a counterclaim for $2,500 to cover the cost of his destroyed bicycle, the time he spent recuperating, and the aggravation.

Cook wasn’t ticketed or charged as a result of the collision, and he offered versions of the incident that vary wildly from police reports.

In his court filing, Cook stated that Agnello was riding his bike on I-490 at about 60 mph and that he “didn’t see him coming at me at all due to bad weather.” It was raining when the collision occurred.

During an interview with CITY, Cook estimated Agnello was traveling 80 mph and “came out of nowhere and splashed on my front windshield” while Cook was driving on I-490 while on his way to his job delivering pizzas.

Elite cyclists at their top levels of their sport reach 60 mph only under certain circumstances, such as a steep downhill descent or on curved tracks designed for speed.

Both sides dropped their claims when they agreed to appear on “The People’s Court.”