The Singh brothers have done it again. The people who brought you Naantastic and Sweet Mist Ice Cream have expanded their brand, this time in the genre of pizza. Rebel Pi Global Pizza is the newest fast-casual eatery in Greece, located across the road from Greece Ridge Mall. Aman and Ajay Singh are like blockbuster movie producers of the culinary world, with fewer (no) car chases, and much more food. I was trying to think of a joke better than "the only explosions are in your mouth," but here we are. But if you would be so kind as to read the rest of this review in your best "In a world..." film preview voiceover, I would greatly appreciate it.

My story begins a few weeks ago, when I ran into Harmeet Kaur of the local Instagram handle Harmeet's Eats (@harmeetseats). A few days later, she sent me a message inviting me to try out a new pizza place that boasts off-the-beaten-path flavor combinations from around the world, such as Korean BBQ, Jamaican Jerk, and Indian Makhani. I will rarely pass up an opportunity to consume pizza, even if I have to go to Greece to get it, so within the week, I was in pursuit of this new treat.

Rebel Pi is located in a shopping center that's packed with food options, a few beauty salons and a tattoo shop, but the pizza spot stands out, facing the road with a big sign featuring cartoon flames shooting out of the "L," which is stylized to look like a stove pipe. Inside, the far wall is emblazoned with "Rebel Pi" in huge graffiti-like lettering, about 10 feet above the mouth of a roaring brick oven. At the time of the evening that I visited, the black ceiling made it feel like we were out in the open, and the industrial wood and metal chandeliers seemed to be hanging in space on their own. Smooth wood flooring throughout the dining area climbs about three feet up the dark red walls. The restaurant resembles an old train yard and warehouse where my artist friends used to hang out and paint giant murals on abandoned boxcars and the building, except Rebel Pi is clean, and there's is no risk of getting cited for trespassing. With interior design alone, the Singhs effectively embodied the "rebel" part of their name. Before visiting, I was hoping for a few 𝛑 puns, but this works much better. 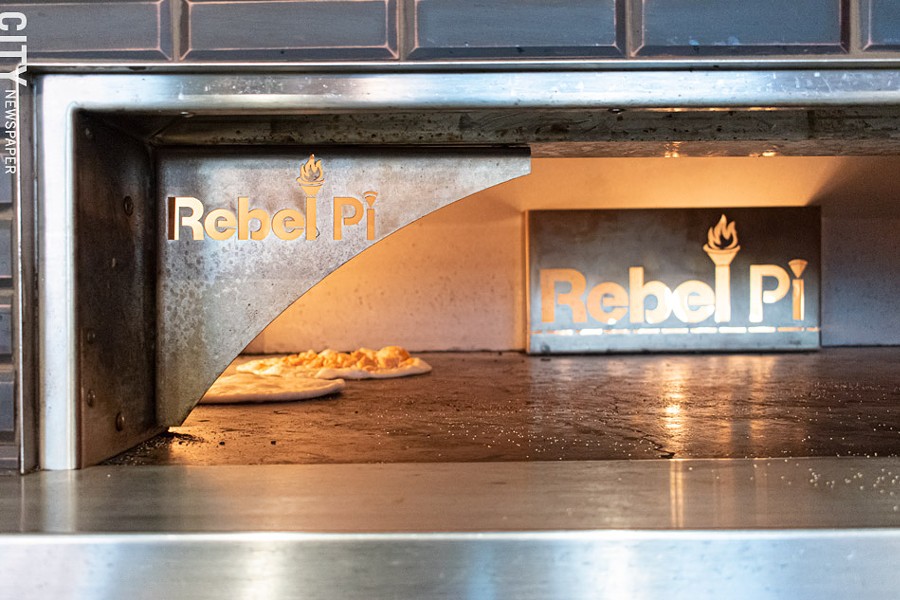 After a few seconds of gazing at the interior, I looked around and realized the place was bustling like a city during rush hour. The queue of folks ready to order was constant but moving steadily along as people made their choices and those behind the counter efficiently filled incoming orders, and the dining area was nearly full. The line of delivery orders forming behind the counter would keep shifting but stay about the same size as their drivers would come in to take them to their destinations. This was peak efficiency at the busiest time of their night. Amid all this, the employees still seamlessly did their jobs and were able to rib each other with jokes, with the type of camaraderie a family has when making a big dinner.

While I was disappointed in the lack of 𝛑 puns, the menu delivered. The "global pizzas" are inspired by flavors from around the world, and they are all $10.99. Everything sounded so good that it took me nearly five minutes to order. "Phenomenaan" is an Indian-themed pie with makhani, mozzarella, paneer, onion, ginger, and cilantro. "Seoul Mate" includes Korean BBQ sauce, mozzarella, meatballs, red onions, and cilantro. "Tropic Like It's Hot" has mango chili, mozzarella, chicken, peppers, onions, and garlic.

But I chose "Olive You," a Mediterranean pizza with white sauce, mozzarella, feta, black olives, tomatoes, and gyro. Of all the playfully cute names for the pizzas, my favorite is the "Same Same." This is a Thai-themed pizza with sweet chili, mozzarella, chicken, bell peppers, and onion. Not only does this sound delicious, the name reminds me of the phrase I would hear a lot when I traveled through parts of Thailand and Cambodia while living overseas. "Same-same" was a quick way to tell us tourists haggling prices that two products were similar, or that what we chose was okay, or that the flavor palate of an entree was on par with another. Nostalgia counts as a free topping at Rebel Pi.

My 'za was delicious. It would have been fine as it was with a standard-issue naan crust, but I upgraded to a gluten free broccoli crust ($2; they also offer GF cauliflower crusts), and I followed Kaur's encouragement to ask for the garlic herb butter on it. I am not usually a fan of white pizzas, but the sauce is not as overbearing as it can be on some of them. I made short work of it, and I also sampled one of the wings ($6.99 for six) with makhani sauce. Unlike a lot of fast casual places, Rebel Pi wings are fire-roasted instead of deep fried, so all the moisture stays in the wings, and the meat stays tender and nearly falls off the bone.

And, of course, if none of the menu pies interest you, you can build your own. Though most of the pies in the shop can be made vegetarian, Aman says that more plant-based and vegan protein options are on the way. I'd be on the lookout for an updated menu soon; the Singhs are ambitious and continuously tweak and improve their culinary universe as it expands.