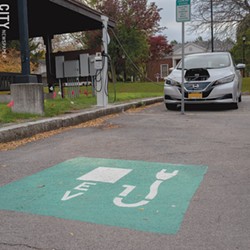 The proposal, which Cuomo outlined in his budget address earlier this week, includes a $3 billion Restore Mother Nature Bond Act for conservation, $9 billion for offshore wind development, and funding to advance the state's transition to renewable energy and carbon-free transportation.

“We start with the most aggressive climate change program in the country,” Cuomo said in his address. “Because my friends, the clock is ticking and it's ticking faster and faster."

According to the governor’s office, the state is on course to get 70 percent of its electricity from renewable sources by 2030 and for the electricity sector to hit net zero greenhouse gas emissions by 2040.

Jessica Ottney Mahar with the Nature Conservancy said that she’s most excited for the impact that the Restore Mother Nature Bond Act could have.

“So that wildlife habitat is restored and clean water is available for communities and so that our communities are more prepared for the impacts of extreme weather,” she said.

Cuomo’s budget plan would require the five largest transit authorities in upstate New York to transition a quarter of their fleets to run on electricity by 2025. His proposed budget includes $1.5 billion to support that requirement, to help the New York City transit system electrify its bus fleet, and to install electric vehicle fast-charges on key corridors across the state.

Susan Hughes-Smith with the Rochester People’s Climate Coalition said she’s in favor of the governor’s goals. However, she stressed that efforts to reduce carbon emissions from transportation need to consider the way people use public transit in upstate New York.

“If we want to lower our transportation emissions, we have to address getting people out of their personal vehicles or ensuring that the personal vehicles that are left become electrified more rapidly,” she said.