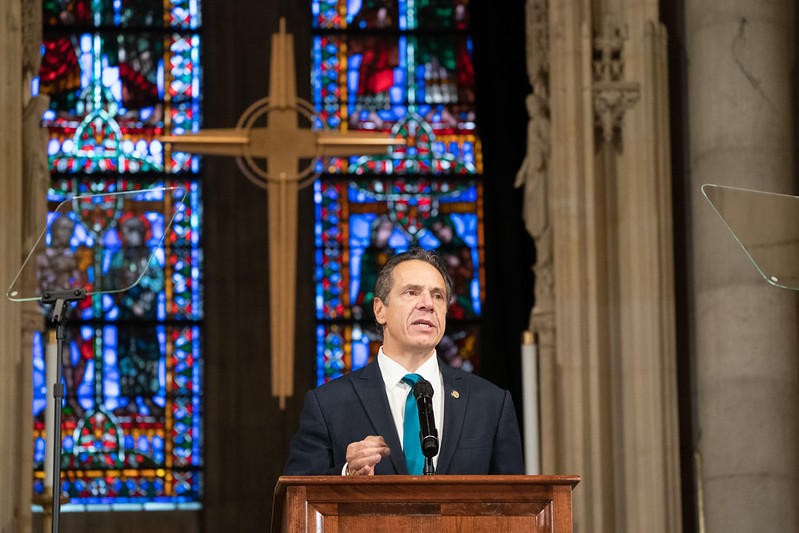 Gov. Andrew Cuomo, in a speech at a Black church in Manhattan, vowed to sue the administration of President Donald Trump for violating the constitutional rights of African-American and Hispanic New Yorkers, if it does not make changes to its COVID-19 vaccination plan.

Cuomo on Sunday condemned a Trump Administration plan that relies heavily on private pharmacy chains like CVS and Walgreens, and private hospitals and doctors’ offices to distribute a COVID-19 vaccine, when one is ready. He said many poorer communities, where Black and brown New Yorkers live, don’t have those pharmacies and live in what Cuomo called “health care deserts”.

“The president talks about CVS and Walgreens and national chains,” Cuomo said, speaking at the Riverside Church in Manhattan. “But they are mainly located in rich communities, not in poor communities. We can’t compound the racial injustice that COVID already created.”

The governor said the Trump administration's plan violates the constitutional rights of African-Americans and Hispanics, under the equal protection clause. He added that the state, along with the Urban League, will go to court if the plan is not changed, saying “there can be no more fundamental right” than access to the vaccine.

“Any plan that intentionally burdens communities of color to hinder access to the vaccine deprives those communities of equal protection under the law,” Cuomo said.

Cuomo said he plans to mobilize an army of health care workers, community leaders and faith based organizations to make special outreach efforts to public housing projects and low income communities, to make sure the vaccine is distributed equitably. He says he’s discussed the plan with legislative leaders, including Assembly Speaker Carl Heastie, who attended the speech.

But the governor said he needs Congress to act on a federal relief package to fund those efforts. There has not been a pandemic related federal bail out measure since April. The state has a $15 billion dollar deficit, much of it pandemic related.

Cuomo said African-Americans and Latinos have a higher death rate from the coronavirus than whites, as the disease exposed underlying weakness in a health care system where people of color are more likely to have underlying conditions like diabetes and asthma.

The governor’s remarks come as his on going feud with Trump has intensified in recent days, with the President saying on Friday that New York would be the last of all of the states to receive the vaccine.

President Trump remains in office until January 20. President-elect Joe Biden is likely to enact a different vaccine distribution plan, but Biden’s advisors warn that Trump’s delays in giving them access to federal agencies during the transition could slow those plans.