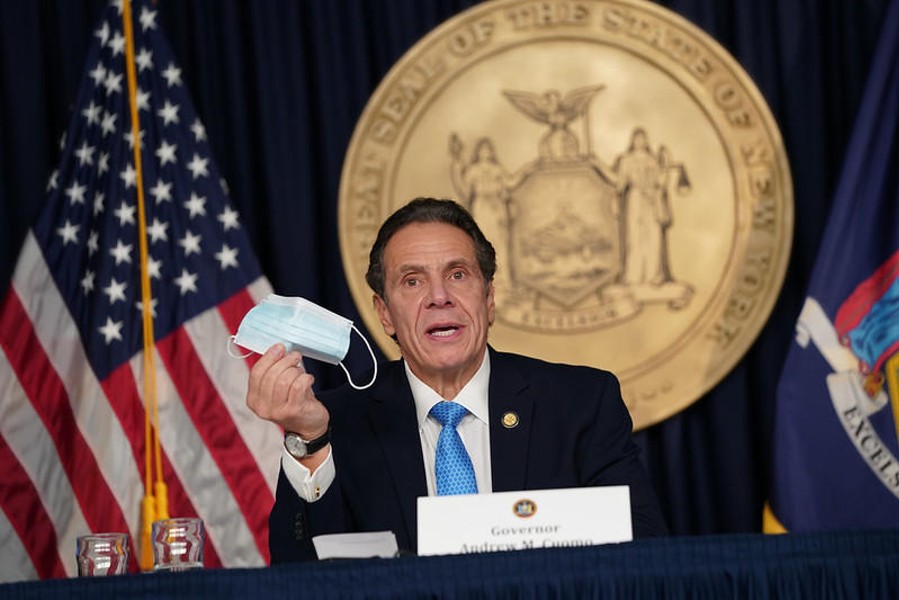 PROVIDED BY THE OFFICE OF THE GOVERNOR Gov. Andrew Cuomo at his daily news briefing on Nov. 30, 2020.
As the state's rate of COVID-19 infection topped 4 percent for the second day in a row, Gov. Andrew Cuomo on Monday announced new emergency hospital rules aimed at preventing the health care system from becoming overwhelmed.

They included calling on retired doctors and nurses for help and canceling elective surgeries in Erie County. Cuomo also would not rule out another statewide economic shutdown if the infection rate continues to rise.

Cuomo, likening the COVID-19 pandemic to an ongoing war, said it was time to shift battle tactics again. He said future decisions to limit economic activity and in-person gatherings will take into account a region’s hospital capacity.

Under new rules, all hospitals in the state will have to immediately boost available bed space by 50 percent, and emergency field hospitals will prepare to be reactivated. To prevent individual hospitals from becoming overwhelmed, private hospital systems will be required to move patients between their facilities, and even transfer them to another system if needed.

“We are not going to live through the nightmare of overwhelmed hospitals again,” Cuomo said.

Ne noted that the virus was largely concentrated downstate in the spring, and that it was possible then to shift patients and hospital personnel to other regions to keep enough beds open. But he said that is no longer possible now that the virus is rising across the state.

The 30,000 out-of-state doctors and nurses who volunteered to assist New Yorkers earlier this year also will not be available because they’re needed in their own states, where in most cases the virus is climbing at an even higher rate.

He put out a call for retired medical professionals to consider coming back to work.

“Every hospital has to identify retired nurses and doctors now,” Cuomo said. “We are already experiencing staff shortages. Staff just gets exhausted after a while. They’ve had a horrendous year.”

In Erie County, where the virus rate is the highest in the state at over 7 percent, elective surgeries will be canceled.

Cuomo said he was sticking with the "microcluster approach" to controlling the disease. That includes designating yellow, orange, and red zones with corresponding restrictions for things like religious gatherings and indoor dining. But there will be new modifications based on each region’s ability to care for hospital patients.

And he said the threshold numbers for declaring those zones — a 10-day positivity rate of 2.5 percent for yellow zones, 3 percent for orange zones, and 4 percent for red zones in cities and slightly higher thresholds in rural areas — are “artificially low.” He predicted that the state will soon surpass those limits as the aftereffects of small gatherings over Thanksgiving drive the rate of the virus even higher.

“There will be a week to 10-day lag before we see that number come to effect,” Cuomo said.

And he said it is likely there will be a further spike in mid-January, after the winter holidays conclude.

Cuomo spoke as the statewide positivity rate hit 4.57 percent on Sunday; 3,532 New Yorkers were in the hospital with COVID-19, and 54 died of the disease.

The governor said unlike the spring, though, every effort will be made to keep the schools open, even in orange and red zones. He said in-person learning for kindergarten through eighth-grade students is a priority, and stricter testing protocols will be required.

Cuomo said so far, the rate of the virus in schools is lower than the average for the surrounding community, so it’s safer to keep kids learning in the classrooms.