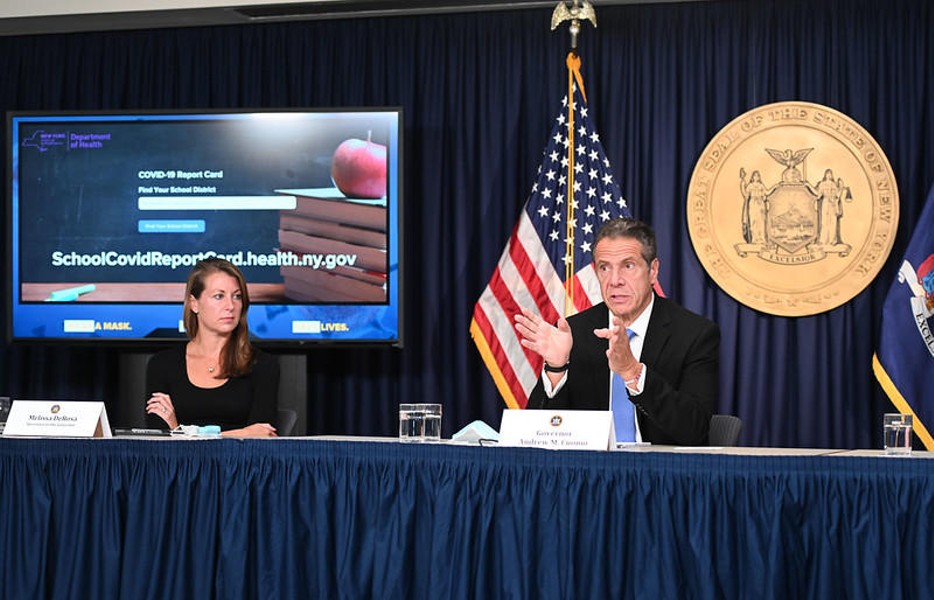 CREDIT GOVERNOR CUOMO'S OFFICE Governor Cuomo holds a briefing on September 24, 2020. At left is Chief of Staff Melissa DeRosa.
Saying he does not trust the federal government, Governor Andrew Cuomo says New York State will conduct its own review of any COVID-19 vaccines that are deemed to be ready for use.

Cuomo says the state will set up a review committee, made up of scientific and health experts, to check that any coronavirus vaccine approved by the federal Food and Drug Administration is indeed safe to be injected into people. The governor says he’s increasingly concerned over whether the approval process has “become politicized” by President Donald Trump, and whether approval of a vaccine might be rushed before it is fully vetted.

Cuomo says state will independently review COVID-19 vaccine
CREDIT KAREN DEWITT / WXXI NEWS
Update Required To play the media you will need to either update your browser to a recent version or update your Flash plugin.

This week the head of the FDA testified before Congress that a vaccine won’t be approved until it meets "vigorous expectations" for safety and effectiveness, and that the FDA will not be influenced by political pressure. A careful review would likely put distribution off the virus off until well after Election Day. Afterward, President Trump said the White House might not sign off on the new protocols- saying he believed the FDA’s statements were a “political move.”

Cuomo says he also has doubts that the federal government will be able to distribute a vaccine efficiently. Some forms now being developed require two separate shots of the vaccine to 19.5 million New Yorkers.

“They are talking about 40 million doses being administered,” Cuomo said. “This is a massive undertaking.”

He says he does not want to see a repeat of the dire situation last spring, where states had to compete with one another to buy ventilators and personal protective equipment, like gloves and masks.

The governor says the committee will decide who should be among the first to receive the vaccine, based on medical standards, and training for those who will administer the vaccine, as well as conduct a “massive public education campaign” to convince New Yorkers to get the shots.

He says his goal is to conduct a “model vaccination program,” and make New York the “first Covid- free state” in the nation.

Cuomo also announced that the state is adding new data to a website tracking COVID-19 cases in every school district in the state.

In addition to reports from schools themselves on Covid positive cases, the site will also include lab reports culled from the tens of thousands of tests conducted across New York each day.

Cuomo says the lab data will also act as a “check and a balance” against the schools’ self-reporting on coronavirus cases.

The website allows a search by school district and by zip code, and also provides the option to see reports from neighboring school districts to make comparisons.

Cuomo says so far, New York State remains an “anomaly”, and has a lower rate of the virus than most other state and many nations, where the rate of transmission is spiking.