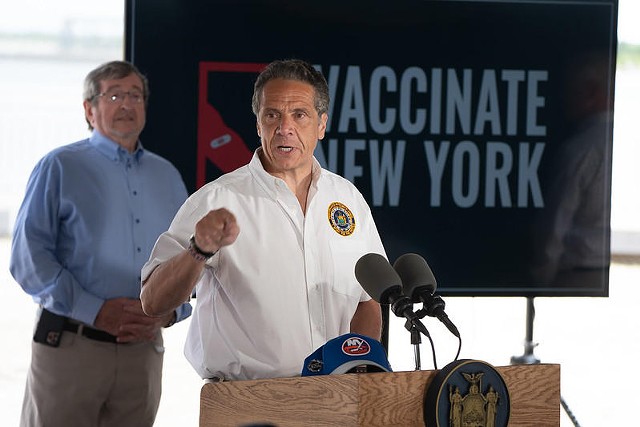 Governor Andrew Cuomo says the state is one tenth of a percentage point away from his goal of 70 percent of New Yorkers 18 and older getting at least one dose of the COVID-19 vaccination.

Speaking at an event in Syracuse on Monday, Cuomo said that Sunday’s vaccination numbers showed 69.9 percent of all New York residents 18 and older have received at least one dose. But he added that the numbers of vaccinated vary greatly by zip code, with rates in some low income urban and rural areas as low as 38.8 percent. The governor urged local governments to focus on those areas and give it “one more push”.

The governor said when the state’s vaccination rate reaches 70 percent of people 18 and over getting at least one dose, he plans to hold a celebration. Currently, the number of adults fully vaccinated and who have received all of their required doses two or more weeks ago is lower, at 60.1 percent.

Cuomo also announced that because of the continued low virus positivity rate — it was at .41  percent statewide on Sunday — the New York State Fair will open later this summer at 100 percent capacity. He said social distancing will still be practiced whenever possible, and unvaccinated people will be asked to wear a masks, though no one will be asked for proof of vaccination.

“That is on the honor system,” Cuomo said.

Cuomo and state fair officials have said they will likely downsize the current mass vaccination site at the fairgrounds, and are considering scaling back other sites, where Cuomo said the activity has slowed to a “trickle”. But he noted there will still be vaccinations available at the fair and other more targeted locations around the state.

On Sunday, 617 New Yorkers remained in the hospital with COVID-19 and seven died from the virus.