Cuomo gets COVID-19 test on live TV, asks more NYers to get tested 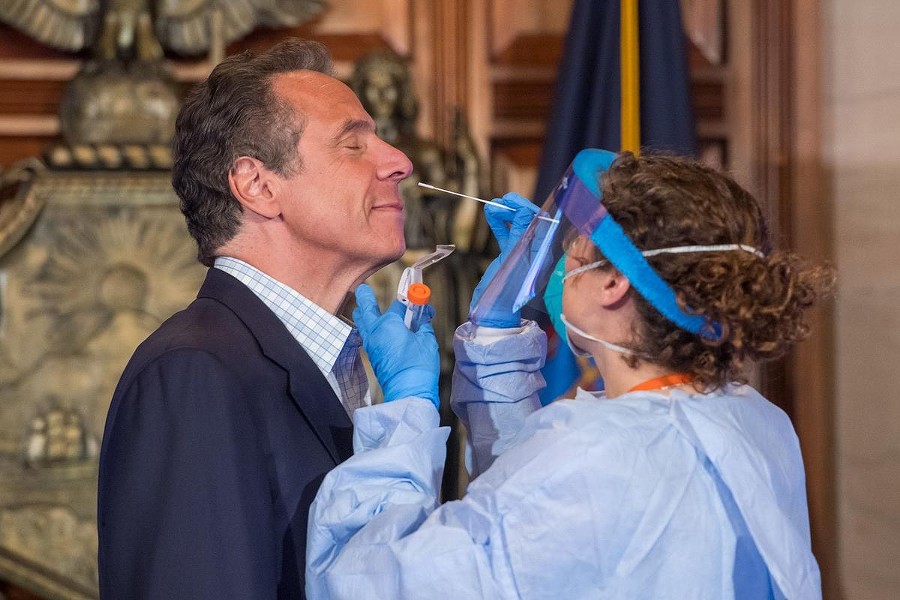 PHOTO PROVIDED BY OFFICE OF NEW YORK GOVERNOR ANDREW CUOMO Gov. Andrew Cuomo is tested for the coronavirus in Albany on Sunday.
Governor Andrew Cuomo made a plea on Sunday for more New Yorkers who qualify to get tested for COVID-19, even undergoing his own test for the disease on live, national television during his daily briefing in Albany.

He also announced that New York will expand the eligibility requirements for a test to all workers who qualify to go back to work under the first phase of the state’s reopening plan, which is in effect for five regions.

Two more regions — the Capital Region and Western New York — took another step toward starting the first phase of reopening Sunday, Cuomo said. Both have now satisfied the state’s requirements for deaths and hospitalizations, but don’t have enough contact tracers.

Cuomo said he’d be speaking with leaders from both regions later in the day to discuss how they can meet the metric. If each can identify the required number of tracers, they may be able to start phase one of the state’s reopening this week.

If the Capital Region and Western New York are allowed to start the first phase of reopening, only New York City, Long Island, and the Mid-Hudson region will remain on full lockdown.

Central New York, the Finger Lakes, the Mohawk Valley, the North Country, and the Southern Tier were allowed this weekend to start the first phase of reopening, which clears construction, manufacturing, and some retail curbside pickup to resume operations.

Cuomo said as each region starts to reopen its economy, people should continue to get tested if they’re eligible. That will help prevent an uptick in the disease, he said, which could trigger regions to roll back their reopening plans.

New York has doubled its testing capacity over the last month, from an average of about 20,000 tests available each day to about 40,000 as of Sunday, Cuomo said. That’s separate from the 35,000 tests the state now has available for employees at nursing homes.

But some of the state’s testing facilities have been underutilized, Cuomo said. New York now has more than 700 testing sites for the novel coronavirus.
He said there’s a sense that people don’t want to get tested because it could be seen as difficult or intrusive, or people don’t know if they qualify. Testing is allowed for all essential workers, anyone displaying symptoms, and people who’ve come in contact with someone who's positive.

Cuomo then invited a doctor into the room to swab him for the disease, which he’s tested negative for in the past.

“It is so fast, and so easy, that even a governor can take this test,” Cuomo said. “That’s how fast and easy it is.”

New York had performed more than 1.4 million tests for the coronavirus as of Saturday, the latest data available to the state. Approximately 350,000 people in the state have tested positive for the disease.

WXXI News is a media partner of CITY.