Cthulhu and Krampus and Kaiju, oh my

When Matt Roberts proposed a monster-themed group show to some of his art homies, "unadulterated overkill" was the aesthetic directive he gave them. The resulting exhibit is a week-long pop-up show at Makers Gallery and Studio Space. The show is bookended by an opening party, which took place last Saturday, and a closing reception and Halloween party on Saturday, October 28, which will include art raffles, costume contests, food trucks, and door prizes.

Leading up to the show, the disturbed dream team — which includes Roberts, John Perry, Bile, Magnus Champlin, and Nick Brandreth — documented their creation of macabre paintings, sculptures, and installations on social media.

Roberts created some incredibly detailed mixed media sculptures of historic and imagined beasts, including the shadow St. Nicholas, "Krampus"; "Parasite Rex," a Tyrannosaurus with a ferocious extra mouth on its chest, complete with dripping plastic saliva trembling in the ambient indoor breeze; and my personal favorite, the bark-and-foliage "Woodwolf." Accompanying each of the sculptures is a dramatic painting after-study.

Champlin is known for his paintings and illustrations, including (in this show) the mixed-media "Read a Book," a neon gem on butcher paper that depicts a girl engrossed in a tome while a tentacled beast busts through the picture plane.

The rest of his work is sculptural, which is a relatively new endeavor, he says. Over the winter he would mess around with Sculpey clay at Brandreth's house, and the resulting pieces are grotesquely impressive. "Kaiju Spawn" is a wall-mounted grate with a green, three-digit hand grasping out at the viewer while a reptilian eye peers through the metal slits. He's also sculpted man-eating plants based on Audrey from "Little Shop of Horrors," the leathery petals embedded in some cases, with real teeth.

John Perry's completely immaculate acrylic paintings range in subject matter from the monsters from "Salem's Lot" and "The Creature from the Black Lagoon" to a series of zombified portraits of the other artists in the show. He's also created some crispy marker-on-cardboard illustrations of cartoonish beasts.

The rotting face central to Bile's painting "Kept" seems to undulate and disintegrate under your gaze, and the longer you look at the piece, the more hidden details emerge. Bile also painted macabre scenes on a saw blade and wood.

And leaning in one corner, Bile's life-sized figurative sculpture, "Container," lingered ominously at the edge of the party like an advanced case of "Weekend at Bernie's." A deteriorated head is visible through a glass tank, rotting hands hang limp at its sides; a stiff in stiff, filthy clothing and feet jammed into work boots. Something about Bile's dead things, whether painted or sculpture, retains the disturbing sense of a sentient presence. At the opening, the guys giggled while they told me about transporting the sculpture to the gallery, and how freaked out they were that a cop or a neighbor would mistake it for a real body.

The quiet spooks of the show are Brandreth's glass plate photography installations. A few slide viewers are mounted on wall at average eye-level, with tiny circular lenses to peep through. And you have to crouch down to interact with the three viewers displayed on low pedestals, which look like tiny television sets with squat, wide screens — Brandreth made these out of volt meters, which he gutted and rewired for his own purpose.

When you press the button to light up each viewer, you're rewarded with a chilling, vintage-looking scene: A pick-up truck full of bodies; a hunter startled by a horned beast; a caped and hooded woman stands in a cornfield holding a skull. Brandreth and his wife made all of the costumes used in the scenes.

"I want you to think they're a snapshot, but in reality, it's really formal and technical," he says of the works, which are dry-plate positive transparencies on 2-inch by 5-inch glass plates.

The images reflect his love of folklore, fairytales, and ghost stories, but he's interested in horror and monsters as metaphor, and as a means to "digest some of the bullshit we all see nowadays in the news," he says. "When you look back at some older films, such as 'Night of the Living Dead' — that's not really about zombies. Horror is an interesting genre, because you have a monster or some sort of creature, and you either defeat it or it takes you out." 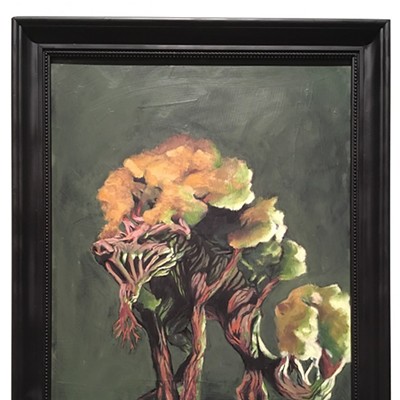