Like most folks, I’ve had my fair share of breakfast sandwiches. It’s a simple, yet tried-and-true concoction that consists of more or less the same ingredients: some sort of bread, meat, egg and cheese. There are dozens of variations and many have their favorites. And now, I have a new one. I tried “The Jammy Sammy” at Fair Pour Café (6 North Main Street, #125 in Fairport) earlier this year while having coffee with my cousin. She ordered it first, and I followed suit, thinking the combination of a Bianca roll, fried egg, goat cheese, triple berry jam and arugula sounded different and intriguing. It wasn’t just intriguing – it was succulently orgasmic.

One bite and the runny yolk and jam oozed out of every corner of the crusty roll. The creamy, tangy goat cheese played well against the sweet berry jam and the peppery notes of arugula. It just hit every note of my palate, creating a perfectly rounded and delicious breakfast. It’s messy, but worth it. It’s one of the few times in my life I’ve licked the plate (in public). fairpour.com

The craft beer movement has exploded over the last decade, and Rochester’s rabid fans always seem to be itching for more. Other Half Brewing from Brooklyn witnessed this firsthand, when hundreds lined up before sunrise on a cold, wintery Saturday morning in March for a mobile can release at Tap and Mallet in the South Wedge. The brewers sold out of 400 cases of their product by noon.

Then in July, it was announced that Other Half had bought the space formerly occupied by Nedloh Brewing Co. (which closed last fall) at 6621 Routes 5 and 20 in East Bloomfield and planned to open up shop here, bringing with them their hoppy IPA's that drives beer nerds wild. It’s not to say the Rochester area doesn’t have a strong craft beer scene already (it does), but I don’t think adding another option is something craft beer fans will object to (I don’t). Other Half’s expected open date is as hazy as its brews, and is dependent somewhat on state and local permit approvals, but when it does crack open, I expect drinkers will welcome this new Rochester transplant with open arms and a hearty “Cheers!” otherhalfbrewing.com 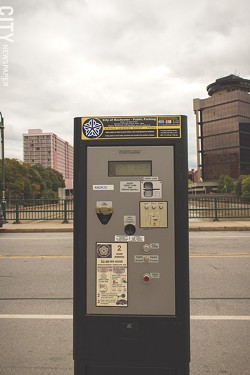 Rochester leaders have long aimed to bring more people downtown to boost business and tourism. But parking is usually an issue. I’ve heard people complain there simply isn’t enough parking, or that it’s too expensive. So it caught many downtown businesses off guard when in late June, the city extended metered parking times by two hours to 8 p.m. The city’s reasoning? It needed the extra revenue. That’s understandable. But many business owners were outraged, complaining that customers wouldn’t come downtown for dinner or other evening activities because of it, or they’d simply give their money to Uber or Lyft instead.

By late August, city leaders had seemingly bent to the pressure, and the metered parking times went back to its original hours (8 a.m.-6 p.m. on weekdays), but with a higher rate of $2 an hour instead of $1.50. I don’t know if the extra 50 cents an hour will still be a deterrent to people coming downtown. I don’t know if it’ll help the city make up the difference in the budget. I don’t know if this was the city’s plan all along. What I do know is that it’s an awfully convenient way to quiet the noise, at least in the short run.

A major piece that gets lost in the talk of Rochester’s urban renewal is livability: maintaining a safe place to work, play, live, learn, mingle, and manage basic needs. Rochester has a long way to go on this issue, but it’s worth noting a small, easily forgettable decision that made many Rochesterians’ experience a bit more livable. A permanent Department of Motor Vehicles office in downtown Rochester has at last been opened. For 15 years, city residents had to guess or Google where to complete mandatory, mundane tasks like renewing a license or ID, surrendering plates, or applying for a driver’s permit.

DMVs existed in Irondequoit, Greece, Henrietta and other suburbs. The city of Rochester was covered by a roving unit with limited hours, shuffling from location to location – much to the detriment of the region’s 16,000-plus bus riders, the poor, and anyone who didn’t want to go to a strip mall to update their registration. More than a Morton’s The Steakhouse, another brewery, coffeehouse or bar named after a verb, this addition is a plus for most of Rochester.

In a building tucked back slightly from the road at 34 Winthrop Street in downtown Rochester, Animatus Studio has an unassuming appearance, in keeping with its status as one of the more unsung institutions of the city’s film culture. And inside, Animatus is a veritable hive of creativity. Founded by filmmaker Fred Armstrong, the studio is brimming with ephemera from animation history, including an entire room devoted to The Beatles’ “Yellow Submarine,” the film that first opened Armstrong’s eyes to the more unconventional possibilities of the medium.

In addition to being a full-service animation studio, Animatus offers workshops for aspiring movie-makers throughout the year, providing training in traditional, paper cut-out, and clay animation techniques. Over the years, the studio has produced some impressive alumni, Oscar-winning Disney animator Brian Menz (“Frozen,” “Big Hero 6”) being just one example. Animation is Armstrong’s calling, and through Animatus – celebrating its 30th anniversary this coming year – he continues to spread that passion by inspiring a new generation of young filmmakers. animatusstudio.com

Ruby Sparkles is Rochester’s premier peeler-and-squealer, a buxom stripteaser who, as everybody knows, likes to dispose of her clothes on the bandstand. Of all the burlesque practitioners in Rochester, Ruby Sparkles is the most traditional performer, carrying the torch of those who shimmied and shook generations before her – legends like Blaze Starr, Tempest Storm, and Dixie Evans. But it’s not her legs as she prances just out of reach. Nor is it her pasties as she spins them like twin lawn-mower blades. No, it’s her infectious smile: like a come-hither kiss, a silent laugh that as a topper to her performance, all adds up to WOW.facebook.com/SirensStilettosCabaret/

Tribute shows have taken hold in the Rochester music scene, with no signs of easing up. Did it happen overnight? Seemingly, there isn’t a week that goes by without a local band playing a classic rock album live, in its entirety, or a collective of musicians paying homage to an influential musical legend with a set wholly populated by covers. I don’t mean to go full-curmudgeon. I’ve toyed with the idea of planning a Jeff Buckley tribute show myself. Great music and the consequential artists who’ve created it deserve to be celebrated. And if concertgoers clamor for it, and the hosting venues and promoters benefit from increased traffic and revenue, I say “Godspeed.

But there are such things as diminishing returns, and I worry that if the local scene is consistently saturated with such concerts, it could dilute the meaningfulness of such events in the future. Additionally, more time and value given to the performance of covers mean Rochester musicians have less opportunity to showcase their own songs. But I’m a naysayer with solutions. What if artists performed covers of an icon alongside originals inspired by that artist? I’m just sayin’.

Rochester’s cultural diversity is one its greatest qualities, and it’s abundantly clear from the plethora of international cuisine options in the city. To get a flavor for foods from a wide swathe of cultural traditions, a tour of Clinton Avenue may be your best bet. On South Clinton Avenue, just past South Goodman Street, a veritable cornucopia awaits.