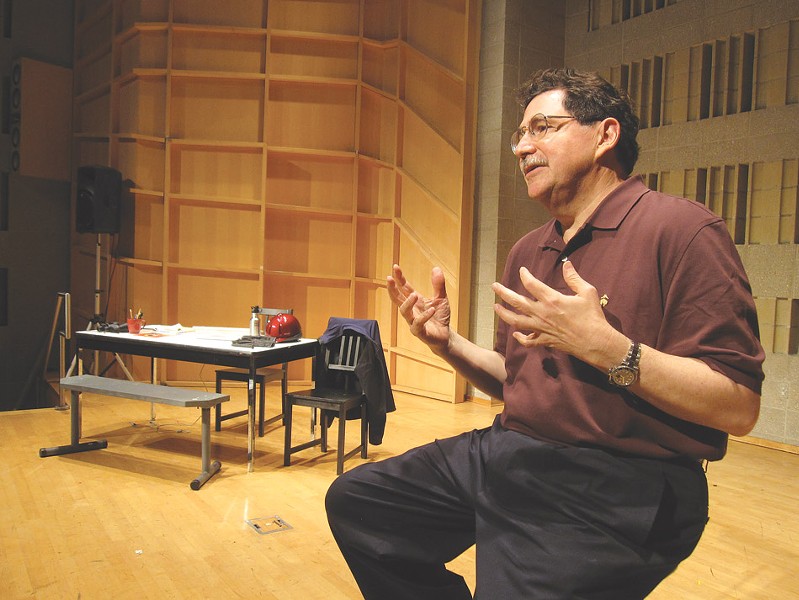 One of Rochester's most experimental theater companies, WallByrd Theatre Co., will present not one but two shows during this year's Fringe. One is a theatrical reading of a new "Dracula" adaptation; the other is "The Kiss" by award-winning playwright Murray Watts. The two-person show centers on a mysterious meeting at a park bench. It's déjà vu meets how-do-I-know-you as two strangers struggle with the surreal feeling of their lives being intertwined — and how even the smallest human interaction can have a lasting impact. (Thursday, September 15, 8 p.m.; Saturday, September 24, 9 p.m. RAPA @ SOTA: Black Box Theatre. $12. All ages.)

The last time Dangerous Signs performed at Fringe, a scout happened to be in the audience and invited the group to audition for "America's Got Talent." This year, in collaboration with RIT's Masquers Drama Club, the group will meld classic theater with sign language, spoken word, dance, and song to present "Hands Full of Shakespeare." Get there early to reserve a seat. (Saturday, September 24, 1 p.m. The Little: Theatre 1. Free. All ages.)

Fringe is full of visually stunning options guaranteed to captivate children — but when done creatively, sometimes puppets are for adults. Open Hand Theater, a Syracuse-based company that focuses on puppetry, masks, and international theater traditions, will perform an adult adaptation of the classic "Don Quixote." The play-within-a-play features Russian master puppeteer Vladimire Vasyagin in the title role. (Thursday, September 15, 7:30 p.m. MuCCC. $10-$12. Appropriate for ages 13 and over.)

Rochester's subway isn't functioning anymore, but locals can imagine that a lot of human interaction once took place on those train platforms. In "Underground Episodes," a Philadelphia-based troupe blends poetry, acting, and music to create an interactive experience centered on experiences that take place within a subway. (Saturday, September 17, 1 p.m. and 7 p.m.; Sunday, September 18, 4 p.m. TheatreROCS Stage: Main Stage. $15. Appropriate for ages 13 and over.)

"The Shadow of the Hummingbird"

This short piece by South African playwright Athol Fugard (known for his sharp analysis of South Africa during apartheid) begins when a 10-year-old granddaughter plays hooky from studying and visits her grandfather instead. The show features a Rochester-based director Lindsay W. Baker (co-writer of "Austen's Pride: A New Musical of Pride and Prejudice") and cast Alden Duserick (Scout in Geva's "To Kill a Mockingbird") and community theater favorite Donald B. Bartalo. (Wednesday, September 21, 7 p.m.; Friday, September 23, 7 p.m. MuCCC. $10. All ages.)

Masque, an art form consisting of masked individuals performing a dance or skit, was a popular form of theatrical entertainment in late-16th and early-17th century Europe. This year's Fringe will feature a similar performance with "No More Words," a masque and physical storytelling show built around the vast theme of human experience. (Sunday, September 18, 6:30 p.m.; Wednesday, September 21, 8 p.m. Lyric Theater: Prince Street Chamber. $8-$10. All ages.)

This September marks 15 years since the 9/11 terror attacks, when 343 members of the New York City Fire Department sacrificed their lives to save others. At the time, "A Blue Sky Like No Other" writer-performer Steven Fetter was living in New York City. This tribute show — a Time Out NY critics' pick — uses slides, video, and original music to chronicle Fetter's journey from Wall Street to the West Coast following 9/11. (Sunday, September 18, 1:30 p.m.; Monday, September 19, 6:30 p.m.; and Tuesday, September 20, 6:30 p.m. RAPA @ SOTA: Ensemble Theatre. $10. Appropriate for ages 13 and over.)