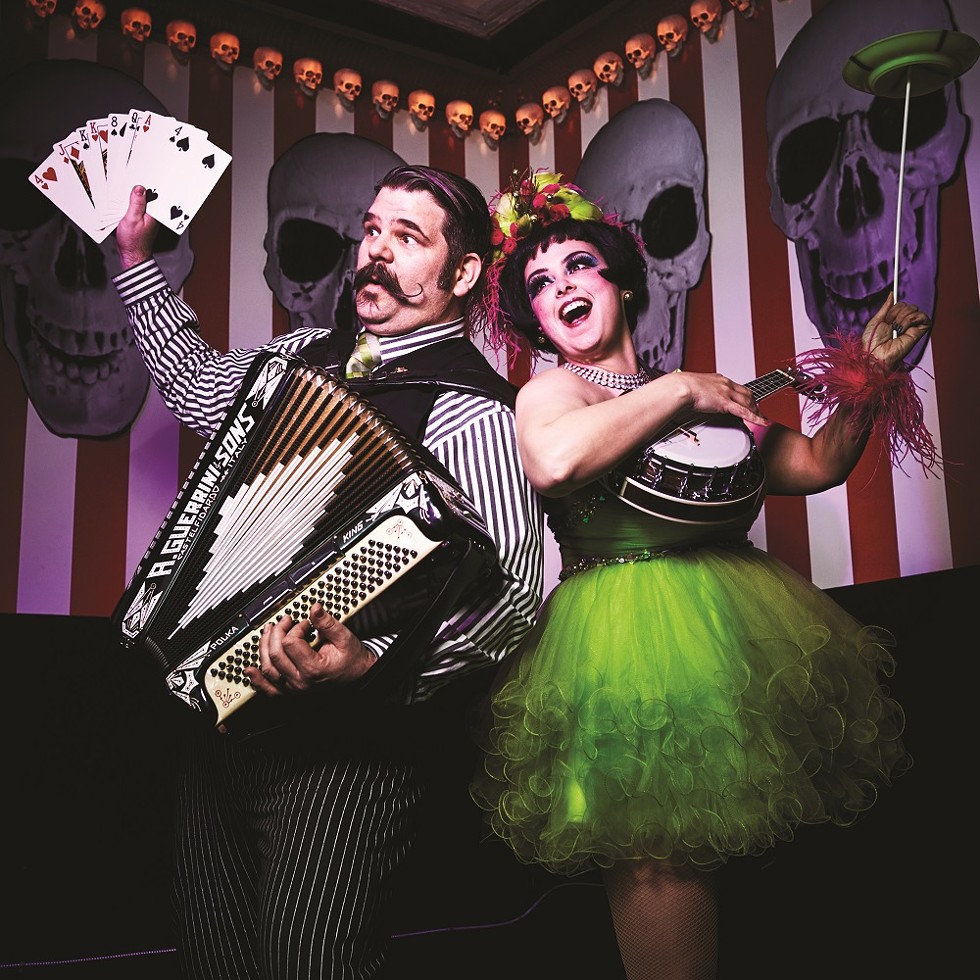 I like funky bands who don't really push the funk onto listeners. Bands like Rochester's Hard Logic lets the funk be its guide. Same goes for the way the band handles fusion. It expertly marries what's there instead of heaping shovelfuls of too much in the mix. Funky enough to listen to, fusion enough to challenge, cool enough to captivate. (Thursday, September 14, 7 p.m.; Thursday, September 21, 9 p.m. Lyric Theatre: Main Stage. $8. Appropriate for ages 13 and older.)

Torment, monomania, madness, obsession; these are a few of Poe's favorite things. Shriek and ponder, weak and weary, as the masked members of On the Edge Drama Troupe drag you into Edgar Allan Poe's fevered brain by way of interpretive pantomime and masque. (Thursday, September 14, 9 p.m.; Thursday, September 21, 6 p.m. School of the Arts: Black Box Theatre. $10. Appropriate for ages 13 and older.)

In its sixth Fringe appearance, Rochester's globally revered PUSH Physical Theatre will present a yet-to-be performed portion of "Dracula," the company's upcoming production debuting this Halloween at Blackfriars Theatre, as well as selections highlighting the company's dexterous, gravity-defying discipline. It's not exactly dance; it isn't contortion. Known as motion theater, it's the symbiosis of bodies with a shared message. It'll change the way you look at movement and the use of the whole body in storytelling. It'll change the way you look at gravity. (Saturday, September 16, 8 p.m.; Sunday, September 17, 3 p.m.; Friday, September 22, 7:30 p.m.; Saturday, September 23, 4:30 p.m. School of the Arts: Allen Main Stage. $18. Appropriate for all ages.)

Through years of work and research as the guy who asks you to pull his finger, I've come to this conclusion: the louder the groan, the better the joke. You see, those groans aren't disgust, they're the envy of someone who wished they had said it first. Pinch and Squeal is a duo that has mastered the art of flirting with bad taste and vintage buffoonery. It's Penn and Teller meets Burns and Allen. The laughter of the vulgar and the vindicated — and the groans of the oppressed — shall ring out during this vaudeville-style show. (Thursday, September 14, 9:30 p.m.; Saturday, September 16, 4 p.m. School of the Arts: Allen Main Stage. $18. Appropriate for ages 18 and older.)

Starring Rochester Institute of Technology's slam poetry collective, Mental Graffiti, this show is far from the mere poet dishing out musings and ramblings from a tattered notebook. This is much more immediate, urgent, and aggressive. And it doesn't always rhyme on time for a lime dime, either. (Friday, September 15, 6 p.m. The Little: Theatre 1. Free. Appropriate for ages 18 and older.)

"The Black Bird of Death"

I'm not entirely sure if The Mystery Company is making a sly reference to "The Maltese Falcon" with the title of its Fringe production. That will be determined along with the more pressing who dunnit in this interactive production that speaks to the armchair detective in us all. It's the stuff that dreams are made of. (Friday, September 15, 8 p.m.; Saturday, September 23, 5 p.m. MuCCC. $15. Appropriate for ages 13 and older.)

Call it a convergence of interpretations. While working his voice around with a loop pedal, Rochester musician Seth Faergolzia will work his paintbrush across the canvas. Will the voice interpret the painting, or will the painting mimic what he hears? Let's all find out together. (Saturday, September 16, 4 p.m.; Thursday, September 21, 6 p.m. TheatreROCS Stage at Abilene. $10. Mature audiences.)