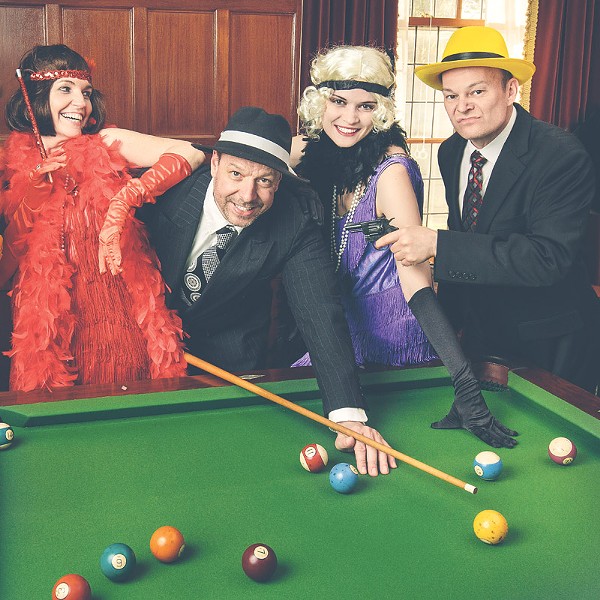 Set in 1920's Chicago and overflowing with hot music, gin mills, and gangsters, the audience is invited in to help Dick Tracey solve a murder — or add to the confusion. This is classic fun with the era starring as a character itself, interspersed with language and style that is beautifully antiquated, but still relevant today. It's on the level, see? (Saturday, September 17, 9 p.m.; Sunday, September 18, 6 p.m.; Friday, September 23, 8 p.m. RAPA @ SOTA: Black Box Theatre. $12. Appropriate for ages 13 and over.)

Norristown, Pennsylvania's resident vaudevillian, Douglas Stafford, plays it safe as a popular juggler-magician-comedian working for yucks from children and families. However this particular show has Stafford performing stunts based on bad ideas, like juggling fire or performing with a mouthful of needles. Not for the faint of heart ... or brain. (Friday, September 16; Thursday, September 22; Friday, September 23; 8 p.m. each night. RAPA @ SOTA: The DS Comedy Club. $16. Appropriate for ages 18 and over.)

"East of the Sun, West of the Moon"

This beautiful show will wash over the audience with the winds and magic of ancient Norway. Using layered vocals and physical sounds, Didrik Söderström weaves story, song, and poetry into an immersive experience based on a Nordic fairy tale. (Thursday, September 15, 10 p.m.; Saturday, September 17, 10 p.m.; Sunday, September 18, 5 p.m. Writers & Books. $11. Appropriate for ages 5 and over.)

People are simply dying to see the Chanson String Trio (two violins and a double bass) as it interprets classical pieces centered around the big adios. The group defiantly addresses pieces composed by Ravel ("Pavane for a Dead Princess"), Saint-Saens ("Danse Macabre"), Mussorgsky ("Night on Bald Mountain"), and Barber (Adagio for strings). The feel good show of the Fringe. (Friday, September 16, 6 p.m. TheatreROCS Stage: Main Stage. $10. Appropriate for ages 5 and over.)

Possibly the only senior improv troupe in the United States, Left for Dead Improv boasts more than four centuries of combined experience. As its moniker suggests, this blue-haired group is steeped in self-deprecating humor and theatrical talent. Age ain't nothn' but a number. (Friday, September 16, 8 p.m.; Saturday, September 17, 4 p.m. Writers & Books. $8. Appropriate for ages 18 and over.)

Women are funnier than men — they need that sense of humor to deal with male shenanigans. As proof, just dig the characters (Dresden Engle, Andrea Holland, Norma Holland, Allison Roberts, and Freyda Schneider) that play the characters who will have you laughing milk, or beer, out of your nose with their clever sketch comedy. Don't forget to bring napkins. (Friday, September 16, 9 p.m.; Saturday, September 17, 5 p.m.; Friday, September 23, 7 p.m. Blackfriars Theatre. $16. Appropriate for ages 13 and over.)

Music that possesses an electronic component can still be organic; it's just rooted on the receiving end as opposed to the launch site. Let's simplify: Although it has a synthetic root, electronic music still gets human (organic) asses in motion. Call it dance music. Just call it music. Better yet, call KOPPS. Formed in 2010, the band's irresistible sound is a powerhouse throb that transcends its collision of electronic and non-electric instruments. (Friday, September 16, 9:25 p.m. Parcel 5; part of Friday on the Fringe. Free. All ages.)