Crime at the museum 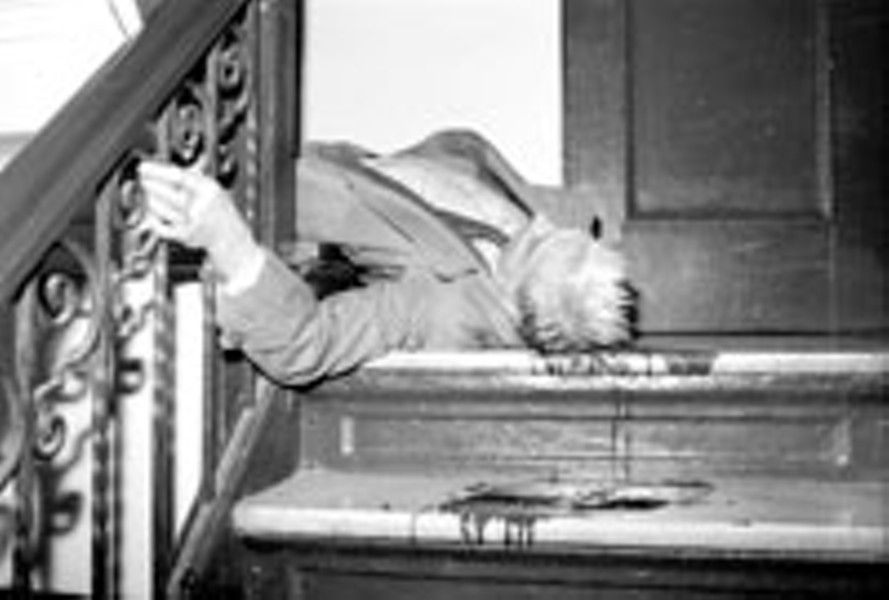 Photo by Jessica Burstein As familiar as an old shoe: Vaya Con Dios from Law & Order.

As you approach the entrance to the gallery, you can hear Law & Order: Crimes Scenes before you can see anything. It is only after you enter the gallery from the hallway that you immediately encounter six television screens, each continuously playing and replaying the teasers for six different episodes.

A couple walks down the street, arguing about something. Shots ring out. A car screeches. The couple ducks. They get up and look around to discover a dead woman lying on the street. Cut to Jerry Orbach as Detective Lenny Brisco and his partner asking the questions and investigating the scene. And then we hear it again: the familiar theme, followed by opening credits and then the commercial.

This is good television and a good-looking exhibition comprised of more than 30 black-and-white photographs from the set of Law & Order. Only, these aren't your typical, or even real, crime scenes, and many of the photographed "scenes" include the cameraperson and the crew in charge of creating the drama.

The photographs are the work of Jessica Burstein, who began her photography career in 1974 as an assistant to photographer Bert Stern. Later that year, Burstein became the first female staff photographer for NBC. She is now the official photographer for Wolf Films, the brainchild of Dick Wolf, creator of Law & Order.

It's really interesting how (and when) Burstein's name figures in this exhibition. The title of the exhibition doesn't include her name, and in the book that accompanies the exhibition, the name "Dick Wolf" appears prominently on the cover and in a much larger font than what follows, "Photographs by Jessica Burstein." It's also interesting that the book is essentially the work of Burstein but gives credit to Wolf, who approved her independent project.

Along with the photographs and TV screens, there are also display cases that contain actual props: a bloody leg, fake blood, the actors' ID badges, marked-up scripts... But, again, it's Burstein's photographs that make an impression. Are they "fine art" photographs? The question is probably irrelevant but is quite often asked just the same when the work of any individual hangs on the walls of a museum. These are really just photographs on the edge of art, documentation, and history --- nothing weird nor jarring. If anything, they're kind of nostalgic because they remind us of something familiar, something comfortable, like an old shoe. That's what TV reruns are all about.

The photographs represent an interesting mix from the history of photography. Burstein's decision to use black and white and, of course, New York City as a backdrop, is reminiscent of the work of Weegee (Arthur Felig), a freelance newspaper photographer in the 1930s and '40s who pursued sensationalist news stories and photographed scenes of violence and death. Yet, while Weegee's photographs were taken quickly amidst the commotion of a real crime scene, Burstein is in the presence of stylists and makeup artists. This connects these photographs to the glamorous world of fashion, a place where everything is set up and a scene can take hours to shoot.

Burstein's photographs are great documents of the Law & Order show, which is as it should be, since all photography documents something. Whichever it is, street, crime, fashion, or art photography, the photographs of Burstein are intriguing and striking. In the end, they ask us, "Why are we looking?"