Creatives in the cold

The weather's a drag. Artists share how they beat the winter blues

A Rochester winter is unrelenting. The cold becomes oppressive, and the snow often falls with a persistence that can be maddening.

No one is immune to the itch to check out until the sun returns. For their parts, artists must fight the urge to power down for the season, and instead keep the creativity flowing. CITY caught up with eight artists in various disciplines to find out how they make it through this time of year.

Winter survival plan: "Remaining creatively active starts with self-care, especially when it's cold. Eating well, sleeping enough, light exercise, these are things that keep me going when the sun departs. Aside from that, taking in good books and music is important. It helps keep me thoughtful and inspired." Lamaar's current inspiration includes the poetry collection "I Am the Darker Brother," a set of essays called "The Rhetoric of Black Power," and the music of Chick Corea, Yusef Lateef, and John Coltrane.

Upcoming projects: Lamaar in March will release a live album with his hip-hop-jazz quintet Claude Bennington's Fever Dream, as a well as a solo hip-hop album called "Letters."

Winter survival plan: "Since most of my warmer months are spent painting outdoors, which is often physically and mentally taxing, I actually enjoy the shift in the colder months to studio and interior work. While I miss using spray paint, I find calm in the slower pace of my acrylic and wood-burned paintings. There is also something incredibly enchanting about snowy days in the studio — it seems to dampen the noise of the outside world and allows me much needed space to be present within my work."

Upcoming projects: Rutherford's forthcoming mural, "I Am Here for You" at Strong Memorial Hospital's cafeteria, Café 601, will be finished in the late spring. Rutherford's epic mural series "Her Voice Carries"— featured throughout the city and at Memorial Art Gallery — continues to progress.

Winter survival plan: "Showing up to rehearsal every morning under layers of workout clothes, extra socks, hoodies, hats, and sometime gloves is no fun. We all look like sad, tired little puffballs. But then you get moving, your joints begin to thaw. You start to sweat a little, maybe shed a layer or two and, before you know it, you're feeling like working. It's the preparation that no one really sees. Then in the spring we emerge, like muscular butterflies from our winter cocoons."

Upcoming projects: PUSH Physical Theatre on Friday, February 23, will collaborate on a premiere with the Ying Quartet and vocalist Jonathan Rhodes for the 80th Anniversary of the Landmark Society at Hochstein Performance Hall. And on Friday, April 13, and Saturday, April 14, PUSH will join conductor Jeff Tyzik and the Rochester Philharmonic Orchestra at Eastman Theatre's Kodak Hall.

Winter survival plan: "I enter this new cold year by challenging myself to extend beyond my comfort zone. I already wear many hats as a parent, activist, poet, curator, and venue owner. So I'm focusing now on creating multi-media works that incorporate my theatrical training with my love of cinema."

Upcoming projects: McKibbens recently released a new collection of poetry entitled "blud." She and Emily Kahn-Sheahan are also putting together a monthly variety show at The Spirit Room called The Bad Feminist Killjoys, which will spotlight female, femme, non-binary, and transgender artists.

Winter survival plan: "By the second week of real winter, cabin fever comes to a head, and people decide that life is going to go on, and in true Rochester fashion, we just get on with it...I try to use it as a time to connect to what I found compelling about this life in the first place. I think it is fundamentally human to gather together, to light a fire against the dark, to tell stories."

Upcoming projects: Rakovan is looking to host more performances at The Spirit Room by blues and jazz artists and storytellers. He will be performing more of his long-form poetry in the future. Expect more whiskey-based drinks from behind The Spirit Room's bar.

Winter survival plan: "Though I don't enjoy or embrace the cold, I have learned to look forward to the time it gives me to process. In the warm weather I don't feel bad about letting ideas marinate, as I know I will have plenty of time to sit around and think about music and writing when the cold comes."

Upcoming projects: Expect new songs from O'Brian in the spring, to be performed by his roots-soul band Thunder Body or Great Blue Herons, O'Brian's collaboration with the Thunder Body horn section. 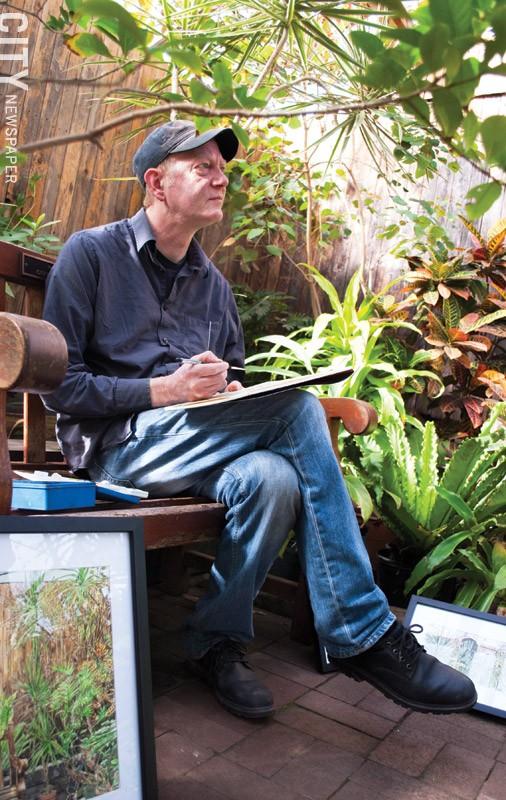 Winter survival plan: "I've gone on a few walkabouts with my camera in search of winter's beauty. They were primarily black and white photos, which brought into focus the harshness of winter we survive every year...The Lamberton Conservatory is a great salvation from the cold for me. I've done a few pen and ink watercolors there. It's a very peaceful and meditative place to sit and I lose track of time drawing and painting the wonders of plant life."

Upcoming projects: Lincoln will set to work on portraits next, and plein-air-landscape oil paintings will come in the spring.

Winter survival plan: "Reading has always been a way for me to recharge my creative batteries, especially when entrenched in cold weather. When I read a good collection of poems, one that rattles me in an unpredictable way, the kind of writing that has heat...I get this urge to write."

Upcoming projects: Be on the lookout for future poems about everything from issues of race to landscapes and low-brow MTV shows.

EDITOR'S NOTE: This article has been edited to correct the spelling of Emily Rose Kahn-Sheahan.