Bring on the happy hours with these creative summer cocktails

July 01, 2021
Lost during the summer of 2020 was the ability to meet friends at one of your favorite watering holes on a balmy evening and unwind together over a creative concoction.

Now that we’re bellying up to bars again, celebrating that simple pleasure and our city coming back to life, many bar managers have hit the ground running with summer menus featuring seriously delicious drinks.

Take Rufus Cocktail Lounge at The Mercantile on Main, for example. The bar is inside the food court in the Sibley Building across from “The Five” (the former gravel pit known as Parcel 5), but its ample sidewalk seating offers the perfect perch to check out the summer events scheduled for that new green space, or to just watch people playing frisbee or walking their dogs.

When you go, order the rum-based Ollie (Plantation rum, pineapple juice, honey, lemon, sugar-salt-cinnamon garnish), a sweet-tart variation on rum and pineapple with an unexpected kick of salt and cinnamon. The blend is the creation of Anthony Rouhana, the bar manager at Rufus and The Cub Room, and is named for the skateboarding trick in which the rider kicks the tail while jumping to make the board pop into the air.

“It’s a subtle difference, but that cinnamon-sugar-salt rim just kind of elevates you,” Rouhana says.

His idea of a refreshing summer cocktail is one with a little spice to offset the sweet, such as the signature daiquiris he makes upon request with fresh strawberries, local honey, and jalapeños.

Just a few blocks away is Native Eatery & Bar, which offers ideal environments for dining and drinking on a good-weather day. Its patio offers wonderful views of Washington Square Park and the activity around Geva Theatre Center. But if you can’t snag a seat there on a nice day, the staff will open the enormous glass doors to the patio to let in the light and air outside.

Pineapple is a summer trend on cocktail menus around town, and appears in a few of Native’s current drinks. The mezcal-based Pineapple Express (Madre mezcal, aperol, tepache, charred pineapple, ginger, lemon, house-made grenadine) hit the spot on a recent hot evening with its smoky-sweet taste of the tropics, as scraps of cheerful conversation floated by on the breeze.

Bar Bantam, located in the lobby of The Metropolitan, is another super downtown spot with a good patio. If you enjoy whiskey, try its aptly-named Lawnchair Pilot (bourbon, lemon, aperol, averna). Served chilled and “up,” its notes of citrus and caramel make this drink easy and floaty, like its namesake Larry Walter’s patio-chair-and-helium-balloon flight.

Over in the East End, The Daily Refresher has cozy couches and small-group seating for a more intimate night out, and has a cool view of downtown on the second-story patio out back.

Of the Daily’s current cocktails, the Ruby Splash (gin, Lillet, aperol, elderflower, lemon juice, soda, cuke & rosemary) is a spring menu item that’s going to be carried over into the summer. Lucky you, because this one is a beaut — the intense citrus of the aperol and lemon juice complement but don’t overpower the heady herbal notes of the gin, elderflower, and rosemary. A cucumber garnish wraps all of your senses with a cool, fresh feeling.

Farther out from the downtown core, but no less idyllic for people-watching, is Velvet Belly, the newest addition to the restaurants at the Rochester Public Market. In the past several years, the Public Market district has seen an explosion in businesses, including several spots to grab dinner and drinks inside and surrounding the market gates. You can effectively bar-hop just hitting the few joints along Railroad Street and Public Market Way.

Velvet Belly, which opened in early June, offers global coastal cuisine and an ebullient drink menu. Bar manager Becca Pesce has a penchant for introducing ingredients from the kitchen into her cocktails.

For example, VB’s spicy margarita, the Shark Bait, contains a syrup that Pesce infused with togarashi, a Japanese spice blend (chili, ginger, orange peel, sesame, seaweed), that is used in the food and gives the Shark Bait an umami bite. 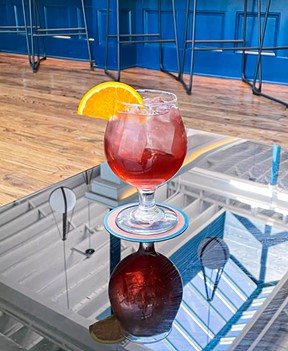 On an herbal kick, I was drawn to the Garden Party (rosé sangria, bergamot, hard seltzer). This was daring for me — I’ve never been a fan of sangria, which I’ve always regarded as fruit salad doused in chilled wine.

But Pesce may have converted me. The rosé base has a delightfully complex depth to its flavors, blending the wine with cognac and bergamot liqueur, as well as Katboocha’s Tiki Rosé kombucha. And there are no soggy berries clogging up the glass, only an elegant orange slice balanced primly on the rim. Capped with H2Roads’ hard seltzer to give it a little fizz and the scent and flavor of raspberries, the drink is an absolute delight.

Pesce says she tries to have something for everyone on the cocktail menu. That doesn’t just mean offering a wide variety of drinks, but also being conscious of allergies, and not leaning too heavily on grapefruit — which can interfere with medications — in her recipes.

“How can there be options that everyone feels comfortable ordering? That’s something I feel pretty passionate about,” Pesce says. “There can be several reasons why someone can choose to not drink alcohol — it’s none of my business.”

What is her business is being inclusive for her clients, whether they’re the designated driver, on the wagon, or entertaining children with adventurous palates.

“We're finally rounding the corner of a very, very difficult year,” Pesce says. “And it's been so awesome seeing everybody come out and having cocktails that are a celebration, that look good, that taste good. I think that's something that people are looking forward to, you know — celebrating and feeling like humans again, being out and about and feeling good about it.”