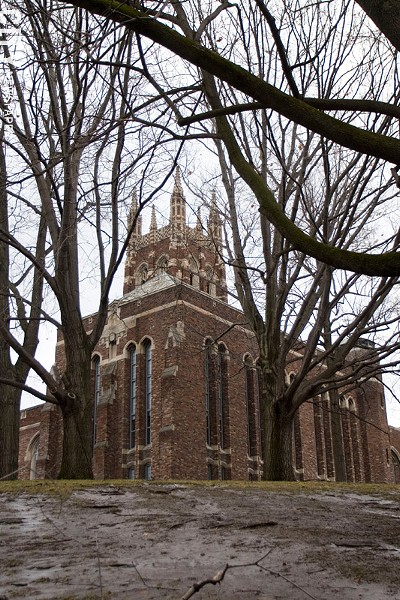 At a special joint hearing last week of the city's Preservation Board and Planning Commission, Thomas McDade Clay, vice president of institutional advancement at Colgate Rochester Crozer Divinity School, pleaded with members for more time – and he got it. McDade Clay asked members of the two boards to delay their vote on whether CRCDS should be designated a city landmark until CRCDS's board of trustees, and the property's buyer, Top Capital of New York, could fully understand the implications of the designation and negotiate some parameters.

A compromise was already in the works shortly before the meeting. Top Capital had agreed to scrap earlier plans to build a new facility for the divinity school at the southern end of the campus near Highland Avenue and South Goodman Street. The company proposed instead to build CRCDS's new building on the northeast side of the campus.

But that site is currently occupied by two dorms – Saunders House and Andrews House – and a parking lot. Top Capital and CRCDS are asking that the landmark status not apply to that portion of the campus. The buildings are not as historically significant as the others on the campus, and landmark designation might delay construction of the new school, McDade Clay told board members.

Wayne Goodman, director of the Landmark Society of Western New York, said in a written statement that he supported delaying the vote as well CRCDS's request to exclude the two buildings.

But the push for landmark status has added a wrinkle to the school's sale of its scenic campus. At last week's Preservation Board-Planning Commission meeting, more than a dozen neighborhood leaders and residents spoke strongly in support of landmark status for all of the CRCDS campus. Marie Via, who filed the landmark application, described the campus as one of the most significant architectural sites in the city.

One Preservation Board member challenged Via, asking why, if it is so important, landmark status wasn't pursued before. And McDade Clay expressed concern that Top Capital might walk away from the deal if it becomes too cumbersome. CRCDS doesn't have funds to maintain the aging campus, he said.

The Preservation Board's next meeting will be Wednesday, September 6, at which time a vote on landmark status is expected.