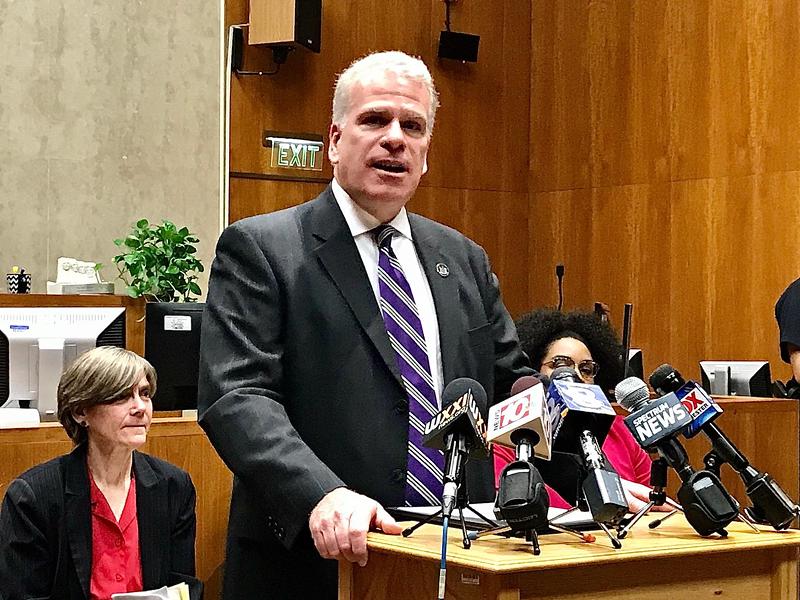 In his statement, Doran apologized for his behavior and said he was stepping down in accordance with the state’s chief judge’s “zero tolerance policy on matters of racial bias and insensitivity.”

“I did not comprehend at the time the hurtful nature of my actions,” Doran said. “I know now that an act of this nature is considered to be racist. I can assure you that this event in 1988 in no way reflects my beliefs and principles.”

It was not immediately clear where the photo had surfaced and was circulating, or as whom Doran was masquerading at the time the picture was taken.

“I ask for forgiveness from these who have been hurt by this, those I may have embarrassed, and from the people who have taken time in their lives to educate me about the hurt my actions caused," Doran said.

The state's chief administrative judge, Lawrence Marks, released a statement saying that the process for choosing Doran's successor would begin soon, and that state Supreme Court Justice William Taylor will serve as acting administrative judge in the interim.

Taylor was formerly the lawyer for Monroe County and was a town justice for Pittsford.

Doran, who was elected to a 10-year term in 2015, said he will remain a judge and will work with the state to make the transition to a new administrator for Rochester as seamless as possible.

His resignation caught many people in legal and criminal justice circles by surprise, in part because of the efforts they said Doran took as an administrative judge to be inclusive when seeking advice about the court system and initiatives he undertook to bring about change.

The Monroe County Bar Association issued a statement condemning Doran's actions 33 years ago, but that also cautioned against judging him now based on his actions then.

"Judge Doran has been a champion of diversity within the bench and bar and has worked with the MCBA in its attempts to bring about real and substantive change," the statement read. "We can all condemn the actions of individuals without condemning the individuals themselves."

The Rochester Black Bar Association released a statement saying the organization was "disappointed" in Doran's racially-insensitive behavior, but added that it had worked with him on numerous initiatives to address racial inequities in the court system and issues facing attorneys of color.

"We hope that the legal community will use this time to reflect on the continued work to address racial biases and inequities in our legal community and system," the statement read.

A resident of Canandaigua in Ontario County, Doran has been presiding as a judge since being elected to the Ontario County Court bench in 1999. He was re-elected in 2009 and then ran for a state Supreme Court seat six years later.

He was appointed by the state to oversee family courts in the region in 2006, and was named the administrative judge of the Seventh Judicial District in 2011.

Local activists who have worked closely with Doran in the past on criminal justice matters issued statements in the judge's defense on Friday.

The Rev. Lewis Stewart, of United Christian Leadership Ministry, said he had worked with Doran on what he called "systemic change" around implicit bias in the court system, including developing strategies to diversify jury pools.

"I can say unequivocally that Judge Doran is not a racist," Stewart said. "Many of us are not who we were over 33 years ago."

In particular, she said, he established a Community Justice Council, whose members advised him and court staff on their experiences and concerns about access to justice.

"He is our strongest ally in the court system, and has done more to address racism and inequality in our local courts than anyone else I know," Foster said.