Special Sections » A Year of Covid-19: Our Lost Year

COVID-19's toll on tenants: Falling behind and crossing fingers

March 01, 2021
The pandemic has been a massive public health concern, but it also set off a global economic crisis. As countless renters and homeowners across the country lost income or jobs, many were at risk of losing their homes.

Nobody knows exactly how many people are on the brink of eviction or foreclosure, though there’s consensus that a large portion of the population is at risk, particularly low-income households and people of color.

In the city of Rochester, landlords who own three or fewer properties reported that 44.4 percent of their apartment buildings had at least one unit in arrears, according to a landlord survey conducted for the city by a Bloomberg Harvard City Leadership Initiative researcher. Of the 2,289 landlords invited to participate in the survey, 10 percent responded. 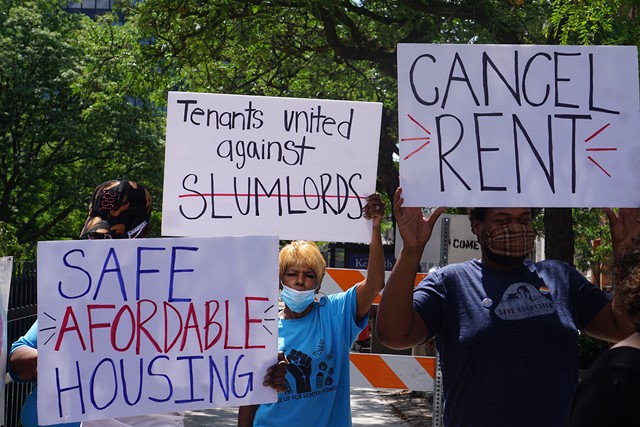 The researcher, Elijah de la Campa, estimated that citywide the amount of rent in arrears was between $3.2 million and $5.1 million.

“So many people are so far behind,” said Mark Muoio, program director for the Legal Aid Society of Rochester’s Housing Unit.

Muoio said that Rochester City Court currently has 855 eviction cases pending, most of which were filed between October and December. Not all of them are tenants who haven’t paid rent, which is a key distinction. State law prohibits evicting tenants who haven’t been able to make their rent due to pandemic-related hardships. Courts, however, can still issue money judgements for back rent in those cases.

But the pandemic’s strain on tenants, homeowners, and landlords is not a problem specific to Rochester.

The U.S. Census Bureau has conducted semi-weekly household surveys throughout the pandemic and it reported that 11 percent of New York households were, as of Feb. 1, either behind on rent or mortgage payments, or had little to no confidence that their households would make the next month’s payment on time.

Of the adults living in households that were behind on rent or mortgage payments, 29 percent said it was very or somewhat likely that they’d face eviction or foreclosure within the next two months.