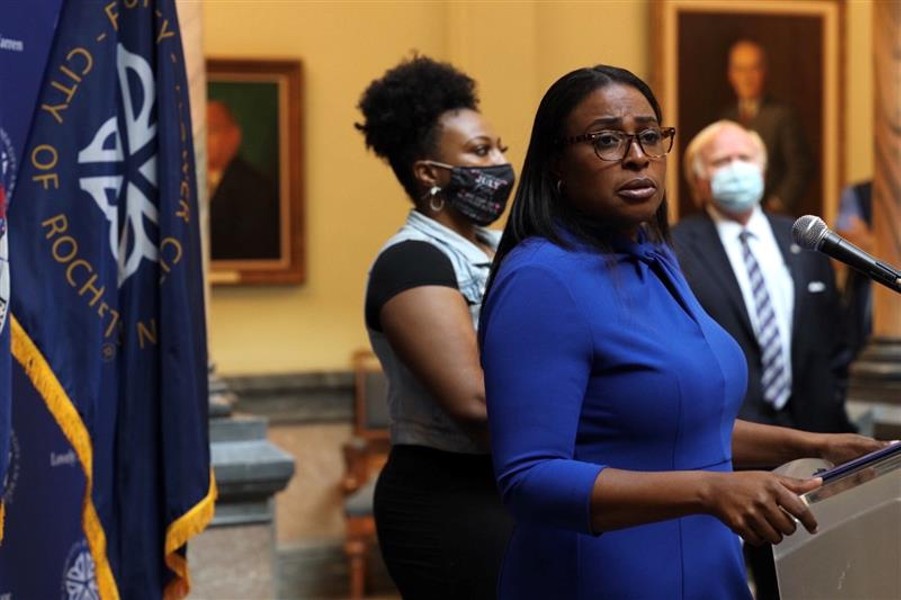 PHOTO BY MAX SCHULTE Mayor Lovely Warren addresses reporters during a City Hall news conference on Sept. 3, 2020.
A regional appellate court has denied a plea for a change of venue by lawyers representing Mayor Lovely Warren and two of her campaign associates in their criminal campaign finance case — setting the stage for a trial in Rochester.

Attorneys for the accused contended in court papers filed in November that media coverage of the charges against the mayor, and protests related to the Warren administration’s handling of the death of Daniel Prude in which demonstrators called for her resignation, ensured that she could not receive a fair trial in Monroe County.

“The publicity in this case has been substantially more prejudicial than that of other high-profile cases in the county,” the lawyers wrote in a motion seeking a change of venue dated Nov 23.

But a panel of five judges from the Rochester-based Appellate Division of the state Supreme Court found last week that the defendants had not met their burden of proof. In doing so, however, the court left open the possibility of the case being moved to a new jurisdiction if an impartial jury cannot be found in Monroe County.

“We conclude that defendants have not met their burden of demonstration that there is ‘reasonable cause to believe that a fair and impartial trial cannot be had’ in Monroe County,” the court wrote in a decision dated Jan. 13.

“It if develops during the voir dire (jury selection) that a fair and impartial jury cannot be drawn, an appropriate motion may then be made,” the decision concluded. “The relief requested in the motion is premature.”

Monroe County prosecutors opposed the request for a change of venue, arguing that fair trials have been held in other high-profile cases and that it would be a logistical burden considering that they planned to call as many as 50 witnesses.

Warren and her associates, Albert Jones Jr., the former treasurer of her Friends of Lovely Warren campaign committee, and Rosalind Brooks, the city’s finance director and the former treasurer of a political action committee crated by Warren called Warren for a Strong Rochester, have been indicted on felony charges connected to campaign finance violations alleged to have occurred during Warren’s 2017 re-election run.

The three of them face two charges, including illegal coordination between political committees for the purpose of evading donor limits and participating in a scheme to defraud in the first degree.

Warren's lawyer, Joe Damelio, said Tuesday that the mayor is confident she can get a fair trial in Rochester, but that he and the lawyers representing the other defendants felt it was best to attempt to move the trial.

"It just means we're going to have to work harder at the time of jury selection to find jurors who haven't heard anything about the case — and let's face it, in Monroe County everybody has — or very little and can sit on the case in a fair and impartial manner," Damelio said.

It is relatively rare for a court to grant a request for a change of venue, although it does happen on occasion.

In 2019, for instance, the appellate division found that former City Court Judge Leticia Astacio could not receive a fair trial in Monroe County on charges that she illegally tried to buy a shotgun in violation of her terms of probation stemming from a drunken driving conviction.

That case was moved to Onondaga County, where she was acquitted of the gun charges.