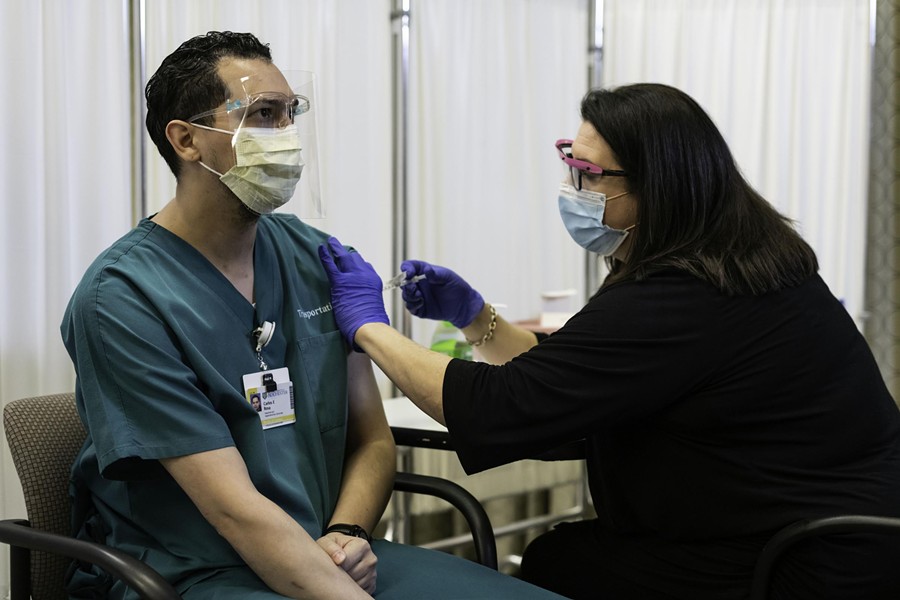 PHOTO PROVIDED BY URMC On Dec. 14, 2020, transportation worker Carlos Rosa was the first of 10 employees at the University of Rochester Medical Center to receive their first dose of the Pfizer-BioNTech COVID-19 vaccine.
County leaders in New York said Tuesday that their health departments have been developing vaccination plans for years and can help smooth the rocky rollout of the state’s coronavirus vaccination program, but they need more cooperation from Gov. Andrew Cuomo and his administration.

The county executives, in a news conference on Zoom, said their health departments are required by state law to have mass vaccination plans, and they have been updating them regularly with test runs of their systems and investment in staff training.

But they said Cuomo and the state health department are not providing data that they need and are leaving them out of key meetings — making it more difficult to coordinate the distribution of the vaccines in their communities when the doses arrive.

If the state uses the counties’ expertise, it will greatly speed up vaccinations, said Dutchess County Executive Marc Molinaro, the head of the bipartisan New York State County Executives Association.

“We have the plans in place,” Molinaro said. “Activating them, using them and implementing them is a logical step that is necessary across the state.”

Molinaro was the Republican candidate running against Cuomo in the 2018 governor’s race.

In December, Cuomo assigned hospitals the job of administering the initial doses of vaccines for frontline health care workers. He said the major hospital in each region would also be responsible for later stages of the vaccination program when more New Yorkers become eligible.

But more than three weeks after the first shipments arrived, less than half of the initial vaccine doses have been used, and many hospitals are falling far behind in vaccinating essential health care workers, the governor said on Monday.

Cuomo said hospitals that don’t use up their doses by the end of the week face fines, and he continued on Tuesday to threaten that underperforming hospitals won’t get any more vaccines in the future.

“Going forward, we’ll just distribute it to the hospitals that do a better job,” the governor said.

The county executives said the hospitals were never set up to carry out large vaccination plans, and that state officials should be working with the health care centers to try to work through the problems. Molinaro maintained that it’s not fair to penalize them for failing to do jobs that they aren’t prepared for.

“This philosophy that ‘the beatings will continue until morale improves’ is not an effective tool to getting the job done,” said Molinaro. “We can get the job done if we don’t have those obstacles placed in our way.”

For the first time on Tuesday, Cuomo laid out plans to have other entities besides hospitals administer vaccines. He said the vaccine will eventually be available at 3,762 sites, including private doctors’ offices, pharmacies, and urgent care clinics. Additionally, he said county health departments and community centers will also be included.

“We’ll be supplying all of these outlets with the vaccine, to do distribution, when we get to the general public,” Cuomo said.

Cuomo senior adviser Rich Azzopardi said in a statement that the state needs to take the lead and coordinate all of the county plans with the state response to keep all the counties from going in different directions.

Cuomo is also asking major labor unions, including police, firefighters, and teachers, to organize their own vaccination programs for their members.

Andy Pallotta, the president of the New York State United Teachers union, said they are “open” to working with the state to do that. He said they believe teachers should be given priority access to the vaccine.

In a briefing with reporters, the governor was asked how members of the public can sign up for the vaccine or prove that they are eligible for a shot when their turn comes. Cuomo said those details have not yet been worked out.

He said it will be at least another month before the state has enough doses for all of New York’s 2 million health care workers and can then move on to other groups.