In early December, before she leaves office, County Executive Cheryl Dinolfo is expected to sign into law legislation that will make it a crime to annoy, alarm, or threaten first responders, such as police officers, firefighters, and EMT's.

But Democratic legislators, who opposed the bill and spoke against it on the chamber's floor, continue to push back on the pending law.

Two of the legislators who have spoken out against the measure have extensive backgrounds in policing and firefighting. They warned that the pending law is vague to the point that it could be abused by law enforcement, and that it could set back hard-earned progress in police-community relations. They also said the measure and existing, similar state laws protecting first responders are redundant.

The unsigned law says that a person faces up to a year in jail, up to a $5,000 fine, or both, if "he or she intentionally engages in conduct ... that intends to annoy, alarm or threaten the personal safety of the police officer, peace officer or first responder." 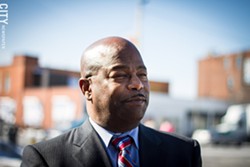 "You can't make it where an officer can arrest someone just because they're annoyed or alarmed," said Legislator James Sheppard, of Rochester, who retired as city police chief in 2013 after more than 30 years of service.

Sheppard said the law conflicts with a shift in training in many police departments that teaches officers to de-escalate tense situations instead of jumping to a punitive action such as arrest. He also said terms like "annoy" and "alarm" are so subjective that they're essentially meaningless.

"Even the courts have said it: police have to be more thick-skinned," Sheppard said.

Legislator Ernest Flagler-Mitchell sees serious problems with the law that will likely affect people in his district. He represents neighborhoods in northeast Rochester, where concentrated poverty persists and where the majority of residents are people of color.

If an officer is having a bad day, gets sufficiently annoyed at someone and arrests them, then there can be lasting consequences for that person, Flagler-Mitchell said. They may have to hire a lawyer and when someone is on a tight budget, that cost may cause them to fall behind on bills, he said.

Flagler-Mitchell also said that in his district, leaders and police officials have been working to build relationships and trust between residents and officers. But even one arrest under this new law could prove a setback in those efforts.

"That destroys the relationships," Flagler-Mitchell said and wondered how many people would be charged "before the higher courts throw this bill out."

Related What does it mean to harass police?: A proposed law would make harassing police and responders a crime, but it's vague.

What does it mean to harass police?
A proposed law would make harassing police and responders a crime, but it's vague.
By Jeremy Moule
News

Flagler-Mitchell retired from the Rochester Fire Department in 2017 after 20 years of service. He knew well that there were laws in place to protect firefighters if someone were to harass them.

Sheppard, too, said that there are already laws on the books that police officers can use if someone is interfering with their ability to do their jobs. They can charge people with obstruction of governmental administration, for example.

"It doesn't give law enforcement a new tool," Sheppard said.

State laws already make it a crime — in some cases a felony — to threaten or assault police officers.

Republican legislators Karla Boyce and Kara Halstead proposed the bill in October and it was introduced as a matter of urgency, so it skipped the typical committee vetting. The Republican majority pushed the measure through during the November 12 County Legislature meeting.

The law would take effect after Dinolfo signs it and it's filed with the New York Secretary of State.

On Monday, Democratic County Legislator Rachel Barnhart wrote Dinolfo asking her to consider her legacy and to decide against signing the "deeply flawed bill." In her letter, she echoed criticisms that the law could be abused by officers and "used as a tool of oppression, particularly in communities of color."