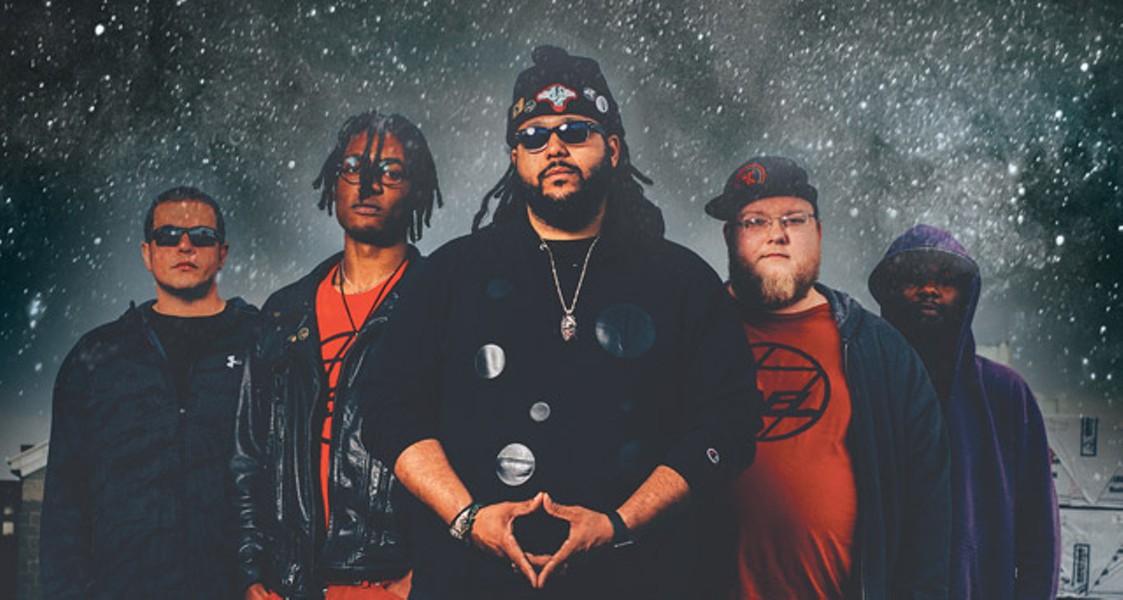 For more information, check out level7exp.com

The ButaPub (315 Gregory Street) residency continues through the summer. The next date is Friday, June 2, and will feature Hassaan Mackey, Moses Rockwell, Volatile, Golden, SMD, and Brawlic Bros. More shows on July 8, August 25, and September 23.

It took almost a decade, but the stars finally aligned for The Level 7 Experience

The Level 7 Experience was inevitable. Kind of like an epic tale of long-lost love, the band's five members spent almost 15 years circling one another until the stars aligned.

Separately, the musicians in The Level 7 Experience have been deeply tied to Rochester's jam band, reggae, and funk scenes and actively a part of helping create an ever-growing, tight-knit community of fans and bands. It has made the band and the hip-hop music it creates that more approachable.

Each month, The Level 7 Experience hosts a showcase at ButaPub where local emcees can join the band onstage in a freestyle cypher. It's the band's hope to create a holistic space for hip-hop artists, and together break away from the negative stigmas Rochester bar-owners and goers alike have for hip-hop shows.

Vocalist Grant "Skribe Da God" Atkins and drummer Aaron Hughes grew up together in Rochester and became roommates during college. Hughes was training to become a session drummer on the jazz circuit — he has since played alongside renowned artists like John Scofield and Maceo Parker. During that time, Atkins wasn't playing an instrument, but felt motivated creatively and had a growing admiration for Hughes's drumming. He inevitably picked up a Djembe, and together Atkins and Hughes started making reggae music. To this day, Atkins believes the core of his musical existence is rooted in their friendship.

In 2003, Atkins attended the Ultimate Breakdown Hip-Hop event for his first rap battle. Although he lost, he came away with a significant connection: Adam "DJ 2way" Ackerman, a beatmaker, was only 17 years old at the time and was excitedly watching from the crowd. He approached Atkins as he was getting off stage in hopes the two could work together.

Atkins and Ackerman immediately connected on what they call a "musical spiritual level" and started recording hip-hop together under the moniker Level 7. Hughes would occasionally sit in with the duo, but he eventually moved to New York City to pursue his own career in professional drumming. Before he left, though, Hughes coordinated a few musicians to sit in on Level 7 performances — when this happened, the group called itself Skunk's Monks.

Atkins had also joined Giant Panda Guerrilla Dub Squad in 2003 as a percussionist and vocalist. But in 2007, he made the difficult decision to leave the band and focus on his family and career as a history teacher in the Rochester City School District. Although he didn't have the time to devote himself to a group, he remained on the reggae circuit as an occasional featured artist with other Rochester bands.

Among those bands was roots-reggae outfit Mosaic Foundation, which took Atkins and Ackerman under its wing, and the two made a connection with keyboard player Ekwem Bogmis. As their friendship grew, the idea slowly formed to make music together outside of the reggae genre. Although it was ambiguous at that time, the point of focus for Level 7 was to expand on what they were doing with two turntables and a microphone and evolve into a full live sound.

Bogmis moved out of Rochester to Ithaca around 2014, then later moved out of country to South Korea. There he performed as B33T JUIC3, a one-man band creating loops with guitars, percussion, and vocals. Meanwhile, Atkins and Ackerman continued to dream of a full band. With no specific musician in mind to join them, they would have open jam sessions, but no one particularly stuck — so the vision wouldn't quite yet come to fruition. The belief was that it would happen ... just not yet. There needed to be patience to allow the universe to let things fall as they may.

Before bassist Dexter Redic joined what would eventually evolve from Level 7 to The Level 7 Experience, he would attend jam sessions with Atkins and Ackerman. But he was already committed to another Rochester band, RootsCollider. It was clear that everybody involved wanted to create something magical together, but they were all consciously following other passions.

In the summer of 2016, Atkins and Ackerman began collaborating with longtime friends Matt Schenk and Sean Driscoll, and they finally started to find that full band sound they were looking for when the guitar and bass were added. Drummer Aaron Hughes was back in town, too.

Just days into practicing together as a band, Bogmis came home from overseas, and everything really started falling into place. They all began jamming in Schenk's basement until that following fall: Schenk and Driscoll split off from the rest of the group, leaving the band with a void.

Just at that time, Dexter Redic found himself without a band — RootsCollider had also split. "I would call and call," Redic says, "until finally they let me come jam with them. I was looking for like-minded bandmates and to get all this stuff out of my head. I was going crazy."

When Redic joined, he didn't only fill the band's bass void, he personified the idea that it wasn't truly an experience until the right people came together. The decision was made that a guitar was no longer needed (it muddied up the sound they were going for). The stars finally aligned so fluently and naturally, it was almost cosmic.

The five began writing as a band with a truly prolific process that Atkins describes as "allowing the music to write itself by pulling sounds out of a large creative reservoir and see what fits." Each one of them is an artistic vessel with different influences and skills; without all their ideas brought forth, they couldn't build the unique sound they want. The band incorporates a Buddhist philosophy: let go of the ego; don't let the mind get in the way.

One Saturday night, in a basement somewhere in Rochester, I sat in on one of The Level 7 Experience's practices and witnessed the five musicians melt into one unified form. Taking in the practice was like listening to them have conversations through their music.

Atkins, sitting in a computer chair with his back to the band, trancedly spit rhymes he wrote for another beat created by Ackerman the night before. Meanwhile, Ackerman looped and sampled Sun Ra like a mad beat scientist with his Roland SP303 and Ableton Live. The song wasn't nearly finished, but to the untrained ear one wouldn't have guessed that. Bogmis laid down soulful keys effortlessly while Redic strategically came in heavy on the groove sounds. Each of their faces contorted to the music, staring into their own creative spaces. They vibrated off one another, like the music notes were charged atoms and in turn created a new, personal universe.

As they took a break from their practice, I posed a few questions to the nebula of talent and humbleness. An edited transcript of that conversation follows.

CITY: What does the "experience" mean in Level 7 Experience?

Adam Ackerman: The experience is the vibe with the crowd.

Grant Atkins: The mission and vision of the experience is to use our collective gift of wisdom and understanding we have acquired from our perspectives and fuse that. Use the art as a vehicle to pretty much code that artistic message and share it, or externalize it, and spread it. It's not just us — it's everybody who influenced us and supported us.

Dexter Redic: We also have been pulling a lot out of each other. Like, pulling moments of "This shit is awesome!" When you remove that ego from it, you get to enjoy it. If you can do that for a crowd, get them to feel like that — especially because we improvise a lot. We have set forms of songs before we play, where we will leave it open to see how we feel from the crowd.

Aaron Hughes: That's where the word "experience" comes from: if you can read the energy from the crowd.

So have you ever had a bad show experience then?

Ekwem Bogmis: Well, I've thought we had some pretty ill shows before, and Skribe will be like, "Nah, that show was no good."

Atkins: I feel like I am barely the toughest guy to please when it comes to how the show went.

Redic: I know I can't afford to go to as many shows as I see people going to — shows that I'm playing. I respect that, and I want to make it worth their time. I'm trying to heal them and myself. No show is a bad show.

You guys have a lot of reggae, jazz, and jam band backgrounds, which you can clearly hear in your music. How would you describe your sound?

Atkins: We call it party music. We take from the fun music, which includes reggae, hip-hop, psychedelic-funk rock. Those are the polarities we vibe between, but there are no limits.

Redic: [laughs] You listen and tell me what you think it is.

Are there any influences the band shares as a whole?

Atkins: I'm going to get really esoteric here: the influences are all meta. Frequencies, vibes, and trying to quantify the unseen, so to speak. So it's almost like fuckin' dark matter, you know? It's a conjuring. It's the traditional sense of music-making, where you're conjuring up a deity or spirit of sorts.

The influences go back to even Miles Davis. Miles wouldn't give musicians chart music — you just had a mode, a feeling, an idea. So that's kind of the influence there. But also, though, Fela Kuti, Wu-Tang, Sun Ra, Grateful Dead, Phish...

Ackerman: For me, MF Doom and Madlib. J Dilla, too.

What's in your near future? Do you guys have any goals with the band?

Atkins: We want to crystallize and record some music.

Okay, but do you guys want to be put on the map and eventually get signed with a record label?

Atkins: We want to spread this healing and love vibration to a more mass audience, of course. The focus right now: to stay true to the philosophy. To the desire to be more and more effective at transferring the light code. If our lumen level is only bright enough to fill a 100-person room, then that's what it is in that moment. The goal is to not have a goal but to love the process.

Hughes: I wouldn't say no to tour dates in a Winnebago. Sign me up!

How do you think you are contributing to Rochester's hip-hop scene?

Atkins: We are conscientiously doing it for the culture. What we are doing for the culture, the city, it's an inward and outward conscience movement.

Atkins: When I say "do it for the culture," it's not just the culture. It is culture as a larger idea, and that is to clearly express to different ways of life that we bring together, to make the sound. So breaking down stereotypes of what hip-hop culture is and enriching that at the same time. We actively break those down and build up the positive elements of it.

We are very specifically focused on and intentionally doing the Butapub hip-hop showcases monthly to bring artists together. That is what the culture of hip-hop is primarily. We're there expounding or pushing the boundaries of what those artists feel hip-hop is. By anchoring it every time, with our interpretation of the music. We are creating a safe, positive space.