Earth Day: Coronavirus clears the air in Rochester and beyond

Across the planet, COVID-19 is doing one thing to help people breathe easier: it’s curbing driving. People have been ordered to stay at home as much as possible and many of the places they’d drive to or take buses to have been temporarily shut down.

The dramatic decline in traffic has led to an equally dramatic decrease in nitrogen dioxide, a pollutant linked almost exclusively to fossil fuel combustion. Researchers have documented the likely link in China, Italy, and parts of the United States.

The trend is also playing out in greater Rochester, where state stay-at-home orders have thinned out traffic on area roads. 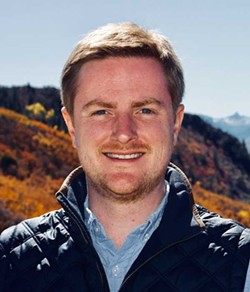 Lee Murray, an assistant professor of earth and environmental sciences at the University of Rochester, said the area’s nitrogen dioxide emissions in March were 40 percent lower than they were in March 2019, based on measurements taken by the European Space Agency’s TROPOMI satellite.

Nitrogen dioxide is “a really good local indicator of fossil fuel combustion and most of that is from gasoline burning,” Murray said. “The reason that we're seeing so much NO2 plummeting is because people are pretty much just not driving anywhere." 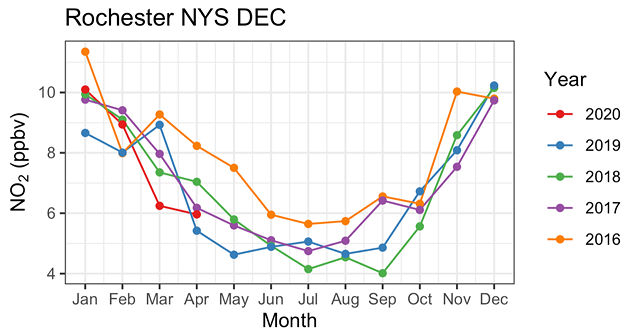 CITY separately compiled and reviewed publicly available data from the DEC’s station adjacent to I-490, which is used to get a picture of traffic-related pollution. From the start of March through April 20, the measurements trended significantly lower than readings from March and April 2019, as well as March and April 2018.

The state monitors nitrogen dioxide for several reasons. Among them: the gas is a precursor to smog, which can be particularly harmful to people with respiratory conditions such as asthma.

Rochester’s presently-lower nitrogen dioxide levels are consistent with measurements from other places.

Earlier this month, NASA posted on its website a report citing data from its Aura satellite for this past March that showed that nitrogen dioxide emissions were down 30 percent compared to 2015-2019 average for the month. The article noted that March “shows the lowest monthly atmospheric nitrogen dioxide levels” of any March since 2005, when NASA began using Aura to collect such data.

“As you would expect, the economy and pollution are intimately tied together,” said Philip Hopke, an adjunct professor in the University of Rochester’s Public Health Sciences department and a former chair of the Environmental Protection Agency’s Clean Air Scientific Advisory Committee.

Hopke noted that as the country emerged from the 2008 recession, it replaced coal-fired power plants with cheaper, more efficient, and comparably cleaner natural gas generation. As a whole, the country was also using less electricity. Combined, those two factors helped keep air pollution down, he said.

But experts say that no one should expect the present-day changes to last without additional intervention, since they are the byproduct of a temporary and extraordinary situation. Many scientists have also said that the coronavirus lockdowns are unlikely to have any long-term effects on climate change.