Through May 7 at Memorial Art Gallery, 500 University Avenue

The whole world right now is debating questions of globalism and nationalism, national identity, and how history impacts the present. Although these themes have a place in many Western political debates, focusing the discussions on southern African nations is not a common concept in the canon of Western art. But an important exhibit of work by Botswana-born artist Meleko Mokgosi, hosted in tandem at Memorial Art Gallery and Rochester Contemporary, gives Rochester audiences the opportunity to consider how ideas of national identity impact post-colonial nations on the opposite side of the world.

Mokgosi's monumental project, "Pax Kaffraria," tackles how ideas of national identity and measurements of success are rooted in colonial influence. Although African people are the subjects of his work, he presents ideas of African-ness as inextricably tied to the history of their conquest and subjugation by English, French, Dutch, and other colonial powers. His work combines visual allusions to rebellions against colonial rule, post-colonial relationships to power dynamics, and enduring economic-based systems of class.

Mokgosi's project is vast, both in its ambitious physical scope — the largest multi-canvas "chapter" in "Pax Kaffraria" is 14 feet tall by 45 feet wide — and in its complex allegorical framework. He explores the southern African post-colonial experience through mural-sized canvases, each presenting carefully selected imagery in an intentionally enigmatic, non-linear manner.

Seven of the project's eight multi-canvas chapters are exhibited in Rochester: one is installed along the long wall at Rochester Contemporary, along with several gorgeous, gargantuan after-study drawings; and six chapters fill the Memorial Art Gallery's Grand Gallery. This collaborative exhibit is the most complete showing of Mokgosi's project to date.

The exhibit's title is intentionally loaded with references to racism, subjugation, and Africa's long history of being carved up like a steak by Western imperialists. Provided information at the MAG states that the term "Kaffraria" was first used in the 18th century when the British established British Kaffraria, a settlement along the southeast coast of Africa where they forced the indigenous Xhosa people to live. "Kaffraria" comes from the Arabic word "kafir," meaning "infidel," which was used as a derogatory term that Dutch settlers in South Africa, or Afrikaners, used to refer to black South Africans. Its equivalent is the "n-word." 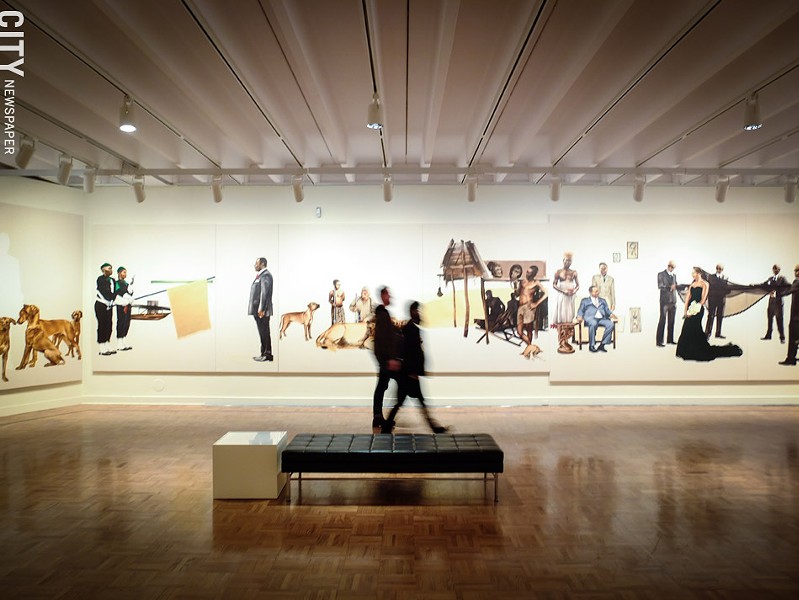 "Pax" — Latin for "peace" — is also loaded. When combined with "Kaffraria," it asks at what cost is peace bestowed or enforced? "Pax Kaffraria" refers to other similar uses, most famously, Pax Romana, which was the Roman Empire's period of relative peace that was achieved using oppressive tactics directed toward certain subjugated contingents of the empire.

"Pax Kaffraria" follows a previous project, "Pax Afrikaner," which Mokgosi says was his attempt to examine "the effects of xenophobia and national identification in southern Africa, and how this could be used to understand the rise of nationalism in numerous countries across Europe at the time."

Mokgosi — who is now based in Brooklyn — was born in Botswana in 1981, about 15 years after the nation won its independence and during a period of exceptional growth. MAG wall text states that due to Botswana's success, relative to most nations globally, it became a magnet for immigrants and refugees. Mokgosi was aware of the privileges of citizenship as a child, but later became critical of these ideas.

Through "Pax Afrikaner," Mokgosi questions how we can account for the perseverance of national identification in the age of globalization, "transnationality," and the so-called fluidity and multiplicity of identity formation. "Pax Kaffraria was a follow up and extension of this," he says.

At first glance, the project's chapters seem to form narratives, but they actually serve to deconstruct and even deny the West's obsession with a unilinear account of the evolution of civilizations. The beauty of his paintings draws the audience in, but the work demands a careful, attentive reading.

"He's a very theoretical thinker," says MAG Director Jonathan Binstock. Mokgosi is "interested in this idea that the past is always in the present, informing how the present unfolds over time chronologically. What happened in the past is providing a kind of structure for what's happening now. This idea animates the whole project in a way that there is no beginning or end to the story. This is the story, all at once."

Symbolically, this idea shows up in seemingly disparate imagery as Mokgosi blends historic and contemporary figures and events. For example, Mokgosi's chapter, "The Ruse of Disavowal," begins with white silhouettes of men: one man in a military uniform next to another in a suit with his fist raised. Instead of rendering these historic figures with white paint, Mokgosi has applied bleach to the raw cotton canvas, effectively creating a sense of whitewashing or absence.

"It's an image of independence from a colonial power, an African country that has asserted itself is either fighting for independence or has achieved it," Binstock says. "That's the vibe. If you go around to the end of this chapter, the last scene shows an empty government sitting room or office, and the pictures on the wall refer back to the liberators: the people who fought for the independence of the country, when the country was made independent from its colonial power."

The earliest anti-colonial event Mokgosi has included is the Xhosa Cattle Killings of 1856-57. It does not appear at the beginning of the installation but rather in Chapter IV, "Sikhuselo Sembumbulu," which is a Xhosa term meaning "Bulletproof."

"Prophesies led the Xhosa people to believe that by slaughtering their cattle and destroying their grain," wall text explains, "they could drive away invading colonial powers and simultaneously revive their ancestors back to flesh and blood. The slaughter would, in effect, make them bulletproof and initiate a new golden age."

Saturated in sepia, the central scene reads like a stark, held-breath aftermath, as the tribesmen stand over some of the 400,000 slain beasts — the sacrifice would result in the death of 40,000 Xhosa from starvation. There is an eerie familiarity between this appeal to ancestors and that of the Ghost Dancing Sioux at Wounded Knee. Both events ended tragically, with the further encroachment of the colonizers. And both events reverberated into the future, looked back upon as early examples of anti-colonial resistance.

Surrounding the Xhosa panel are modern scenes depicting the adopted influence that has transpired in the space between then and now: an African priest clutching a bible and a golden crucifix; a 19th century soldier in a Royal British uniform; a suited businessman relaxing at home; a fashionable couple in a ballroom; and a discussion between black and white politicians. 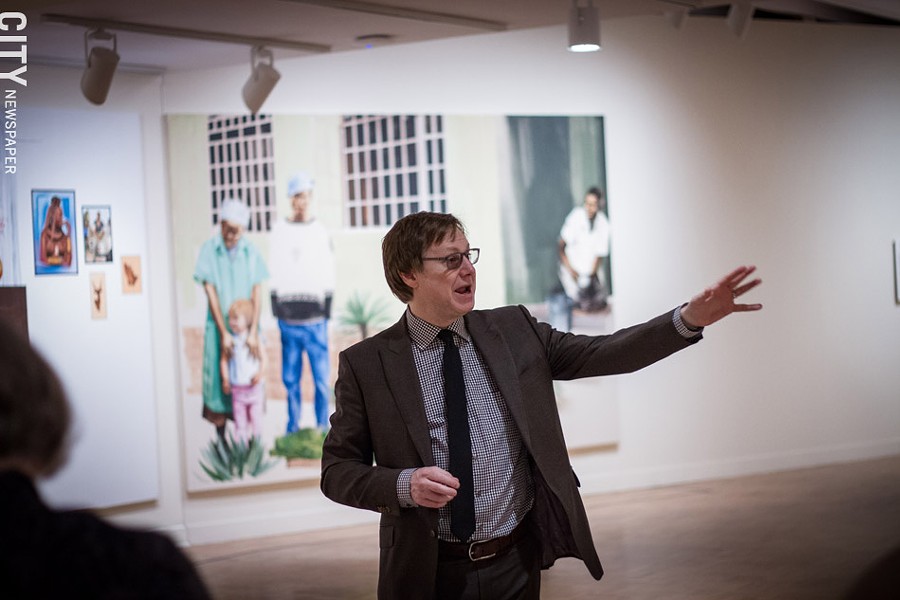 In his introductory essay, "Phantom History, Phantom Nation," for the book "Meleko Mokgosi's Pax Kaffraria," Binstock writes that these subjects would seem to be recognizable, even knowable, but "whatever clarity the parts have, the effort to draw connections between them is persistently undermined" by Mokgosi's juxtapositions and the fractured narratives that they imply.

The viewer is thwarted in the attempt to parse either a linear narrative or even an ultimate meaning of what is being seen. "'Pax Kaffraria' appeals through its literalness, its semblance of familiarity and promise of a totalizing history, but its brilliance is in its self-avowed and glorious failure to deliver," Binstock writes.

Mokgosi's work is grounded in classical painting, as evidenced by his expert depictions of figures and animals, but his subject matter is presented almost film-like. In his notes for the project, Mokgosi writes, "Although my work falls within the convention of painting, I borrow from cinematic techniques and tropes to construct all the frames and the installation as a whole."

His realism is mitigated with fragmentation; open space alludes to the passage of time between "scenes." He often stages his figures near rendered walls and furniture to give a sense of setting, but figures also float in empty space, or fade from detailed renderings into sketchy brushstrokes and charcoal lines.

With the absence of linear narration, we cannot merely fall back on the tired and hollow celebration of "progress"; we must instead acknowledge the myths and legends of triumph, but also closely examine how these ideas are incorporated into lived reality.

"History is constantly something that is being used in the present, to support a particular end, a political position or ambition or strategy," Binstock says. "It's relevant now, this whole issue of what is a nation, what is a national identity, what is an immigrant or what is patriotism, or nationalism — especially what is nationalism. All of these questions are important and they're always timely questions."

Chapter VI, "Fully Belly," is installed at Rochester Contemporary, along with several massive after-study drawings. Wall text refers viewers to the central scene, the coronation of a chief, in which traditional and contemporary elements are combined, "confusing, complicating, and perhaps even making fun of an event that confers exceptional power on an individual."

The work illustrates the absurdity to a scene like this, the kind of pomp surrounding it, says Bleu Cease, director of Rochester Contemporary.

And with that absurdity, there is perhaps a wariness of giving any single person that amount of power and deference.

"The image sets the stage for a narrative about how the idea of power permeates all aspects of life in many nations across Africa, from the highest ranks of government to village leadership, and at the level of the individual," wall text states. "Mokgosi includes a variety of figures with roles in the military, government, and industry, suggesting how people in powerful positions use state resources to secure the loyalty of others."

Cease says he is particularly interested in Mokgosi's use of animals, here represented in a variety of dog breeds and the Boer goat. "In talking with him about dogs specifically, he is really interested in humans' all-inclusive manufacture of this species, and different breeds having these loaded cultural uses," he says.