Conor Dwyer Reynolds: His job is to police the RPD

December 04, 2020
Beneath High Falls Garage on Commercial Street in a vacant ground-level office with trash piled in a corner, Conor Dwyer Reynolds pulled up a chair near one of a handful of unused wooden desks strewn about the place and made himself comfortable. 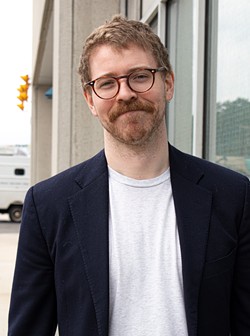 The City Council had a week earlier unanimously confirmed him as the executive director of the city’s new Police Accountability Board and the modest space was to be the board’s new home. The office didn’t look like much, but Reynolds saw in the board the most progressive tool in the nation for civilian oversight of policing.

“When I saw what this city was doing, I was pretty skeptical, to be honest,” Reynolds said. “A lot of what we see in cities is mandates that look nice, but don’t do much.
Then I had a chance to read the legislation, and I was just stunned.”

Reynolds, who is all of 30 years old, is a Rochester native and lawyer who previously co-led Yale Law School’s Environmental Protection Clinic and brims with youthful charisma. His spectacles and fastidiously trimmed mustache frame a friendly smile he flashes frequently.

He speaks with a conviction and deliberateness atypical for someone of his generation. Answers to tough questions are prefaced with a wave of his hand and the caveat, “Just so we’re clear,” a mannerism that recalls the president under whom he once worked. Reynolds was a communications strategist in the Obama White House.

But that was a lifetime ago, before Reynolds earned his law degree from Yale in 2017 and made his way south, where as a clerk for a federal judge in the Southern District of Mississippi he was exposed to matters of police accountability that would help prepare him for his latest role. His judge, Carlton Reeves, recently wrote an opinion calling to end qualified immunity for police that included a rundown of deaths of people of color at the hands of officers.

“When I was working in the federal courts, we saw a lot of officer misconduct cases,” Reynolds said. “But we also saw a lot of discrimination against officers within departments, whether women, people of color, Black officers. We were seeing how that trauma was happening to officers, and there was not, at least down in Mississippi, support from the unions, support from the administration. They were isolated.”

Reynolds holds fast to the idea that the Police Accountability Board, as envisioned by the city and overwhelmingly approved by voters last year, has the capacity to improve the lives of police officers and the city residents they police through a commitment to transparency in the officer discipline process. He also sees the board as an avenue for officers to bring concerns about policy and procedures.

It is here that Reynolds’ notions about the potential for the Police Accountability Board intersects with those of the board’s chair, Shani Wilson. A physician assistant at Trillium Health who has worked as an EMT, Wilson believes officer trauma perpetuates systemic racism in policing.

“There is a continuous perception of fear, that certain people do certain things in certain situations,” Wilson said. “That can contribute to post-traumatic stress and fatigue. That carries trauma, and that will affect their lives, and it will affect our lives.” 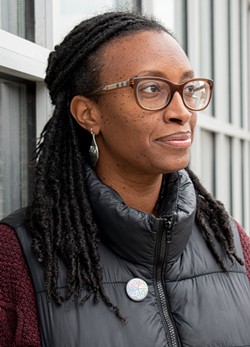 The Police Accountability Board was created to take a sweeping look at policing. Its powers were to include the ability to issue subpoenas, make operational recommendations to the Police Department, establish a “disciplinary matrix” to guide punishment when misconduct is found, and to discipline offending officers.

The latter has been embroiled in litigation for months. In May, state Supreme Court Justice John Ark ruled the board can neither discipline officers nor conduct hearings on disciplinary matters. His decision effectively rendered the board as toothless as the Civilian Review Board it was intended to replace. That board was limited to reviewing Internal Affairs investigations and making nonbinding recommendations on discipline.

The City Council has appealed Ark’s ruling, which was the result of litigation brought by the police union, the Rochester Police Locust Club. A decision on the appeal is expected next year.

Among the board’s most pressing matters is meeting Gov. Andrew Cuomo’s mandate to reinvent policing. Under that order, issued in June, every municipal police department in the state must submit a reform plan by April 1, or risk losing state funding.

The Police Accountability Board is one of four organizations providing input on the Rochester Police Department’s submission, alongside the Racial and Structural Equity Commission and United Christian Leadership Ministry.

While the board has been hobbled, its members have continued to work, including hiring Reynolds as executive director from a pool of more than 150 applicants.

His appointment was not without controversy, however. One former board member, Miquel Powell, called it “insane” that the board would hire Reynolds over qualified candidates of color, considering alleged victims of police misconduct are disproportionately non-white.

Wilson said Reynolds’ background made him an ideal candidate to get the board rolling, but acknowledged some concern with a white executive director taking direction from a board primarily made up of people of color.

“We chose him because he was the best person for the job, but we also needed to know that he could take direction from leadership who didn’t look like him,” Wilson said. “We’ve seen it all the time, and it’s not necessarily done that well. We needed to make sure it worked well, and we’re all very pleased.”

Reynolds has taken up racial justice matters before. He has studied and written extensively about exclusionary zoning, particularly in his native Penfield, and he was a lead author on a much-publicized research paper published over the summer that revealed how a wide range of private and public landowners in Monroe County placed restrictive covenants on property deeds in the early 20th century barring Black people from ownership.

He has caused his own stir, though. During his City Council confirmation hearing, Reynolds submitted a memo asserting the board’s independence from City Council. Councilmembers disagreed, arguing that the board was only sovereign of the Rochester Police Department.

Fully affirmed in his position, Reynolds chalked up the tumult to growing pains and pledged to foster communication between stakeholders in policing.