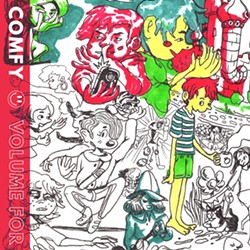 Comfy is the brainchild of one Connor Benincasa, an indie pop musician from Utica, by way of Philadelphia, who has since settled here in Rochester. Comfy’s new album “Volume For” — to be released Jan. 15 on Dadstache Records —could be considered Benincasa’s introductory “Hello” to the local music scene.

In that respect, “Volume For” is a welcome greeting, a 14-track salutation of intelligent, tightly arranged pop-rock songs with lyrics that might come across as painfully self-aware if the music wasn’t so damn catchy.

Benincasa has a brilliant ability to take simple, mundane observations and spin them into concise yet sprawling gems with nearly symphonic ambition and broader emotional import. It’s this compositional sensibility — reminiscent of The Magnetic Fields’ Stephin Merritt — that comes through clearly on each song and makes an indelible impression.

Recorded in Benincasa’s home and at Headroom Studios in Philadelphia, the album has the lo-fi energy and earnestness of a bedroom recording, but with better production values. While the recording consists of a rotating lineup of musicians, the contribution of Scoops Dardaris — who co-produced and mixed “Volume For,” in addition to playing bass on several tracks — deserves mention here.

From the jangly pop of “Everyday” to the grungy distortion of “The End,” Benincasa’s smooth facility with inventive melodies, active alt-rock chord progressions, and chamber pop flourishes makes “Volume For” music that’ll make you feel comfy.