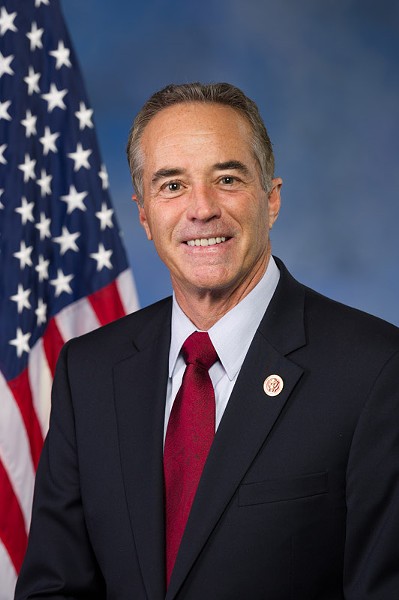 PROVIDED PHOTO Republican House Representative Chris Collins has been a support and ally of President Donald Trump.
[UPDATE]Republican Representative Chris Collins, who was arrested earlier this week on charges related to insider trading, has suspended his re-election campaign. Collins had initially said that he would continue to seek re-election to Congress. In his announcement this morning, he said that after discussions with family and friends, he had concluded that it was "in the best interests of the constituents of NY-27, the Republican Party and President Trump's agenda" for him to suspend the campaign.

Cameron Collins, Chris Collins' son, and Stephen Zarsky, the father of Cameron Collins's fiancee, were also arrested, reports the Buffalo News. Collins represents New York's 27th House District, which includes the Monroe County towns of Hamlin, Wheatland, Rush, and Mendon, as well as part of the town of Clarkson. It stretches across neighboring counties and over into Erie County.

For several years, Collins has been under scrutiny for his relationship with Innate Immunotheraputics Limited, an Australian biotechnology firm that was working on a drug to treat multiple sclerosis. He was the company's largest investor and sat on its board of directors, which gave him access to non-public information, according to a federal indictment released today.

The indictment, however, focuses on events that happened on or around June 2017.

Innate's promising multiple sclerosis drug treatment failed in trials. The indictment alleges that Collins shared information about the failed trials with his son, Cameron Collins, before it was made public, so that the younger Collins could make "timely trades" of Innate stock. The indictment alleges that Cameron Collins "traded on that information" and shared it with Zarsky, who it also accuses of making trades based on the tips and of sharing the information with others.

The trades allowed the three men to avoid more than $768,000 in losses "they would have otherwise incurred if they had sold their stock in Innate after the drug trial results became public," according to the indictment, which is attached at the end of this post.

The following statement from Collins' attorneys, Jonathan Barr and Jonathan New of Baker Hostetler, was posted on his House of Representatives website:

"We will answer the charges filed against Congressman Collins in Court and will mount a vigorous defense to clear his good name. It is notable that even the government does not allege that Congressman Collins traded a single share of Innate Therapeutics stock. We are confident he will be completely vindicated and exonerated.

"Congressman Collins will have more to say on this issue later today."

The Buffalo News has reported on past Congressional ethics investigations that also alleged Collins shared non-public information regarding Innate three times in 2015 and 2016, possibly in violation of a law that prohibits members of Congress from using privileged government information in stock trading.

That same report also says Collins met with National Institutes of Health officials in 2013 to try to secure a meeting between the agency and Innate's chief science officer to discuss clinical trials for the multiple sclerosis drug. The ethics investigations report framed the meeting as a potential violation of House ethics rules.

Collins, a vocal supporter of President Donald Trump,  is seeking reelection to his House seat and he faces a challenge from Grand Island Supervisor Nate McMurray.  The 27th District leans Republican and the odds have been with Collins. it's not at all clear how the federal charges will impact the race, though they could hurt Collins' chances or eventually lead him to resign.