FILE PHOTO Jackie Ortiz.
Monroe County legislators on Tuesday put off voting on a long-awaited measure to confirm the appointment of a county Democratic elections commissioner at the request of the party's leadership.

Assistant Minority Leader Ernest Flagler-Mitchell, a Democrat representing northeast and northwest portions of Rochester, asked that the measure to appoint Jackie Ortiz as the elections commissioner be pulled pending the outcome of litigation regarding the position.

The Legislature voted 20-to-9 to grant his request, with five Democrats, including the Minority Leader Vincent Felder, aligning with the body's 15 Republicans to table the legislation.

The development was the latest twist in an ongoing internal fight among county Democrats that has aggravated simmering tensions between two factions of the party — one whose members are largely loyal to Rochester Mayor Lovely Warren and another whose camp is a blend of mavericks and figures whose careers have been influenced by Representative Joe Morelle.

In a prepared statement announcing the development, Flagler-Mitchell cited what he purported to be a court order stemming from the litigation that he said precluded the Legislature from appointing an elections commissioner.

State Supreme Court Justice in May signed an order to show cause as to why he should bar legislators from making an appointment, but he subsequently ruled that the Monroe County Democratic Committee could hold a drive-in election to select a nominee to be the party's next elections commissioner.

That election was held in July and Ortiz won more than 85 percent of the weighted vote of 704 ballots that were cast, according to the committee.

Ortiz issued a statement on Tuesday calling the delay in her confirmation "unfortunate" and "devaluing" the voices of Democrats.

"Eighty-six percent of Democratic Committee members supported my candidacy and tonight's decision to delay my appointment signals the devaluing of such a vote," Ortiz said. "This delay tactic and undermining effort continues to push out the time frame for the people's work to get done."

The move was not entirely unexpected.

Many of the nine Democratic legislators who voted against pulling the appointment, have privately and publicly expressed reservations about the leadership of Felder and in recent days had wondered openly whether the confirmation of Ortiz would stall.

Ortiz, an at-large member of the City Council who has said she would step down upon taking her post as elections commissioner, would be the first Latinx to fill the job.

"We are deeply disappointed that 15 of our Republican colleagues and five of our Democratic colleagues in the county Legislature blocked the appointment of the Democratic commissioner for the Board of Elections," the nine legislators said in a joint statement. "Jackie Ortiz was overwhelmingly selected in a duly authorized vote of the members of the Monroe County Democratic Committee, and certification of that was submitted by the party chair to the president of the Legislature, as required by law."

Democratic legislators who joined Felder and Flager-Mitchell in voting with Republicans on the matter were Frank Keophatlasy, Sabrina LaMar, and Calvin Lee Jr.

Like most other boards of elections in New York, the one in Monroe County is overseen by co-commissioners — a Republican and a Democrat. There has not been a permanent Democratic commissioner since March, when the former commissioner, Colleen Anderson, stepped down to take a job in the administration of County Executive Adam Bello.

The duties of the job had been filled on an interim basis by LaShana Boose, the deputy Democratic commissioner who, as a result of the vacancy, was elevated to the post of acting commissioner.

The prospect of Boose holding the job permanently was met with mixed emotions by Democrats, with those in the orbit of Warren supporting Boose and those outside calling for an internal election among party members to fill the post.

The county Democratic Party did schedule an election after some wrangling, but it was ultimately delayed by the pandemic.

Then, in a move widely viewed as an attempt to consolidate power, Warren demanded that the county Legislature appoint a commissioner, a step that can be taken if the party does not select a nominee. Warren never publicly advocated for Boose, although she had endorsed Boose's candidacy in previous elections for city offices that were unsuccessful.

Felder, who did publicly support Boose, met Warren's demand and attempted to whip his party into making an appointment. But a lawsuit seeking an election ensued, and the court ordered the election. 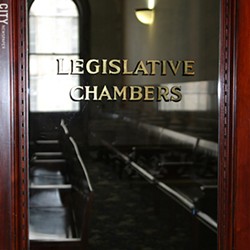 Republican legislators on Tuesday were eager to grant the request of Democratic legislative leaders to table the vote to appoint Ortiz, and their leader seemed to delight at taking a jab at Democrats' inability to unify over the matter.

"This evening, we chose to respect members of the Democratic caucus and support their objection to consideration of the appointment of Jackie Ortiz to the position of Democratic elections commissioner," Majority Leader Stephen Brew said in a statement.

"It is not the responsibility of the Republican legislative caucus to determine who will be confirmed as the Democratic Board of Elections commissioner, nor should we be put in the middle of this ongoing discussion," he went on. "The process in choosing a candidate for this position has been riddled with internal conflict from the Democratic party, as such we believe that it is best to allow appropriate time for a consensus to be reached within their party."