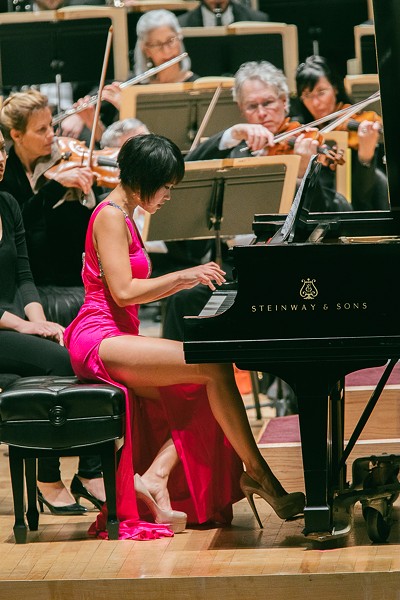 Every so often, a "game-changing" concert comes along. Not only was the Rochester Philharmonic Orchestra's Thursday program one such concert, but its brilliance was reprised on Saturday along with a pivotal performance from one of classical music's greatest active soloists.

Whether with hushed urgency or in bold and sultry tones, the orchestra's performance of Camille Saint-Saens' "Danse Bacchanale" (from the opera "Samson and Delilah") snuck up on the listener with a thrilling blend of power and beauty. The thoroughly nimble string section and its exquisite legato phrasing was impressive.

In Sergei Rachmaninoff's "Symphonic Dances," Music Director Ward Stare and the ensemble exhibited such clarity of tone, unanimity of expression, and seamless blend of textures, that the performance was close to flawless. This commanding tour-de-force featured as comfortable a chemistry as I've ever heard among the RPO musicians. In the three years I've covered this orchestra, this is the absolute best it's ever sounded.

In nearly any other set of performances, the orchestra would have been the story. And yet this was the week that Chinese pianist Yuja Wang made her Rochester debut, playing Bartok's Piano Concertos Nos. 1 and 3 for the first time in her career. Wang is an undeniable international sensation.

On Thursday, the moments leading up to Yuja Wang's emergence from the wings lagged under the weight of anticipation. Expectations were high, and questions hung in the air. Would Wang and Stare have a natural rapport and chemistry? Would the orchestra feed off of the famous young pianist's energy and intensity? But one question loomed the largest: What would Wang's take on the Bartok concertos sound like?

Composed in 1926, Bartok's Piano Concerto No. 1 is still savage and modern. Unabashed in its exploration of the piano's percussive possibilities, the work is tailor-made for Wang's piquant articulations and ecstatic runs, both of which require extraordinary dexterity. The RPO had played Concerto No. 1 only once, nearly 45 years ago.

Admittedly, it was difficult at first to acclimate to Wang's use of sheet music and a page turner's assistance, though it was completely understandable given that these were the pianist's inaugural performances of the works. That said, it did take some of the air out of the first several minutes of Piano Concerto No. 1's "Allegro moderato." Wang's signature energy and panache seemed missing somehow. At a certain point, Stare and the orchestra, as if hanging on for dear life to Wang's tempo, seemed dangerously close to coming detached from the soloist.

The performance was valiant, and the uncertainty of it all was thrilling. Here was a musician at the top of her field, not merely performing, but crafting an interpretation in real time — a rare treat for classical concertgoers.

It was clear that Wang was getting acquainted with the concerto and the RPO simultaneously, and flashes of brilliance broke through even in the precarious moments. By the time the second movement arrived, Wang's intuitive emotional connection to the notes had caught up to her excellent mechanics. A commanding performer, the pianist pulled the listener into the spare, idiosyncratic elegance of Bartok's music as she became more and more in sync with the orchestra.

Wang navigated the tension between dissonance and melodic beauty with a rare charisma. Her precision was unparalleled by any musician I've ever heard play live.

At the end of the piece, the Rochester audience seemed mesmerized, as if slowly coming out of an inexplicably wondrous and lucid dream. There was a palpable, stunned silence that lingered for a few moments before an enthusiastic standing ovation took hold.

In contrast to Bartok's first piano concerto, the composer wrote No. 3 in 1945, at the end of his life. Its use of serpentine melodies and long harmonically rich phrases make for a much different work. Still, it retains Bartok's signature angular melodic style while tempering it with more lyricism.

During Saturday night's performance of Piano Concerto No. 3, Wang was hyper-articulate in her playing, giving each note its due attention. A distinct and sparking sound was the refreshing result. The soloist had certainly settled in with the orchestra, and any uneasiness from the previous performance had dissipated completely. Wang's style was assertive and matter-of-fact; her concentration and poise helped propel her exceedingly fleet fingers all over the keyboard.

Ultimately, the pair of concerts felt like a turning point for both Stare's RPO and its phenomenal guest pianist. Wang will perform Piano Concerto No. 1 with conductor Esa-PekkaSalonen and the Swedish Radio Symphony Orchestra in August, and she'll join the Los Angeles Philharmonic and its Music Director Gustavo Dudamel for Piano Concerto No. 3 next June. But Stare, the RPO, and the local music community as a whole can say with unequivocal pride that she played them here first.